Chermoula is the magic sauce of Morocco. With its combination of herbs and spices, it offers robust flavor and an alluring complexity to dishes featuring chicken or fish or, on the vegetable side, potatoes, peppers and eggplants. Like Indian mint-cilantro chutney, Italian basil pesto and gremolata, and Argentine chimichurri, among numerous international examples, it’s a mash-up of herbs and other ingredients.

The chermoula that I made for this feast uses only cilantro, but I’ve made it with a combination of cilantro and parsley. It also contains smoked paprika, cayenne pepper, toasted cumin seed, garlic, and ginger, all ground to a paste and thinned with lemon juice, champagne vinegar and olive oil.  A jar of this will keep for a long time in the refrigerator but it’s so good that it’s typically used up quickly. 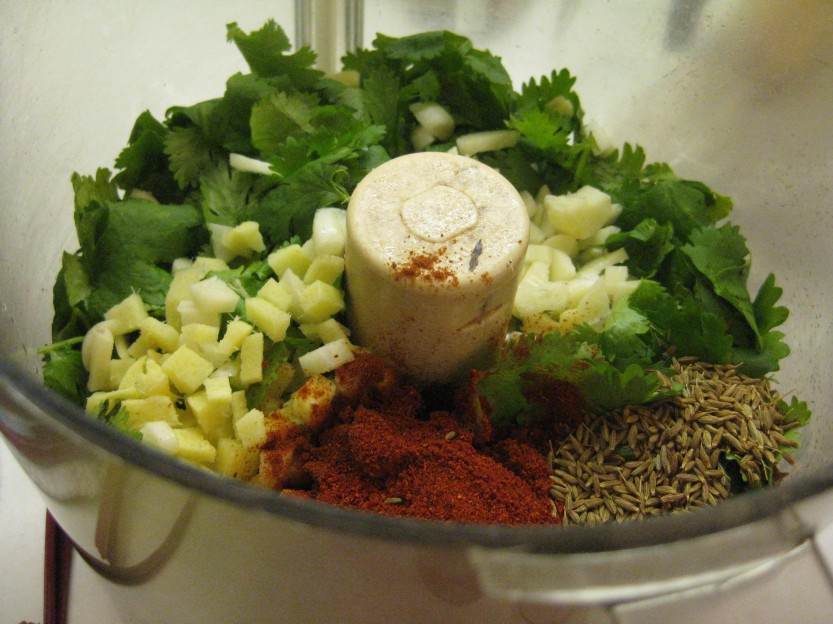 The other significant ingredient in Moroccan food is preserved lemon, which is made by marinating lemon quarters in salt and lemon juice for a couple of weeks. Drat, I recently discarded what was left of my last batch and hadn’t started a new one. However, I remembered that Mark Bittman of the New York Times had devised a quick pickle that could substitute, so I tried it, with great success. He combined diced lemon peel and flesh with salt and sugar and let them marinate for several hours. The result wasn’t as pungent as the real thing, but the crunchy lemon peel added the same twang. 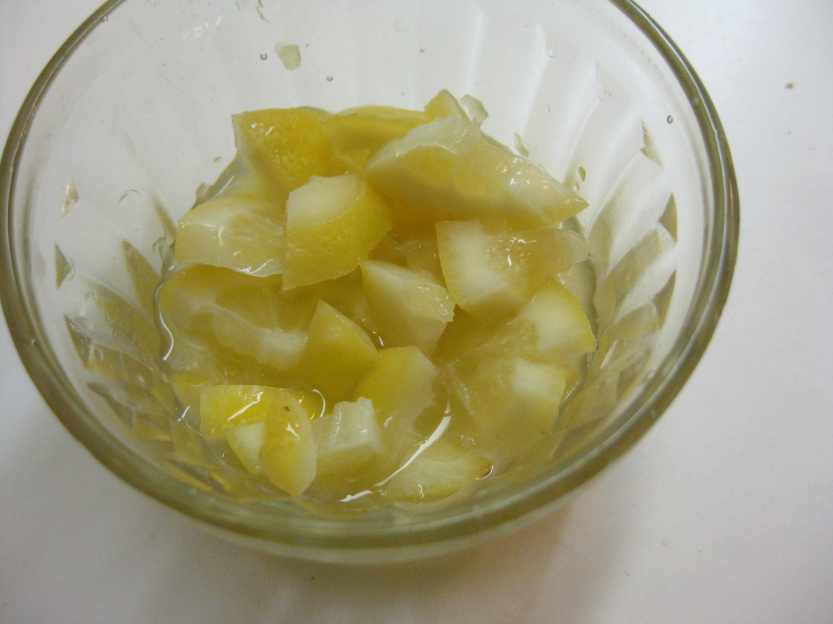 As for the meal, I’ve wanted to make this since March when I read Gail Monaghan’s Wall Street Journal column during a business trip. While the Wall Street Journal is not normally considered a bastion of culinary advice, Monaghan is a good cook and a good writer and her column is consistently informative. She recounts many visits to Morocco, and in the highlights of one, a baked fish made by her host’s splendid cook.

It’s a bit of a project, but not complicated or difficult. It took me a half hour in the morning and a little over an hour in the evening, including baking time.  In the morning (or the day before), make the chermoula and slather it all over the fish, letting the fish marinate for at least 4 hours or overnight. (Note that if you marinate the fish for more than four hours, you should pull it out of the refrigerator an hour before cooking to bring it close to room temperature.)  Also, make the lemon pickle if you don’t have preserved lemons on hand. 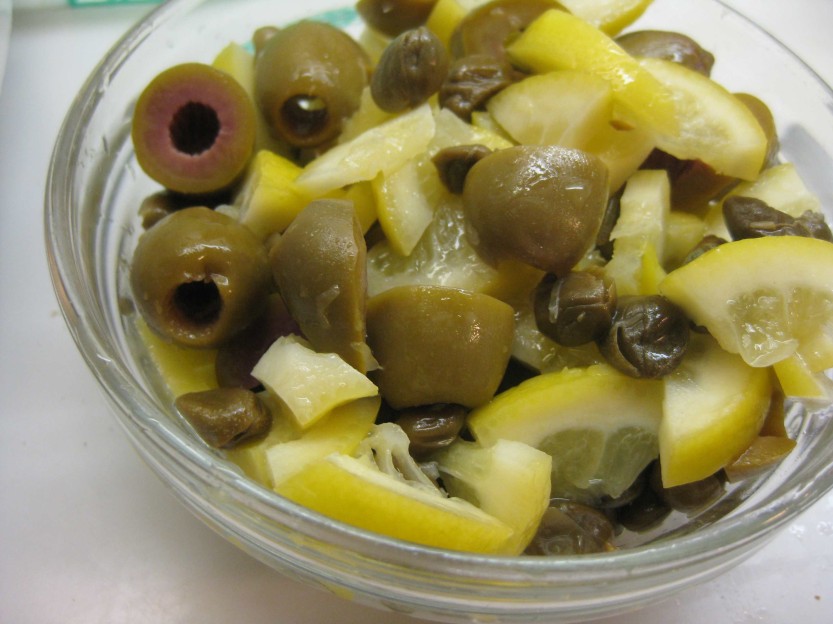 A few weeks ago, I made a homey potato dish layered with zucchini and peppers and remarked that I sometimes bake fish on top. This dish uses a similar method, but rather than cook everything together, sliced potatoes are baked in 450 degrees until crisp before the rest of the ingredients are added. Topped with the fish and then sautéed peppers, onions and garlic seasoned with preserved lemons, salted capers and olives, the dish is baked until the fish is cooked. 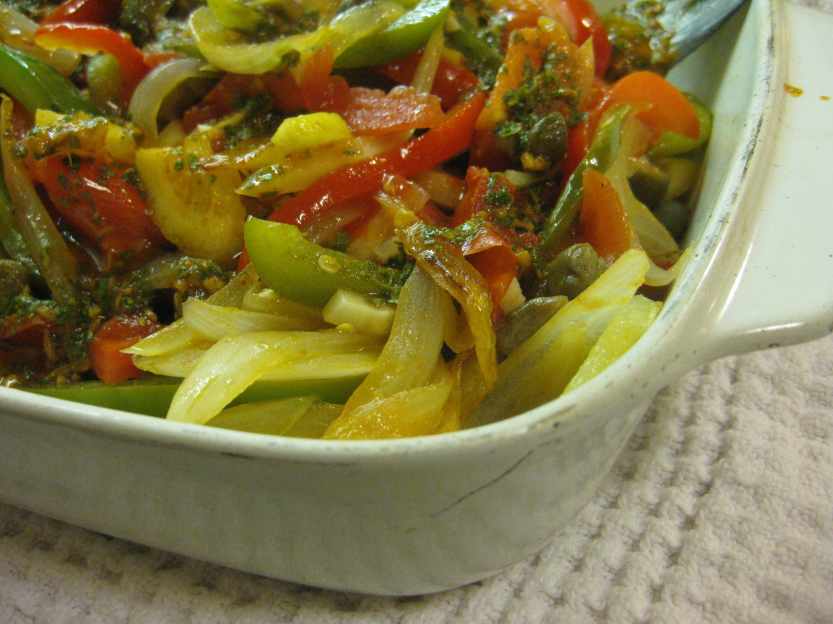 I had a whole sea bass weighing 1½ pounds, but you could use a much larger fish if you’re feeding a crowd. You could also use fish steaks or filets.  In my case, I gauged the pan and the amount of potatoes on the dimensions of the fish, so this made a lot more vegetables than necessary. No worry since the leftovers are delicious. They make a satisfying meal crisped in a pan and topped with a poached egg and a drizzle of chermoula.

In fact, this could easily be a vegetarian dish if you leave out the fish. Ha.

1 red or orange pepper, cored and sliced into ¼ inch strips

At least four hours (up to a day) before you want to serve the dish, place the fish in a glass pan large enough to hold it in one layer. Coat the fish thoroughly with chermoula, including the inside if using a whole fish. Cover and refrigerate, turning it once during the marinating process. Remove the fish from the refrigerator and let it return to room temperature, about an hour before you’re going to prepare it if it has been marinating for longer than four hours.

Heat the oven to 450 degrees. Toss the sliced potatoes in 3 tbsp of the olive oil and place them in a heavy roasting pan large enough to hold the fish in one layer. (I used an enameled cast iron roasting pan.)  Cook the potatoes, turning once, until crisp and lightly browned, about 25 minutes.

Meanwhile, in a large sauté pan, heat the remaining 3 tbsp of olive oil and add the onions and fresh peppers. Saute over medium-high heat to wilt them, about 10 minutes. Add the hot peppers and tomatoes and cook them until soft and well combined with the onion-pepper mixture. Add the olives, capers, and preserved lemon or lemon pickle, stirring and cooking for about 2-3 minutes. Remove from the heat.

Place the fish, with the chermoula that clings to it, on top of the crisped tomatoes. Top with the pepper-onion-tomato mixture and pour on any chermoula remaining in the marinating pan.

Bake until the fish is tender, about 25 minutes for a 1½-2 lb fish, and longer for a larger fish. Let the dish cool for 10 minutes or so before serving. It is best served warm rather than hot.

Disassemble the dish, and relayer it onto a serving platter, sprinkling the top with fresh cilantro. If serving a whole fish that has not been boned, slice it carefully along the spine, head to tail to release the filet on one side of the fish. The backbone should be taken out in one piece, but if stubborn, turn the fish over and over and slit the other side of the bone.

This makes chermoula that has the consistency of salad dressing. If you want it to be more paste-like, omit the water.

Process all ingredients except the salt in a food processor until smooth. Adjust for salt. Makes about 1½ c. This can be stored in the refrigerator for several weeks.

If the lemon is waxed, plunge it into boiling water for 20 seconds. Remove and scrub the skin to diminish the wax. Make sure it’s thoroughly dry before proceeding. Chop the lemon, peel and flesh, into 3/8 – ½-inch pieces and combine with the sugar and salt. Let sit at room temperature to cure for 3-4 hours before using. It improves as it sits and is even better the next day.