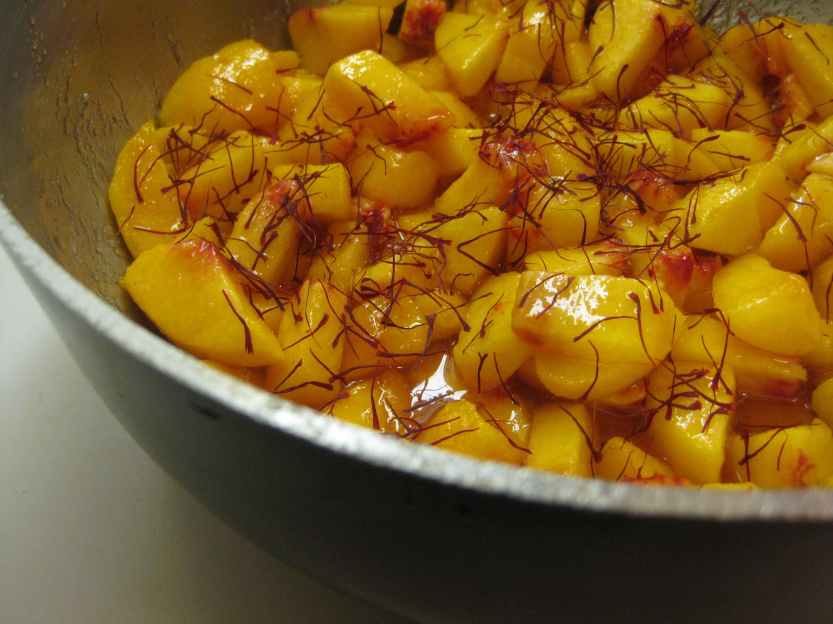 Peaches are so cloying that I look for ways to make them more tragic. Preserve some of their Doris Day countenance but reduce the sweetness in favor of an earthier character. This jam does just that. It’s another inspiration from my new go-to guy Paul Virant and his excellent book The Preservation Kitchen. He says that, “The saffron turns simple sweet peaches into something quite different – earthy, musky, savory.”  Definitely. Like many of Virant’s concoctions, this is intended to be used as an ingredient or an accompaniment to savory dishes rather than simply adorn a piece of breakfast toast or fill a thumbprint cookie. Although my non-sweet tooth might just like it on toast, I am whisking it into vinaigrette to serve over colorful tomatoes.

I added a little salt to Virant’s recipe since the jam seemed a little flat. Next time I will increase the sugar just a tad, or use small yellow peaches instead of the giant ones I bought at our local orchard. I’m writing the recipe the way I think it would be improved.

Peel the peaches by plunging them first into boiling water for a few seconds and then into ice water. The skins will slip off easily. Chop the peaches, dropping them into a large saucepan in which you’ve placed the lemon juice. Add the sugar, saffron and salt and bring the mixture to a boil over high heat. Lower the heat to medium and cook the peaches until they have rendered their juice, about 10 minutes. Cool, cover with crumpled parchment paper and refrigerate overnight.

Prepare the kettle, jars and lids for water bath canning.

Bring the peach mixture to a boil, reduce the heat until medium, and cook until thick, 10-12 minutes. Spoon the jam into the prepared jars.

Process the jars for 10 minutes after the water returns to a boil. Turn off the heat, remove the lid and let sit for 5 minutes before moving the jars to a counter to sit undisturbed until cool.