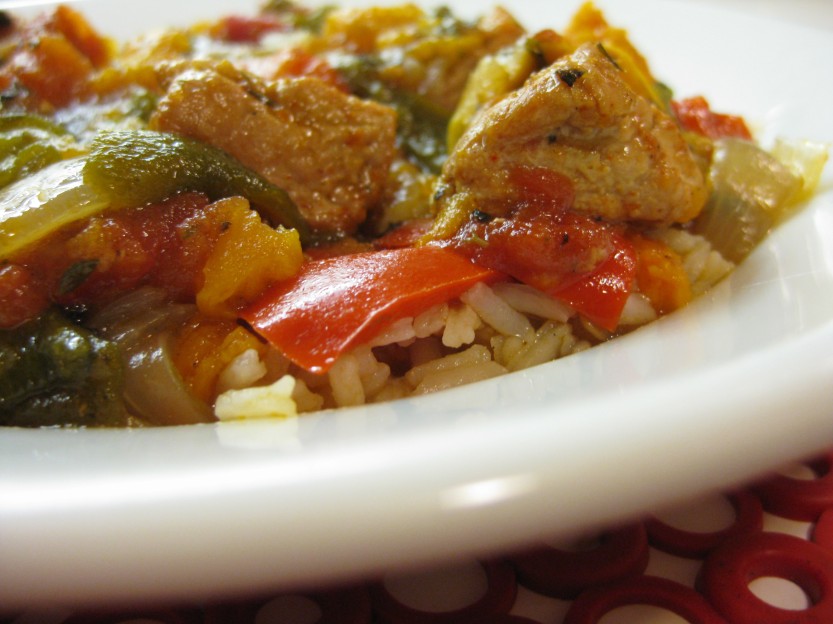 I am so lucky to live in an area (halfway between Philadelphia and New York) where local food is plentiful and varied, frequently organic, always fresh and relatively well priced. In addition to orchards and farms that grow fruits and vegetables, we have local farms selling milk, eggs and cheese, local beekeepers, local winemakers, local mushroom farms, local day boat fisherman who truck their catch to the farmer’s market, even a nearby flour mill.  There also are a few local farms that raise poultry, pigs, lambs, and beef in a sustainable, responsible way. So for me, being a locavore is relatively easy, even all year round, especially since I preserve foods in the summer and fall for my pantry.

A couple of weeks ago, I purchased some wonderful cubes of local pork, which I dreamed of stewing with abundant paprika and sauerkraut from the pantry. Dream is the right word since I forgot that I did not put up any sauerkraut this year. However, indulging my sometimes ridiculous habit of raiding the “soup bin” at the local health food store (where slightly bruised or otherwise less-than-perfect produce sells for a pittance a pound), I had scooped up some organic poblano peppers and a red bell pepper, neither of which was local. But they sure were thrifty.  Believe it or not, I still had sweet potatoes from our CSA farm and wanted to use the last of them. Plus whole tomatoes that I had canned.

I made a delicious and satisfying stew that followed my instinct and no recipe. While I call this a pork stew, truth be told, it had more vegetables than meat. While I’m not adverse to meaty stews, I prefer to have the meat present but in a secondary role. I thought that the poblanos made the stew a little bitter, so I added a teaspoon or so of brown sugar, which gave the stew another dimension of flavor.  I served this on rice but could have added black beans instead.

6 plum tomatoes, chopped, plus a little juice from the jar or can (or use fresh)

½ tsp adobo sauce from canned chipotle chiles (or use a little smoky paprika or pimenton or add a little ancho chile, softened in hot water since ancho chiles are poblanos dried)

Preheat the oven to 300 degrees. Sprinkle the pork cubes with paprika and brown them in batches in a little oil, removing them to a small Dutch oven. Clean out the pan, add a little more oil and the onions and cook for a few minutes until translucent, then add the peppers and stir to combine. Add the tomatoes and cook for a minute or two. Add the vegetable mixture, the cubed sweet potatoes, and a dab of adobo paste to the pork, pour on chicken broth just to cover, and cook in the oven for 1½ hours. Check every so often to make sure the liquid is simmering not boiling. If it’s boiling, turn down the heat. Otherwise the pork will dry out. Taste the broth; if it seems bitter (from the poblanos), add a little brown sugar.