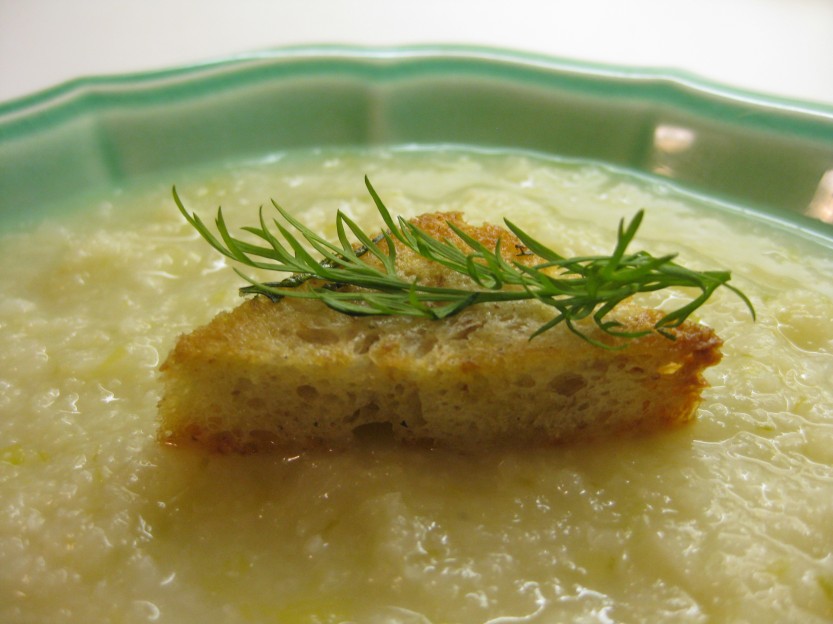 Whey, a by-product of cheese-making, is the thin liquid that’s left after the curds are removed. The other day, I made a batch of fresh cheese that resembles ricotta and saved the whey for soup. This is a simple, fresh and clean-tasting soup that takes all of 15-20 minutes to make. You basically just simmer the sliced vegetables in the whey and puree them.

I have made this with potatoes and leeks, and also with celery, rather liking the paleness and light green tinge. The whey is greenish, from the riboflavin in the milk, which I have to admit takes getting used to. It’s low fat since the milk fat gloms on to the curds. Float some snipped herbs or a crouton on top and you have a light and flavorful low-calorie lunch.

Whey Soup with Cauliflower and Leeks

Herbs, croutons, or other toppings

Cook the leeks slowly in butter until translucent, add the cauliflower, stirring to coat. Add the whey, cover the pot and simmer for about 15 minutes, or until tender.  Puree in a food processor or in the pot using an immersion blender. Season to taste. Serve semi-hot garnished with snipped herbs and/or croutons.

Making croutons in the oven: brush olive oil on bread, salt lightly, add herbs if desired, and bake at about 450 degrees, turning, for about 5-7 minutes or until brown and crisp to your liking.

Making croutons on the stove: heat olive oil in a shallow pan until hot, add bread and fry it until golden, turning so that all sides brown. Sprinkle the hot croutons with herbs and salt (or Parmesan cheese).