A cooking challenge organized by Meg of Grow and Resist and Briggs of Oh Briggsy in which we explore a featured cookbook each month.  The selection for July is Gran Cucina Latina, The Food of Latin America, by Maricel E. Presilla.

The closest I ever got to Latin America was a soccer game. That is, not counting a day trip to Tijuana or regular visits to the Ironbound neighborhood of Newark. I’ve rarely eaten, much less made, genuine Latin American food. At which statement, my Guatemalan friends promptly asked, laughingly, “So what did you eat when growing up?” For me then, reading and cooking from Gran Cocina Latina became a revelation as well as an adventure.

I got ambitious at the beginning of the month since the 4th of July fell on Thursday and it seemed as though a long weekend holiday stretched out ahead of me.  Normally, I would have identified some gargantuan project that requires OCD to tackle, like reorganizing all the closets, or the pantry and everything in it. But none were as interesting as a dive into Gran Cocina Latina. The word “gran” (also “grande” depending on the word that follows) connotes big, and this book is big, over 900 pages with small type and not a lot of illustrations. It took a few forays into it to figure out where to start, other than simply at the beginning.

The beginning was actually quite interesting.  I hadn’t considered Latin American food in the way that Maricel Presilla presents it.  The most fascinating part of her thesis, to me, was the influence that medieval cooking had on Iberian colonialism and how that uniquely blended with New World foodstuffs and foodways into a complex and culturally diverse and locally affected mélange of techniques, ingredients and flavors.  I see how her knowledge of medieval history comes in handy, since I too once considered myself a medieval scholar (really). I wrote an obsessively focused thesis on a doodle in the margin of a 4th century English psalter when I was really dreaming about Byzantium.  I can thus associate the food of old time Spain and Northern Africa and the spread of Moorish influence. But I never associated it with Latin America, just through my own ignorance. Now I can say, “Of course.“

I started my adventures with a warm-up, making some of the background staples, flavorings and bases used throughout the book. These included Achiote-infused Oil, page 89, and a chicken broth Presilla calls Salpimentado, page 536, which I altered to produce shredded chicken meat as well as a spiced broth with a Latin American allure. The broth was as powerful an association with regional food as the gingered chicken broth was to Asian cooking in an earlier Cook the Book selection, Asian Dumplings.

I was haunted by the concept of the melding of times and cultures. What would capture the concept?  I decided on mole, specifically The Famous Mole Poblano of Santa Rosa, page 771, supposedly the godmother of all moles, with an apocryphal story of its origins in hastily assembled ingredients on hand, thrown together at the last minute. Hardly. Presilla denounces that and says, “When you look back at this dish, it is … built on the classic principles of both Spanish and Pre-Columbian Mesoamerican cooking.” The spices are decidedly Mediterranean, reminiscent of Moroccan cooking (so there’s a Moorish commonality in all of this).

This was a handful of a dish to make, all the better for having a little extra time. As a technique, it had a rhythm and logic to the sequence, once you made a complete “mis en place,“ and a second layer of “mis en place” as each ingredient group is cooked and then either soaked or ground.  Four types of dried chiles (lucky I could source those) are de-seeded, with some seeds reserved for toasting, heated on a cast iron griddle and soaked in hot water for about a half hour, coincidentally about the time it takes to ready the other ingredients. Then come the spices, tossed on the griddle and ground, followed by the nuts and seeds prepared the same way. Next the bread thickeners, then the seasoning vegetables (tomatoes, onions, garlic), and then the fruit. Phew. After two big purees are made – one of the soaked dried chiles, and the other of the chile soaking liquid and the rest of the ingredients — the chile puree is fried in oil or lard for 20 minutes, combined with the second puree and cooked for another 25 minutes. Finally (I bet you never thought we’d get to finally), sugar, chocolate and salt finish it off.  So then what? I made a chicken version of Turkey in Mole Sauce, page 781, and served it with Mexican Rice, page 302. I have lots of leftover mole for other uses. Luckily I halved the recipe.

Presilla’s method of cooking rice, by first rinsing the starch off the grains, and then cooking it in two stages – hot and fast, then low and slow – produces a light and fluffy result, which I was happy to reproduce in Brazilian-Style Simple Pilaf, page 298. Infused with a bay leaf, this rice was aromatic, and the perfect accompaniment to Shrimp in Coconut Sauce in the Style of Bahia,  pages 621-22.  I am fond of Brazilian food, but have little experience cooking it, so this dish was a good start and an opportunity to use the achiote-infused olive oil. This will definitely become part of our repertoire going forward.

Same with Scallop Cebiche in Tumbo Juice,  page 486. I couldn’t pass up the chapter on Cebiche, especially not in summer. We get very fresh local scallops here, so this was a natural. Searching for tumbo juice or its substitute, passion fruit puree, however, was a challenge. It led to an interesting discovery: the frozen food aisle of the grocery store, where I found skinny little pouches of all kinds of fruit puree meant for Latin American cookery. I also found bottled bitter orange juice. However, not in time for this dish, which I made with a combination of lime juice and orange juice. The method of “purging” onion in salted water tamed the undesirable rawness of the onion, which then became slightly pickled with citrus. Refreshing in the heat wave of summer.  A winner.

I just had to make something with epazote, since I have an abundance of it in my courtyard garden, some growing in a pot where I planted it but mostly growing up through the cracks in the pavement where it self-seeded.  I was amused that the author has a similar situation in her New Jersey garden, as she writes in her Chapter 2 introduction to the Latin Kitchen.  The resulting Black Bean Soup with Epazote and Chipotle, page 506, was quite extraordinary although the chili puree ultimately masked the herb. 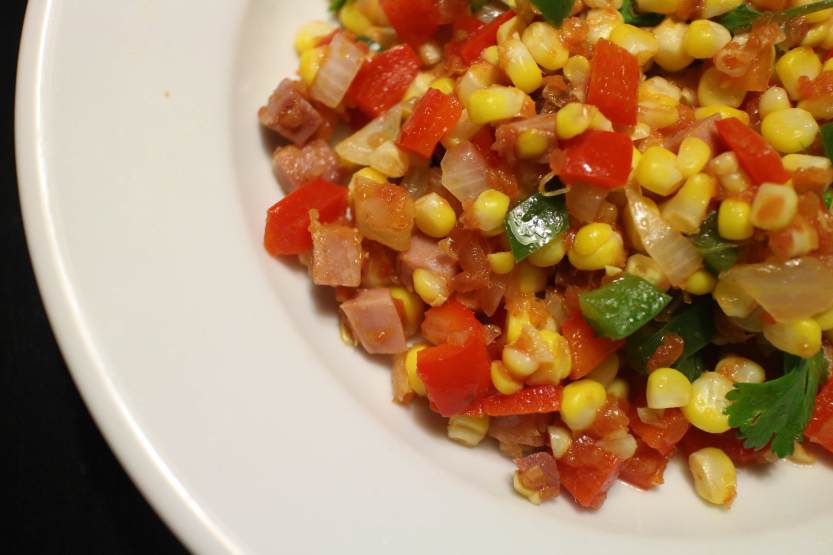 Finally, squash, corn and beans are plentiful at this time of year, so I had to explore Chapter 6.  You’re always safe with seasonal ingredients and since corn is a staple in Latin America, I decided to make Dominican-Style Corn Stew, nicknamed “Parrot’s Crop,” pages 238-39. This combined yellow corn (organic, from our CSA, bravo!), green and red peppers, a light tomato sauce and smoky ham. The colorful appearance mimics the Dominican fascination with their beloved, gorgeous Hispaniola parrots. I love food with a story, even if it’s as simple as a title. (I might question the rice and bean dish called “Moors and Christians” as not too PC, but I get where it originated.) Stories about food tie us to history and are a reminder that cooking is as much a cultural act as it is subsistence. There’s so much more to explore in this encyclopedic volume and I’m glad I now feel comfortable navigating it. Many thanks to Meg and Briggs for bringing it to our attention.