A cooking challenge organized by Meg of Grow and Resist and Briggs of Oh Briggsy in which we explore a featured cookbook each month.

Phew. I was getting bored without a cooking challenge. Thanks to Meg and Briggs for putting this together. What I mean by challenge is the focus of researching, creating, considering, and commenting, not the challenge of the actual cooking. However, the latter is exactly what led me recently to embrace Dorie Greenspan’s Around My French Table, literally on my knees, very grateful. 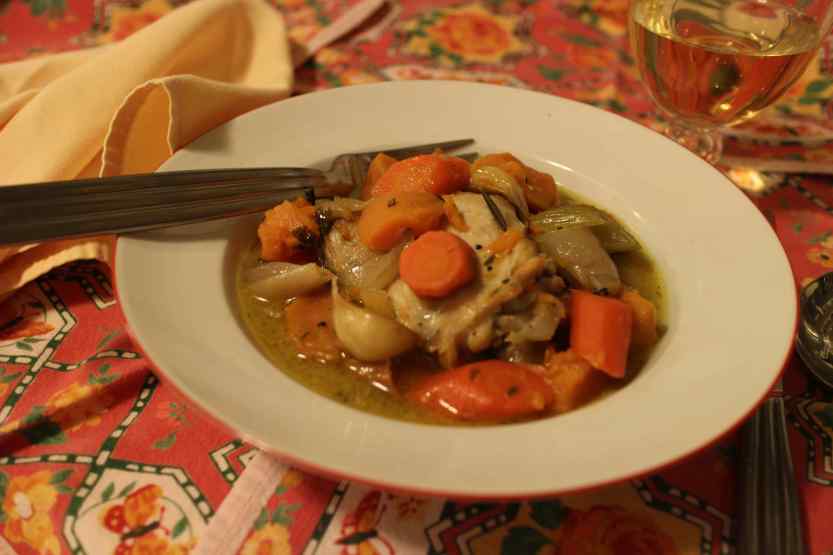 You see, we had three Christmas celebrations this year, two planned and one spontaneous, which nearly threw me for a loop. The second planned one, which I’ve written about before, involved a portable feast for 24, which was prepared at our house in New Jersey and carted to Maryland, to be cooked and served midday. This would have been routine for me except for the spontaneous Christmas the night before. My two most favorite women in the world decided to visit, on a Thursday night, and bring their new beaux, one we’d scarcely met and the other not at all. Obviously, I couldn’t say no, so dinner and Christmas stockings it would be. Yikes.

Normally, some trusty communal dish would come to mind, but given that the meal necessarily had to be gluten-free and dairy-free and assembled in between intermittent meetings at my office, I was scratching my head. On top of that, our dishwasher broke, the kitchen flooded, the dog chewed the floor, and I started to panic. Enter Dorie.

I’ve owned Around my French Table since it was published. While it’s not a cookbook that I immediately wanted to cook my way through (I save that for the more esoteric ones like Jasper White’s 50 Chowders, ha), I dip into it now and again when I want a reliable recipe I don’t have time to test. The same goes with her Baking from my Home to Yours, which saved the day when I was baking muffins for 75 and needed an immediate infusion of foolproof ideas.

For the spontaneous Christmas dinner, I had in mind a Moroccan chicken dish, but was worried about the accompanying grain. Couscous was allergy material, rice was risky given one fussy attendee, and quinoa would have been fine but I couldn’t face it. Consulting Dorie, I came across “the garlic and lemon version” of chicken in a pot (page 206 and the cover image). Perfect, an all-in-one dish that didn’t need any accompaniment and that I could make with all local organic ingredients: whole shallots, whole garlic cloves, sliced carrots and sweet potatoes from our CSA, chicken and white wine from local farms, and herbs from my pot garden. I had excellent homemade chicken stock in the freezer and a jar of preserved lemons that I made a couple of months ago. I had a giant Dutch oven with a terra cotta lid, so I didn’t need the dough strip to seal it (though I added a couple of layers of foil between the base and the lid to make the seal). Virtually no shopping, whoo hoo.

My analysis of the recipe before I cooked it is that the lovely lemony broth would benefit from the flavor of chicken on the bone and some modicum of chicken skin, but that the skin would turn the liquid unctuous and oily. I therefore wanted to make the dish early enough to degrease it, which turned out to be necessary, and also to remove the skin before serving. In addition, I was skeptical of cooking cut-up chicken and veggies for 55 minutes at 450 degrees in my spun aluminum and terra cotta Dutch oven, so I started the oven at 450 for 10 minutes, turned it down to 350 for 40 minutes, and then to 300 for the balance. (I made this again this weekend, and I was right on all counts.)

Dorie’s introduction to the book characterizes the recipes as a “mix of old and new, traditional and exotic, store-bought and homemade, simple and complex,” and this one proves her right. What I loved the most was that I could serve the chicken stew in soup bowls with crunchy bread (yes, some gluten-free, sigh) that the guests could spread with the whole roasted garlic in the stew and use to mop up the delicious liquid. A large bowl of escarole and avocado topped with Dorie’s orange and olive salad (page 117) occupied the middle of our table. And we all sat around, with this delicious “elbows-on-the-table food,” accompanied by excellent wine and even better conversation. We had a grand time. Now I know why she called the book, Around my French Table.  It fulfills the promise, trust me.

Now I want to cook more from this book.