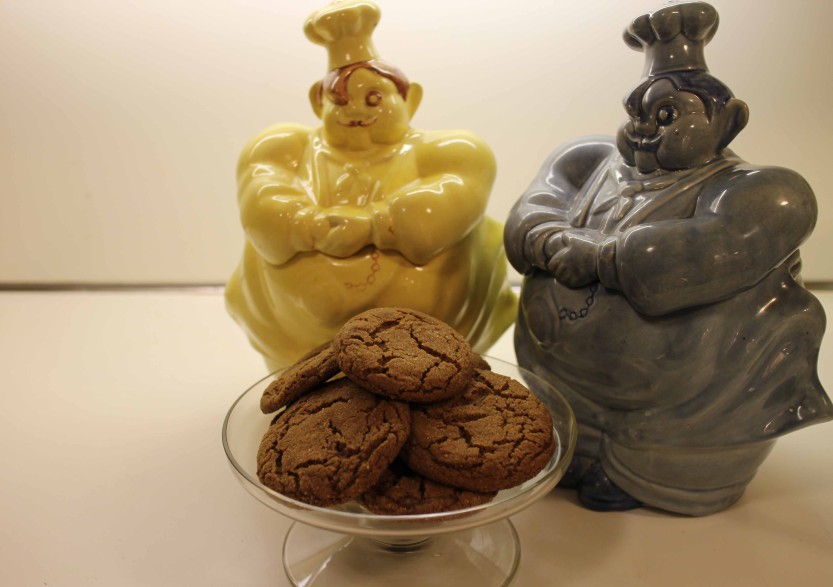 We have a few cookie connoisseurs around here. They – all of them, including Chef Pierre Bleu and Chef Pierre Jaune – like nothing better than a bellyful of freshly baked cookies.  With virtually no sweet tooth myself, I tend toward homey, easy cookies unless it’s holiday season when I might go all out if I have the time. These molasses spice versions fit the description nicely, produced lightly spiced cookies that are chewy and a little crackly from the sugar topping. A great one for the repertoire. They last for a few days in an airtight container unless they come in contact with big or little hands.

The recipe originated in Cook’s Illustrated Magazine and I remember that it was not written as well as it could have been, which of course did not affect the cookies.  The reason I recall that is that Cook’s prides itself in impeccable directions and testing, testing, testing. That’s why Chris Kimball refers to himself as America’s Test Kitchen. So when I found that it had been rewritten for The New Best Recipe by the editors of Cook’s Illustrated, I was delighted. Now that’s more like it. FYI, this one called for regular all-purpose flour whereas the original called for unbleached; I’ve done both and they’re fine either way. I tinkered with the spices a little, just because…

Heat the oven to 375 degrees. Place an oven rack in the center of the oven. Cut parchment paper to fit into 2 large baking sheets (you’ll bake each one separately).

Whisk together the flour, baking soda, spices and salt and set aside.

Place the ½ c of the granulated sugar in a wide shallow bowl or plate.

Combine 1/3 c of granulated sugar, the brown sugar and the butter in a large mixing bowl and beat them with an electric mixer at medium-high speed together until light and fluffy, about 3 minutes. Scrape down the bowl. Reduce the mixer speed to medium-low and add the egg yolk and vanilla until combined, about 30 seconds. Add the molasses and beat for another 30 seconds. Fold in the dry ingredients until just combined.

Scoop about a tablespoon and a half of dough and roll it into a ball about 1¼ inch in diameter. Making about 4 balls at a time, roll them in the sugar and place them on the baking sheets, leaving a good 2 inches between them.

Bake each sheet separately, leaving them in the oven for 11 minutes and turning the sheets front to back half way through. The cookies should look cracked and raw in places. They’ll finish cooking while they cool and you want them to remain chewy.

Cool the baking sheets on a rack for about 5 minutes before removing the cookies to a rack to cool completely. Store in an airtight container.