A continuing series on weekly meals that use sustainable, organic, local and ethical food during the challenging winter months. 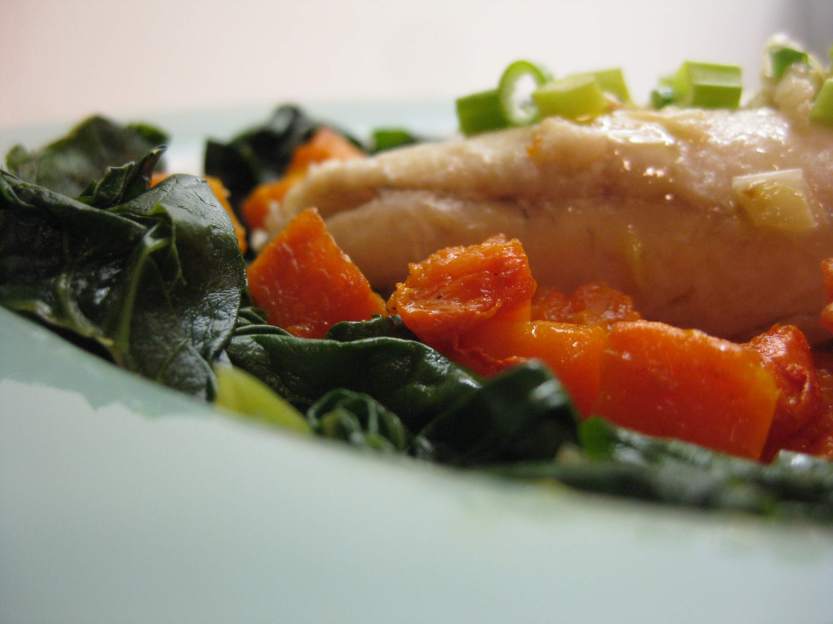 After all of the turkey and other rich food of the past weeks, we were longing for the lightest, simplest yet tastiest supper. David Tanis, who writes a column in the New York Times called “City Kitchen,” had the same reaction and created a lovely meal of cod with sesame oil and ginger accompanied by spinach lightly cooked in garlic and ginger.  With what I have on hand, I thought, sure, I could adapt this (meaning start all over but capture the idea) for the Dark Days Challenge.  This idea was possible because of three revelations in my local cooking sphere.

One, I found out about a local organic farm that produces Hawaiian ginger right here in New Jersey, only a few miles away. The baby ginger was relatively short-lived in the market, but there long enough for me to try it on anything (amazing) and to make ginger-garlic paste, a staple in Indian cuisine. And also Parsi cuisine, as told by Niloufer Ichaporia King in her fascinating book, My Bombay Kitchen. Some of the ginger has been consumed and some stashed in the freezer for darker days.  On a lark, I planted a piece in a pot set in a warm spot in the house.

Two, I grew Asian celery in my own little in-town garden, which uses organic principles. Pascal celery is one of the so-called “dirty dozen” vegetables that have a terrible record of being grown with fertilizers, pesticides etc. While I certainly buy organic celery from time to time, and our CSA grows it (though it’s been a frequent crop failure), I felt I needed a reliable source for the incomparable flavor. Celeriac stalks are also a good choice and a typical go-to for me, but because of our awful growing season, they too have been scarce. The Asian celery has been a great herb, and with the stalks now becoming more prominent, a credible vegetable. I used it in dried celery salt that I stashed away earlier in the season.

Three, our local (3 blocks away) health food store stocks Finger Lakes Butternut Squash Seed Oil from Stonybrook Wholeheartedfoods. This regionally produced oil is astonishing good, was encouraged by the good fools at Cornell, and is produced from non-GMO seeds from a farmer friend. The label doesn’t say it’s organic, but this store sells almost exclusively organic products and from what I can tell, it’s responsibly produced. It’s from Geneva, NY, a little outside my 150-mile radius but not by much. Just like the search for locally grown as well as milled flours, the search for similarly produced oils is in-bounds for me in the Dark Days Challenge.  For purpose of this recipe, it worked perfectly as a nutty substitute for Asian sesame oil, similar in viscosity and but cleaner in taste.  I highly recommend you search it out if you’re from the mid-Atlantic region. 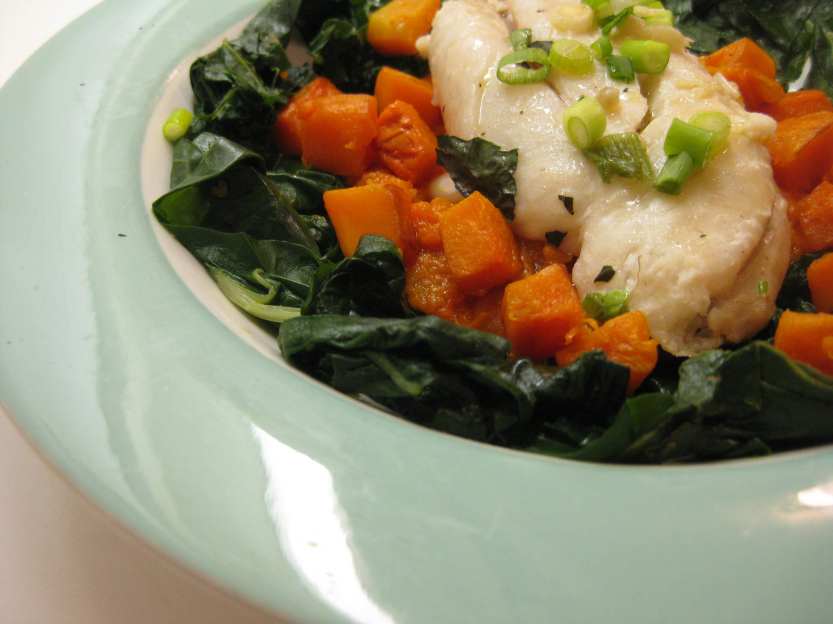 Finally, I should say that the fish I used is a fluke flounder caught by a Jersey shore fisherman. While the fish watchdog Monterey Aquarium classifies fluke flounder as problematic, that’s west coast perspective. Local wisdom, backed by watchdog groups, agrees that the Atlantic fish is being treated responsibly. 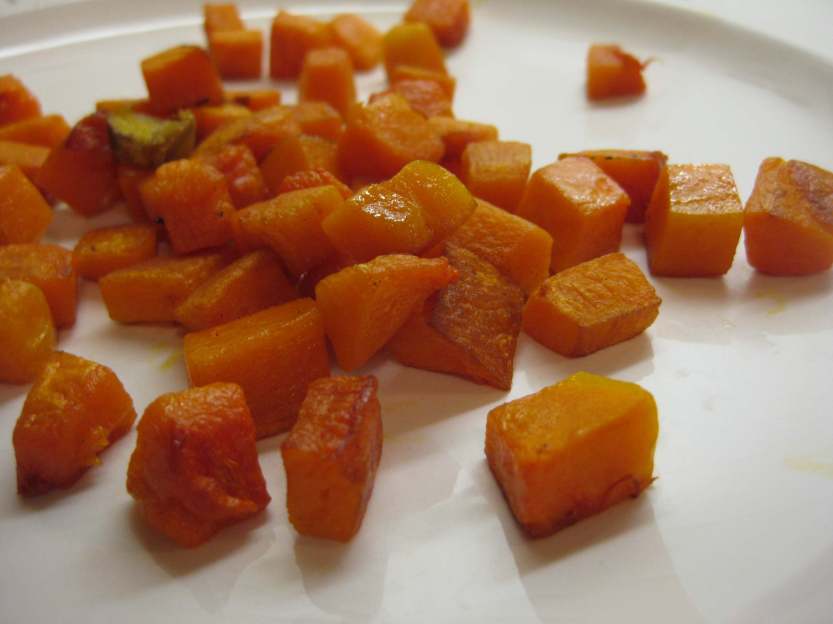 The rest of the ingredients are no-brainers for us: butternut squash from our CSA gently braised in ginger peels and a second version baked in the oven with squash oil; gorgeous garlic from our CSA minced with ginger; organic scallions from a local farm market; chard from my garden.  This was a lovely and refreshing dish that lightened up the dark days, at least for this week.

Smear the garlic-ginger paste and squash seed oil on both sides of the fish and let it marinate for 15-60 minutes in a baking dish.

Heat the oven to 375 degrees. Place the celery leaves at the bottom of the baking dish, place the fish on top and sprinkle the minced scallion and celery stalks. Cover the dish with foil and bake for 10 minutes or until the fish is cooked through.

An alternative for roasting is a simple shall braise of squash cubes with the peelings of ginger in the water.

Wilt green chard leaves (reserve stalks for another use or shallow-boil them) in a small amount of water. Toss with ginger and butternut squash seed oil.