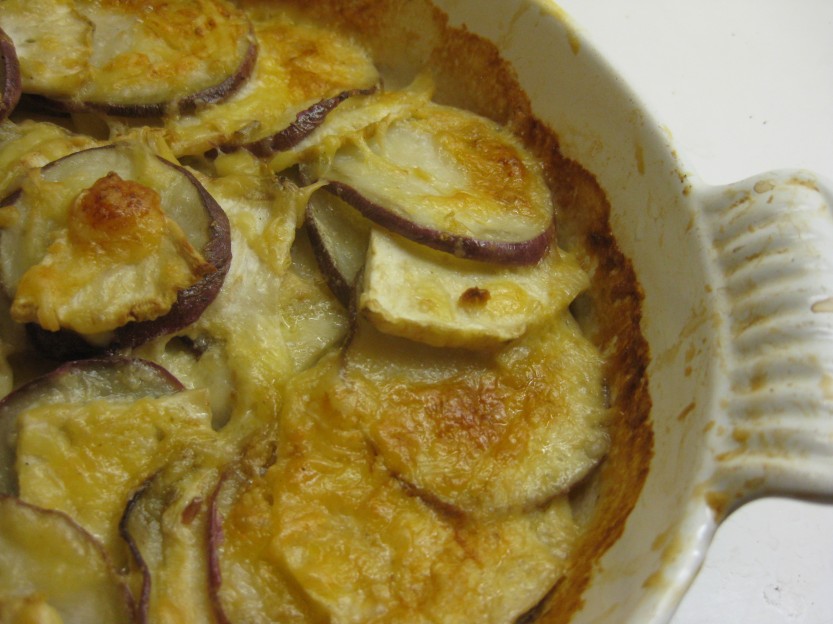 With daylight savings time upon us, the dark days don’t seem so dark anymore, except in the food department. We are still diligently working away at our plentiful roots and winter squash, among many other local provisions put away in the mad stash of late fall. This lovely, aromatic combination of thinly sliced celeriac and potato baked in milk and cream can be eaten as a meal or a side dish, and is adaptable to the addition of other ingredients such as sliced onions or bits of ham or bacon. There was a similar recipe published in the New York Times recently but this is my standard way of making this. I heat the potatoes and celeriac in warm milk and cream with a little salt and garlic, and then turn them into the baking dish.  This keeps them from discoloring and also makes them cook more evenly. I used waxy potatoes here and didn’t peel them because I thought their texture would be more compatible with the celeriac than floury potatoes.  Adjust the milk to the consistency of the potatoes.  I used a local cheese that reminds me of Gruyere.

1 small or ½ large knob of celeriac

Preheat the oven to 350 degrees. Butter or oil a baking dish. Bring the milk and cream to a simmer on the stove, add the garlic and salt, and turn off the heat. Prepare the potatoes and celeriac by peeling them (or leaving the skin on the potatoes if you want) and slicing them thin, dropping them in the liquid as you go to keep them from discoloring. Bring the liquid to nearly a boil, adding more milk if necessary. Pour the mixture into the prepared baking dish, neatly arranging the slices on top. Sprinkle with grated cheese and bake for about 40 minutes or until bubbly and brown.