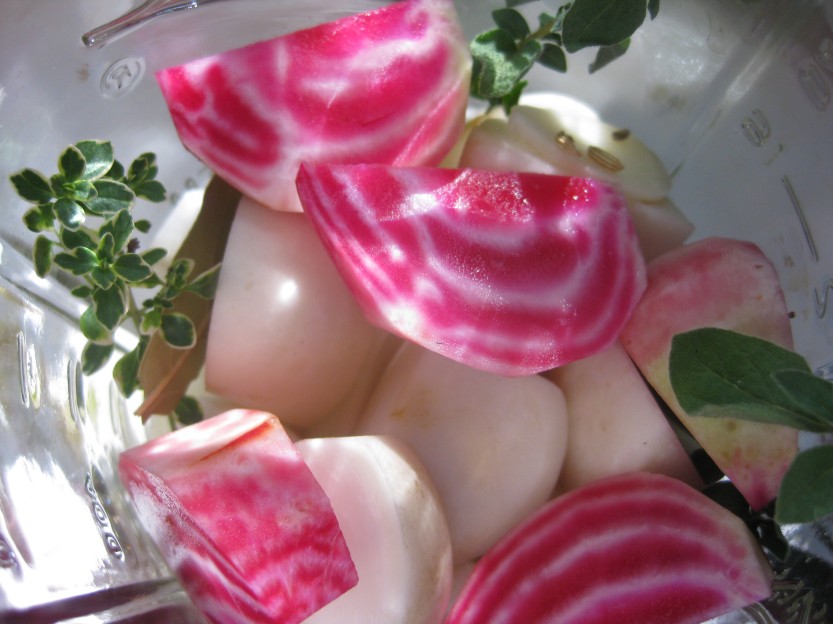 At the beginning of July, when the temperatures start to climb, simple foods served cold or grilled are an antidote to the cloying weather. While I do put up pickled vegetables and other condiments, we don’t tend to eat them throughout the year. Hence my new interest in short-term, small-batch pickling. This one, adapted from David Tanis’s lovely book A Platter of Figs, can be made in two ways: a quick overnight version made by heating the brine and pouring it over the vegetables, or a week-long version in which the brine is unheated.

His recipe is for “Pickled Turnips” and he has an endnote that suggests the addition of a small red beet, omitting the turmeric from the original brine.  I had the freshest, most picturesque light red chiogga beets from our CSA, the ones with the striped rings, so I added enough to fill the jar. Since mine were super fresh, I cut them into the same size chunks as the turnips. If either had been older, I would have sliced them. I used fresh oregano instead of dried and coriander seeds from my bolted cilantro. Tanis used olive oil, which I knew was not going to work well in the refrigerator, so I omitted it, knowing I could add it at the end. The finished product was delicious as part of an antipasto, worth trying again.

Turnip and Beet Pickle adapted from David Tanis, A Platter of Figs

Prepare the turnips and beets. Scrub the turnips but do not peel. Slice a little off the stem and root ends and slice into wedges. Peel the beets, remove stem and root ends and slice them into wedges similar in size to the turnips, or into slices. (You want them to pickle at the same rate and beets will typically take longer when raw.) Place them in a quart jar with the thyme and oregano sprigs and the sliced garlic.

Combine the brine ingredients and pour over the vegetables. Seal with a lid and put on a shelf in the kitchen, turning it over every day for a week. After a week, refrigerate and use within a month.  (I refrigerated the pickles the next day since the house was hot and cured them for three weeks in the refrigerator.)

For an alternative quick version of a turnip pickle, simmer the turnips in the brine for about 8 minutes until cooked but still firm. Cool the pickles in the brine, then refrigerate overnight before serving.