The first year that we decided to be gluten-free and dairy-free for Thanksgiving, I gave up my longstanding tradition of making bread stuffing for the turkey and moved over to a more Southern approach based on cornbread. I had been researching gluten-free baking, so I knew cornbread would be a good option. I used the typical ingredients of celery, onion, thyme, sage, salt and liberal amounts of black pepper, and also added browned sausage. It was bound together by turkey stock that I had made a few days earlier from necks and backs. Some of the stuffing was cooked inside the bird and the rest in its own pan in the oven.  One of the tricks I discovered this year was to mix the stuffing a couple of hours in advance and let it sit, which allows the flavors to get acquainted. (Refrigerate it if the time’s lengthy.) 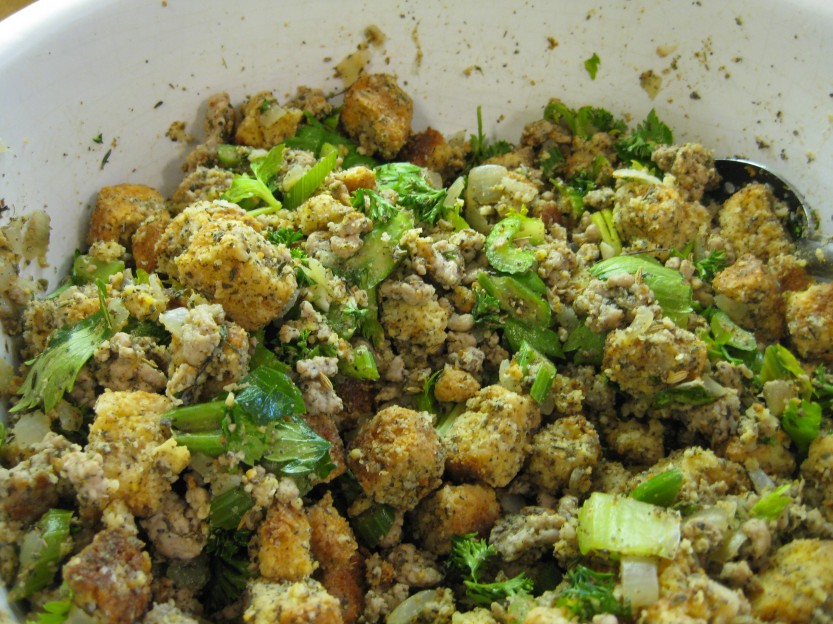 Olive oil and vegan spread (like Earth Balance, which has no dairy or gluten)

Make the corn bread a day or so in advance so that it dries out. Cut it into 1-inch cubes and dry them in a low (275-degree) oven for 20-30 minutes or until quite dry and almost brittle. Break up the sausage into 1-inch chunks and sauté over medium high heat (so that it browns slightly) until cooked through. Remove and drain off excess fat. Melt some vegan spread with olive oil and sauté the onions and celery until softened.

Combine the cornbread, sausage and vegetables in a large mixing bowl, add the celery leaves, parsley, sage, thyme, salt and pepper. Add turkey broth, a little at a time, until the mixture is moist but not soggy, being careful not to break up the cornbread too much (some will crumble, but you will want some cubes to stay whole). Taste and add more seasonings if needed. Let sit for a couple of hours before stuffing the turkey.

This made enough to stuff a 15-pound turkey and to fill a 7-inch shallow baking dish. I added extra turkey stock to the dish (since it wouldn’t get the basting from the turkey) and baked it at 350 degrees for 35-40 minutes.

¼ cup sugar (omit if making it for stuffing)

¼ cup vegan spread (like Earth Balance, or use Crisco)

Preheat the oven to 425 degrees. Grease a 7 x 10 ½-inch (or 9×9-inch) pan. Sift the dry ingredients (other than cornmeal) so combine them well. Cut in the shortening like you were making a pie, until it reaches a sandy texture. Combine the slightly beaten eggs and milk and pour into the dry ingredients, stirring just until combined. Then quickly stir in cornmeal and pour into prepared pan. Bake for 20-25 minutes.

One recipe makes about 8 cups of cubed cornbread. I made two of these, one with sugar and one without and reserved half of the one with sugar for another use.