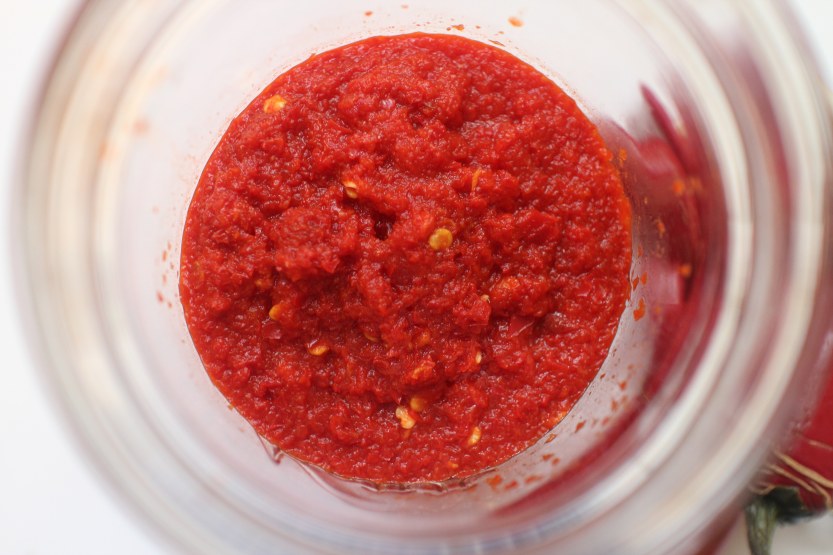 I’ve got the hots for hot sauce. With half a peck of peppers, I held my own red sauce cook-off. Over the past few weeks, I have tried five or six approaches, and there are more to come. Here’s one that ups the ante on Sriracha. It’s more vivid and intense because it ferments.

The sauce is super simple to make. Grind red jalapeno peppers, garlic and salt to a paste in a food processor and ferment it for a week before adding vinegar and lime juice (and a tad of sugar or honey) for a second week-long ferment. Other red peppers such as Fresnos would also work. The sauce is very versatile, and addictive. The first batch was so popular that I’ve already started three more. I also found that peppers fermented for one week were fine without the vinegar and lime juice. It’s just a fresher condiment, and more raw.

I saw the recipe online at Bon Appetit (“Fresh-Chile Hot Sauce” dated August 2015), which says that you can make it six months ahead. That could mean it keeps that long, but trust me, it won’t last. I’m already wondering what to do when the stash runs out before peppers turn red on the vine next fall.

1 lb red chile peppers (such as jalapeno, Fresno or Holland)

Trim the peppers, removing stems, internal ribs and most of the seeds. Wear rubber gloves and make sure not to touch your eyes or mouth. (Seeds are the hottest part of peppers, so if you want to adjust the heat upward, include more seeds.) Place the peppers, garlic and salt in the bowl of a food processor and buzz to a fine paste, periodically scraping down the sides of the bowl. Transfer to a clean glass jar. Cover with cheesecloth secured by a rubber band. Set aside at room temperature for seven days to ferment. If you ferment longer, the flavor will become more pronounced.

Transfer the chili mixture to a food processor, add vinegar, lime juice, and sugar or honey, and puree until smooth. Pour back into a clean glass jar. Cover with cheesecloth secured by a rubber band. Set aside at room temperature for at least two days and up to five days to continue the fermentation process.

Blend again in a food processor and store in the refrigerator in a clean glass jar, for up to six months.