A cooking challenge organized by Meg of Grow and Resist and Briggs of Oh Briggsy in which we explore a featured cookbook each month.  The selection for May is Nigel Slater’s Tender, A Cook and his Vegetable Patch. 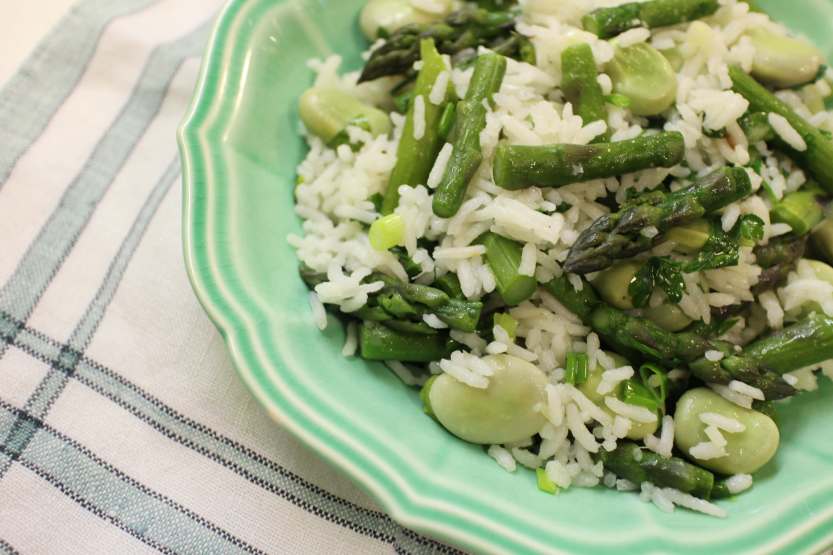 Nigel Slater is right to be poetic about his vegetable patch. He understands that obtaining vegetables from the places where they grow changes your relationship with food. It also changes your relationship with the earth. You’re immediately more aware of seasons and how local microclimate affects what grows and how well. This in turn informs the food that you prepare for yourself, your family, and your friends. And it affects your attitude, likely your health.  I personally think this is a big deal.  Many of us are extraordinarily fortunate to have choices to make about our food, and I am pretty clear on my priorities.

I am devoted to the organic CSA farm we’ve belonged to for years, especially during months when we go to the fields and pick our own vegetables, fruits and flowers. It’s amazing, for example, to become lost in a forest of okra with beautiful creamy hibiscus-like flowers and prickly leaves and seeing how the small part we eat actually grows. I routinely make the rounds of local farms that sell their produce, whether fruit, vegetables, meat or eggs, and come to know the farmers as well as their livestock. Not to mention my penchant for stalking favorite farmers markets and pick-your-own farms, and foraging in woods and fields, or even my “lawn.”

Most of all, however, my kitchen garden is a daily source of sustenance, both physical and inspirational. As Nigel Slater says, the fruits and vegetable of the garden have “signaled an important, life-enhancing new order” in the kitchen so that “the delight in food (extends) far beyond what is on the plate.” That delight truly blossoms in your own garden. I’ve had a kitchen garden for as long as I can remember, certainly growing up in a rural area, and then improvising as I struck out on my own. Sometimes, my garden was a pot of herbs on a fire escape or, later, many pots in a courtyard. Other times it has been an ambitious conversion of a former lawn, and now it’s both, minus the fire escape. I grow enough quantity and variety to feed us sustainably, and since we use organic methods, we are restoring and regenerating our little plot. Bonus.

I was therefore very excited when Nigel published Tender, a chronicle of his garden’s vegetables, and then a second chunky door-stopper of a volume, Ripe, which focuses on fruit. (You could retire your hand-held barbells with these guys.) Before this month’s challenge, I’d read every chapter of Tender, had focused on the accounts of his garden (which I covet) but had only casually dipped into his endless lists. I had barely read the recipes. I’m an avid fan of Nigel’s work. I faithfully read his online column in The Guardian, and keep Appetite, one of his previous books, within short reach. The premise of Appetite revolves around combinations of ingredients and techniques that give the cook self-confidence not to rely on recipes (even though his recipes are very instructive and delicious). It’s a treasure trove of ideas. And so is Tender.

Once I decided to “cook the book” (since that’s the point of this adventure), I first found myself consulting his lists in the sections of each vegetable chapter labeled “Seasoning…” and “And…” as well as the introductory narratives. So many good ideas! That’s how we ended up with sliced beets and cream cheese on a pumpernickel bagel. Really. And a salad of beets and apples sprinkled with walnut oil and nuts. (Page 043)  Same with chard braised in heavy cream with a tad of mustard. (Pages 181-182)

As for the recipes, I opted to cook only what’s in season here, which is a little limiting in mid-May, but includes asparagus, fava beans, leeks, green onions, kale, chard, and herbs such as tarragon and mint, all from my garden or local farms. I also used storage beets from last season’s CSA harvest, which we just can’t seem to finish. Aargh.

Of the recipes, I first made Nigel’s delicious Pilaf of Asparagus, Fava Beans and Mint (Page 032), which includes a minty yogurt sauce that should not be omitted. The rice, rinsed three times before cooking, cooks up light and fluffy. The vaguely Indian spices, including cinnamon, cardamom and cumin, along with bay and thyme, provide an alluring backdrop that surprisingly complements the freshly cooked spring medley. I didn’t peel the fava beans since they were so tender, but you could. This rice dish is derived from a similar recipe in Appetite. He just added veggies for Tender. 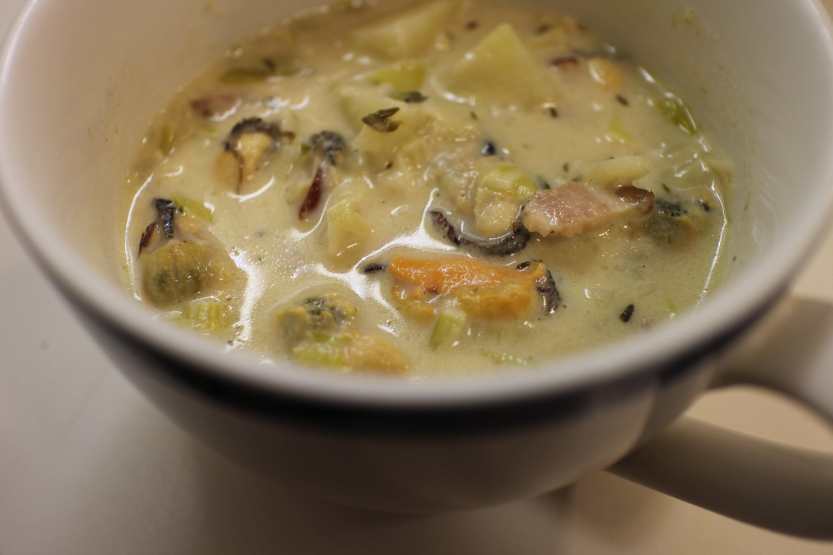 A Chowder of Mussels and Leeks (Page 289) was outstanding. I share Nigel’s notion that onions have an awkward relationship with fish, and so leeks are more successful.  Based on the taste and texture of this chowder, there’s no doubt about it.  I drastically diminished the amount of bacon, butter and heavy cream in Nigel’s recipe, which improved it for my taste and waist. I thought that, throughout the book, there were more bacon, butter and cream ingredients than I would ever want.  Of the 29 chapters featuring individual vegetables, 20 used bacon, 24 used butter, 20 used heavy cream and 26 used cheese. Holy cholesterol. Despite that, I did make a version of Spring Leeks, Fava Beans and Bacon (Page 296) but cut down on the pig.

Kale with Golden Raisins and Onions (Page 279) is a riff on a Mediterranean classic made with chard and also features blood oranges and capers, which I thought were terrific complements. I make kale salad with oranges all the time and the combination was as good hot as cold. I served this by itself, and also with whole-wheat pasta and chickpeas. I’m usually on a roll with Red Russian flat-leaved kale at this time of year because it overwinters in my garden under mounds of fall leaves and wakes up to produce big bushy plants with the most tender greens imaginable. They’re delicate and sweet like lettuce and have none of the leathery texture of mature plants. Sorry, Nigel, I think kale in July is just fine, and it lives in my garden year-round, as does chard.

Appetite contains one of my favorite Nigel Slater recipes, which he entitles “really, juicy spicy meatballs.”  Made with ground pork, bacon (ha!), lemongrass or lime leaves, garlic, hot peppers and cilantro, these little buggers fry up into the most delectable crusty morsels. Therefore, Chicken Broth with Pork and Kale (Page 281) was definitely on my list. No bacon in this one, thankfully, but plenty of hot chiles (from my garden, brought indoors in pots during winter), garlic, green onions (from the farmers’ market). I halved the meatballs in the recipe because we typically eat much less meat than others, and because I wanted some ground pork left over to make the meatballs from Appetite. Both were outstanding.

I know this is a ridiculously long post, but there’s one more observation I want to make about this book: it screams “Editor,” and “Market.”  A few years ago, I put together a book (on design not on cooking) that we shopped to publishers. The creative geniuses behind Mile End Cookbook were the producers and I loved every minute of working with them.  In meeting after meeting with editors and publishers, I got feedback like this: make a chunky book, or one that has an unusual proportion; combine personal stories with information; have “process” or “how to” sections; make lists; organize chronologically, alphabetically or seasonally but make inserts that break things up; use callouts; make it graphically interesting (more important for our book than this, but something I care about); and so on.  In Tender, there are also telltale editorial signs like must-have chapters on vegetables Nigel doesn’t grow successfully or at all. And recipes recycled from other books. What I’m saying is that Tender and Ripe feel contrived: hastily prepared crossovers between memoir and a hodge-podge instruction manual. I’m not disappointed, not at all. However, I am just not convinced that a personal encyclopedia of ideas that just pop into your head or your text or those of your editors, is a great genre. Nonetheless, as Jamie Oliver says on the cover of Appetite, “Nigel Slater is a genius.” His books have a permanent place on my favored shelves since they’re so chock full of great ideas and indomitable passion for food, gardening and quality of life.