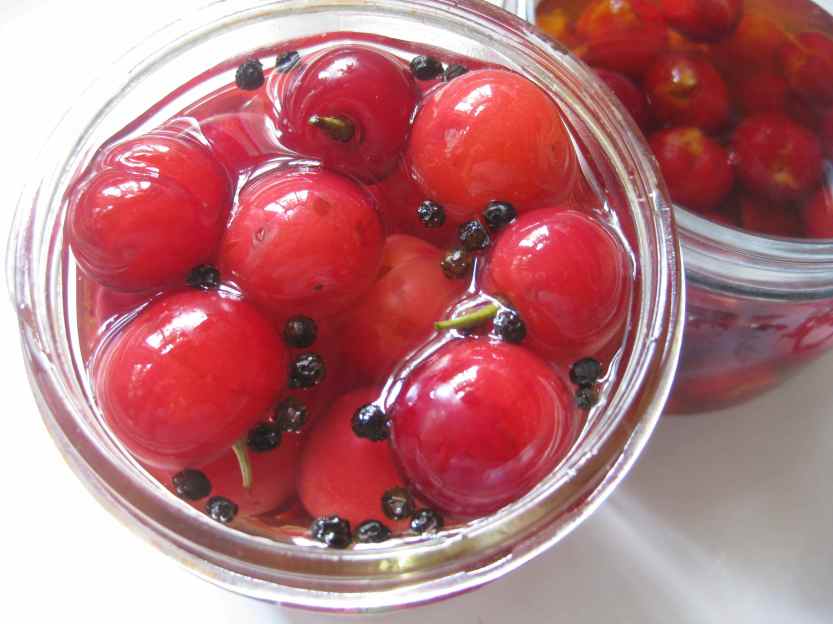 Sour cherries are a fleeting treat. Short in season, these fragile fruits are truly of the moment. I always feel so unprepared, although I save up ways to use them throughout the year. A couple of years ago, I bookmarked a David Lebovitz post for pickled cherries, which I resuscitated to face off against a pickled cherry recipe from the version of Catherine Plagemann’s Fine Preserving that was annotated by M.F.K. Fisher.  As I’ve mentioned before, I thought it would be so amusing to annotate an annotation that I’ve decided to cook my way through the book. (To make this more fun, the volume I purchased was from a well-known bookseller from the west coast who bought it from a second hand bookstore in Boston.) Great stuff.

Back to the cherries. Both of these cherry recipes require weeks of curing. We ate most of our crop at Christmas, paired with duck rillettes and later duck breast, but we still have a few. They were a little crisper earlier of course but are still both delicious. The Plagemann cherries, without the pits, appear plump but are quite soft, and are good eaten as it or chopped as an ingredient in, say, a lentil or whole grain dish. The Lebovitz version puckered a bit but the cherries, with little stems left on for picking them up, were more firm in texture and more definitive in taste. I will make both again, as well as some herb versions with tarragon.

David Lebovitz went straight to a traditional raw pack pickle technique using whole (non-pitted) cherries, a heated solution of white vinegar, water and sugar, and flavorings of bay leaf and black peppercorns, both of which were very nice and alluring. The bay in particular imparts a flavor that’s hard to place; when combined with cherries, one might mistake it for cinnamon!  Plagemann marinated pitted cherries in cider vinegar for a few days before adding sugar in proportion to the fruit and a cinnamon stick. Her version was not heated, which probably accounts for the softer texture.

Trim the stem on each cherry to ½-inch length, prick the cherry with a cake tester or turkey trusser and drop it into a clean jar.

Bring the vinegar, water and sugar to a boil, stirring until the sugar dissolves. Add the peppercorns and bay leaves to the jar with the cherries. Pour the hot liquid on top. When the liquid is cool, cap the jar and let sit for a least a week before using. After a week, refrigerate it.

Place the cherries in a jar or crock with a tight lid. Cover with cider vinegar, secure the top and let stand for three days. Strain and reserve the vinegar.  Measure the cherries. Add to the reserved vinegar one cup of sugar for each cup of fruit, stirring to dissolve the sugar. Return all ingredients to the jar, add the cinnamon stick, and let the mixture stand for three days, shaking or stirring from time to time to make sure that the sugar has dissolved. Let the cherries cure for several weeks before using.