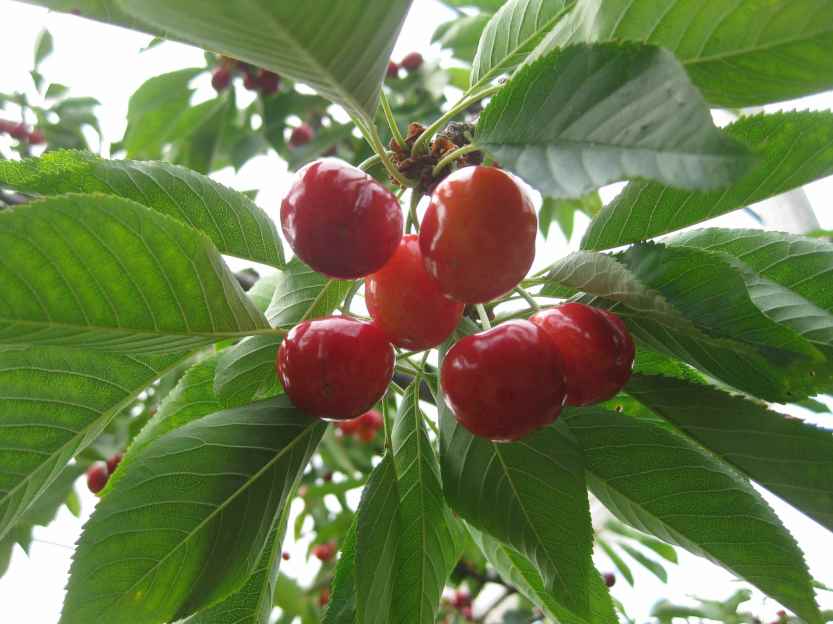 Cherry season is short and sweet but the time for curing most of the jars of preserved cherries is long and slow. The local cherry-picking season is over before even the simplest of preparations can be shared. The tops of last year’s jars of spiced cherries are dated and labeled “ready in 4 months.” Experimentation therefore happens from year to year. No wonder I rarely get to post the numerous cherry concoctions.

So I am going to make up for that over the next couple of weeks, just as the annual cherry-picking fest will happen in a matter of days. Our local cherry orchard offers a bonanza of sweet and sour cherries — Heidelfigen, Rainier, Hartland, Ulster, Chelan, and Montmorency to name just a few. And the season lasts just one weekend!  It’s mind-boggling to think that about 300 trees can be picked clean of thousands upon thousands of pounds of cherries in a matter of days, but I’ve seen it enough seasons to know that if you blink, you miss an entire year’s worth of these precious fruits. Add that to the problem of the curing time.

Last year, I made a dizzying variety of preserved cherries for the pantry: cherry jams, cherry vinegar, pickled cherries, brandied cherries, including multiple versions of each. Fortunately, I saved a little of each type for a spring taste test so that I would know what to make this year.  And I am going to share some of the best ones with you. I also have a few new ideas, and if I can get them in before cherry season’s over in other parts of the country, I’ll give it a shot.

To start off, I am going to repeat the recipe that I developed last year for Sour Cherry Jam, which was nearly hands down one of the most flavorful jams I made all year.  I actually made it twice. The first week, the cherries were slightly under-ripe, which created an intriguingly tart jam. The second week, they were ripe, plump and sweet. The two jams were different in taste and yielded different amounts, and therefore my recipe is proportional.

Reserve about a cup of whole cherries and coarsely chop the rest.  Pour into a large saucepan.

Place about 24 cherry pits between the folds of a dish towel and smash them lightly with a hammer so that the hard shell can be peeled off and the inner “nut’ revealed. Remove kernels, which should measure about 1–1½ tsp.  Peel the lemon, leaving the pith intact. Juice the lemon, reserving the seeds. Place the cherry pit kernels, lemon peel and seeds in a small muslin bag.  Add the lemon juice and the muslin bag to the cherries.

Bring the cherries to a boil and cook for about 5 minutes or until the cherry flesh is completely soft. Depending on the type of cherries used, the cooking time could vary widely.

Remove the muslin bag and pour the cherries and their liquid into a large measuring cup. (I got 2 cups.) Add ¾ of that amount (for me 1½ c) of sugar and return the mixture, including the muslin sack, to the saucepan. Bring to a boil and cooking, stirring to dissolve the sugar, for about 5 minutes. Remove from the heat, pour into the measuring cup, cover with parchment paper (love that trick from Christine Ferber), and, once cooled, let sit for 6 hours or overnight in the refrigerator.

Prepare jars and lids for water bath canning. Place a saucer in the freezer for testing the gel. Bring the cherry mixture to a boil and continue to cook until gelled (mine set in about 7 minutes, and was just shy of 221 degrees in temperature.  Set aside for a few minutes until the foam subsides. Remove the muslin bag and skim the foam. Pour into prepared jars, cap them and process in a water bath canner for 10 minutes after the water boils. Turn off the heat, remove the canner lid and let sit for 5 minutes before removing to a counter to cool undisturbed.

Makes at least two 8-oz jars or four 4-oz jars depending on the ripeness (water content) of the cherries.