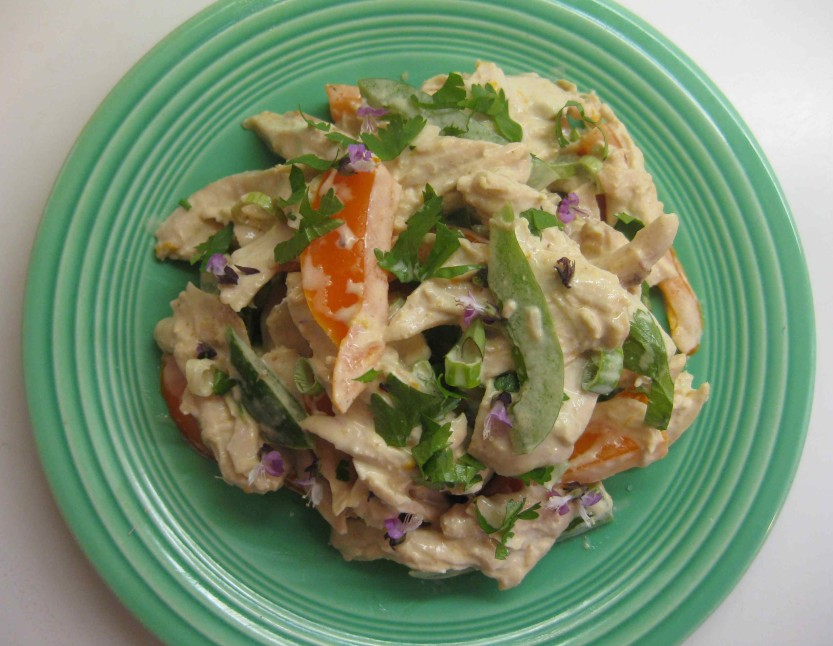 This is not your average mayonnaise. Not even for homemade. Made with rice vinegar, soy sauce and toasted sesame oil, it is delicious as a dip for asparagus, snap and snow peas, radishes and other spring vegetables. I’ve made this many times, especially for large-scale spring gatherings, where I can arrange lightly blanched asparagus bouquet-style in drinking glasses and array lightly blanched snap peas and radishes around a bowlful of the light yellow emulsion. Illustrated here is the home rendition, with a handful of heirloom Indian yellow snow peas that I grow in pots every year and some thin asparagus that I picked at a local farm. 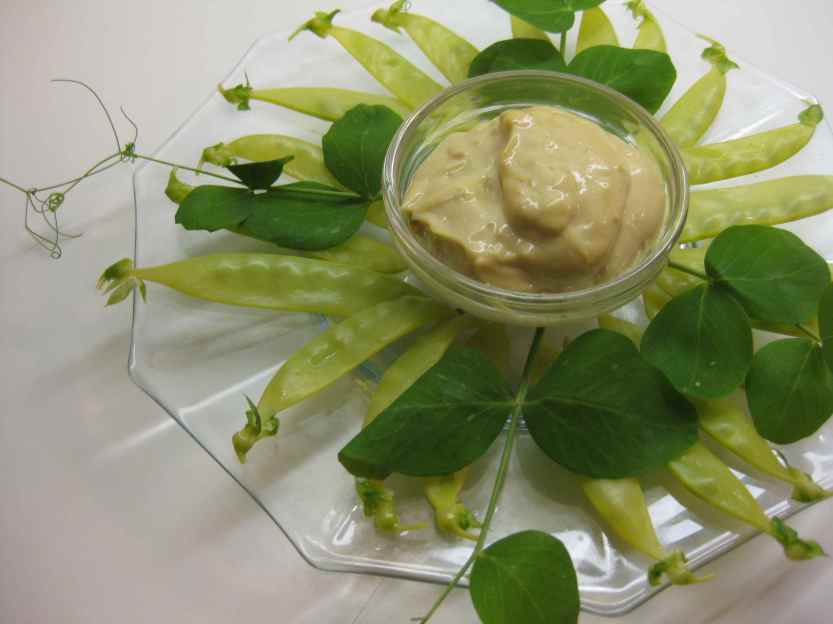 The recipe makes a lot and I’ve never tried to shrink it, since it is voraciously consumed at parties and keeps well, for a couple of weeks at least. In addition to its service as a dip, I would use it as a sauce for chicken satay, or here as a dressing for summer-like salad of poached chicken and colorful bell peppers. It’s also great with poached salmon, an alternative to dill sauce. 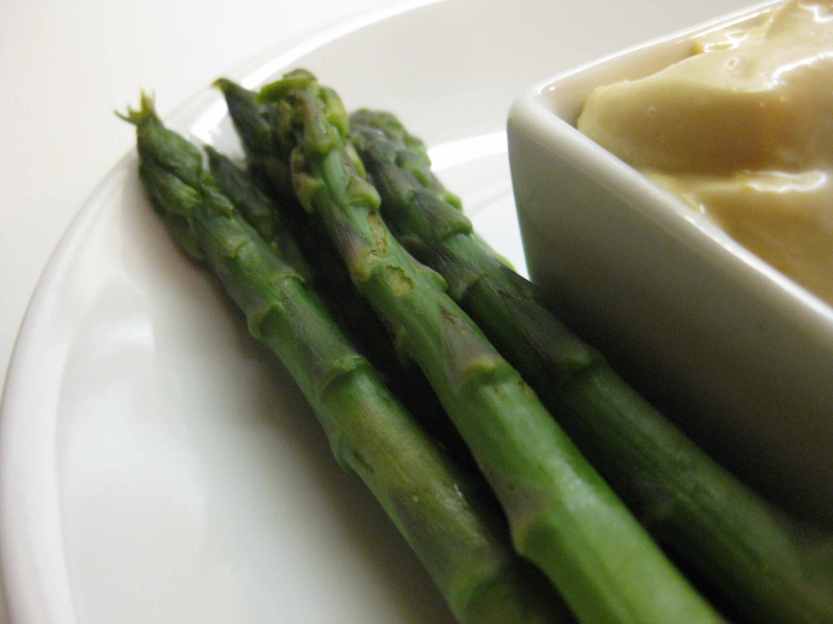 The mayonnaise recipe comes from The Silver Palate Cookbook. The Silver Palate was a so-called “gourmet food shop” that flourished in Manhattan in the late 1970s to early 1980s and set trends for just about everything the owners Julee Russo and Sheila Lukins did.  An American-style bistro, it became the model for take-out shops just as it became a style guide for everything from the use of seasonal ingredients to emphasis on the homemade. It’s not in the least esoteric but introduced new dishes and approaches at the same time that it relies on traditional sources and methods. All that’s left of it today is a (licensed or sold) brand label on fancy foods found in the grocery store (think hot fudge sauce, flavored vinegar) and its best-selling cookbooks, in addition to later publications of the two authors.  I find the original cookbook, which is arranged by topic, to be quite entertaining, informative and useful, although I cringe at the graphic design every time I open the cover (it’s an early example of what I associate with Workman Publishing).

With the motor running, dribble in the sesame oil and then the corn oil in a slow, steady stream.

Turn into a bowl and season with hot chili oil if using. Add the grated orange zest just before serving.

This recipe assumes that you don’t have leftover cooked chicken from another recipe.

Salt or soy sauce to taste

Cilantro leaves (or use Thai basil)

Oven-poach the chicken breasts. Preheat the oven to 350 degrees. Place the chicken breasts in a single layer in an ovenproof glass or ceramic baking dish. Sprinkle on a few teaspoons of soy sauce and add water to a depth of about ¼ inch. Cover tightly with foil and bake for about 25 minutes or until the chicken is cooked through. Remove the foil and let the chicken cool in the juices.

Shred the cooled chicken along the grain into bite-sized pieces into a mixing bowl. Slice the peppers into lengths of approximately the same size as the chicken and add to the bowl, along with thinly sliced scallions (cross-wise or lengthwise). Add mayonnaise and adjust the seasonings to taste with salt or soy sauce and red pepper or chili sauce. Garnish with snipped leaves of cilantro or Thai basil and Thai basil flowers.