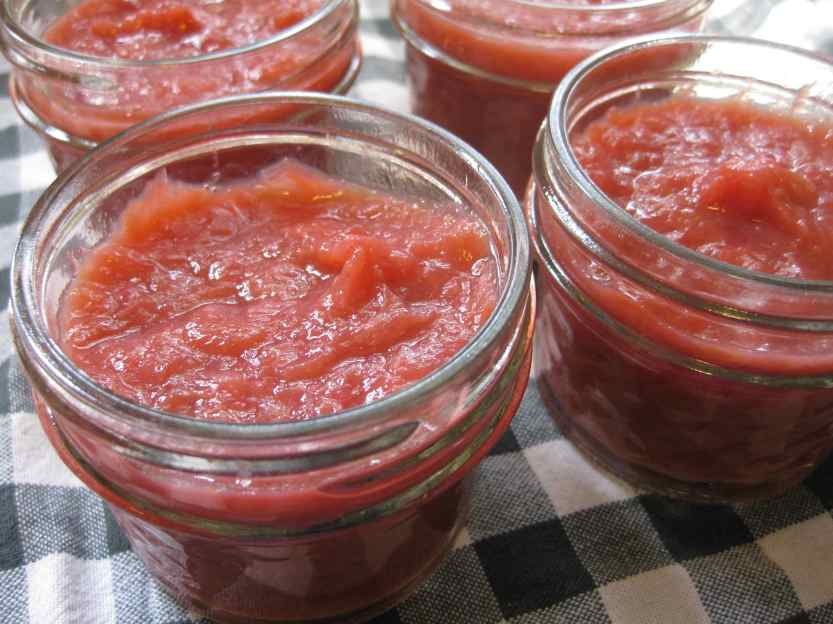 Christine Ferber is a genius and Paul Virant is one smart cookie for using her for inspiration. Every season, I mark preserving techniques, ingredients and whole recipes that I’d like to try. One that’s been on my list is Ferber’s “Rhubarb and Apples with Beer.” I’ve made jams with wine before but never with beer and I was wondering what the beer would do to the rhubarb.

Then along came Paul Virant’s The Preservation Kitchen, and a recipe for “Rhubarb Beer Jam,” which is similar to Ferber’s but uses lemon juice and zest instead of apple. Both lemons and apples are good pectin producers, and I do interchange them.  However, from preserving rhubarb in the past (remember that rhu-barb-ecue sauce that originated as rhubarb ketchup?), I find it reduces to a thick puree anyway.  In this case, using Virant’s recipe and spiking the amount of lemon zest, the marinated rhubarb was like a fruit shandy, a drink that combines beer and lemon. Fully cooked, it has a certain “je ne sais quoi.” Virant uses it as an ingredient in a bar drink that he serves at his restaurant in Chicago.  I can envision it as a condiment to accompany any number of meats or savory dishes.

Virant brings the ingredients to a simmer the night (or days) before he’s ready to make the jam and let’s them cure together in the refrigerator. Ferber macerates the rhubarb and sugar overnight. I did both. Both separate the fruit from the liquid and boil the liquid down before adding in the fruit. (I know rhubarb is a vegetable technically, but it jams up like fruit.) Since I halved Virant’s recipe (except for the lemon), I did not get enough volume of liquid to get the temperature up to 215 degrees as he did (it would have boiled off), but I find the freezer gel test more reliable anyway.

Macerate the rhubarb and sugar for a few hours in a large saucepan. Add the beer, lemon juice and zest and bring to a simmer. Cool and refrigerate overnight.

Prepare canning jars and have the lids available.  Place a saucer in the freezer for testing the gel.

Drain the rhubarb liquid into a wide saucepan, reserving the diced stems. Bring the liquid to a boil over medium-high heat and cook until it nearly reaches the gel point, about 215 degrees on a candy thermometer, or when not very runny when tested on a frozen plate, about 12 minutes. Add the reserved diced rhubarb and bring back to a boil, cooking for approximately 10 minutes more until gelled or reaching 215 degrees.

Process in a water bath canner for 10 minutes after the water returns to a boil. Turn the heat off, remove the canner lid and let the jars sit for 5 minutes before moving them to a counter to cool undisturbed.