A continuing series on weekly meals that use sustainable, organic, local and ethical food during the challenging winter months. For more information, go here to the DDC section of Not Dabbling in Normal’s website: Dark Days Challenge . 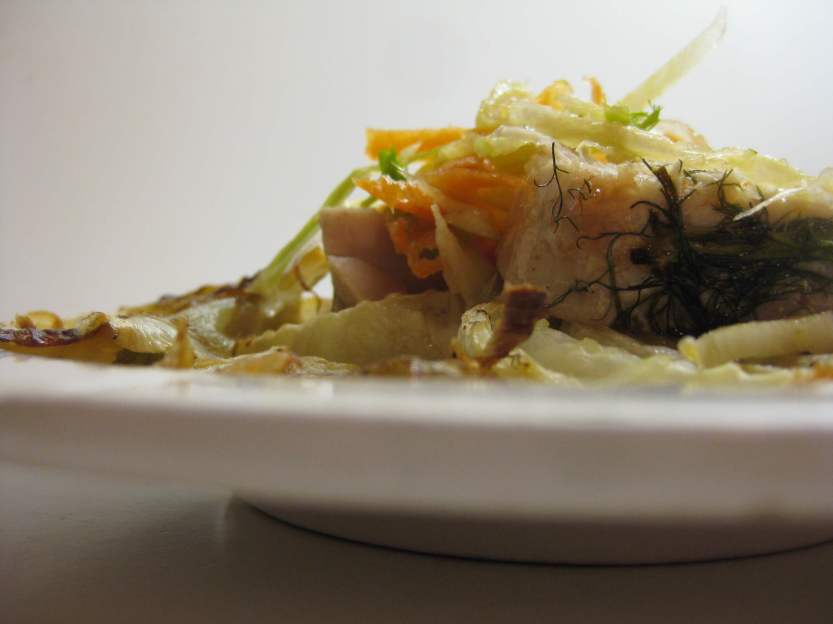 For the 4th week of the Dark Days Challenge, I served locally fished albacore tuna baked in fennel fronds on a bed of oven-roasted slices of fennel bulb. This was topped with a slaw of fennel stems and carrots in a dressing of local apple cider, maple syrup and butternut squash seed oil. As a bonus, I made a tomato-fennel-carrot soup using fennel scraps and an organic Amish Paste tomato and shallot sauce that I canned during last summer’s CSA season. 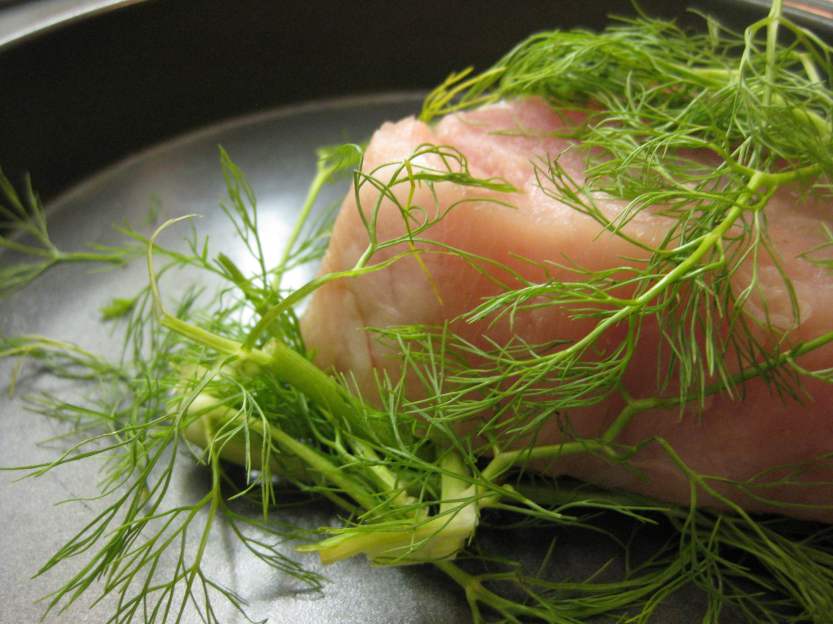 I have been looking into obtaining “local” fish and came across never-frozen albacore tuna in the market, which came from fisherman based at the Jersey Shore. I didn’t realize that a good proportion of fresh albacore tuna – which I always associate with the Pacific Northwest – is fished off the mid-Atlantic coast.  I decided to cook half of what I bought for dinner and preserved the rest in olive oil to use over the next month. Of course, right after I did this, my husband happened to travel to the shore for some other purpose and I convinced him to bring back some local catch, which I’ll discuss in a later post.

I notice that there’s a tendency to parse out menus into meat, starch, vegetable, salad. People even tend to isolate them on their plates. I actually don’t see things that way. I don’t mind a skewed menu, so long as it doesn’t skew too much toward meat. I also like to layer things, which makes for tricky photographic problems. 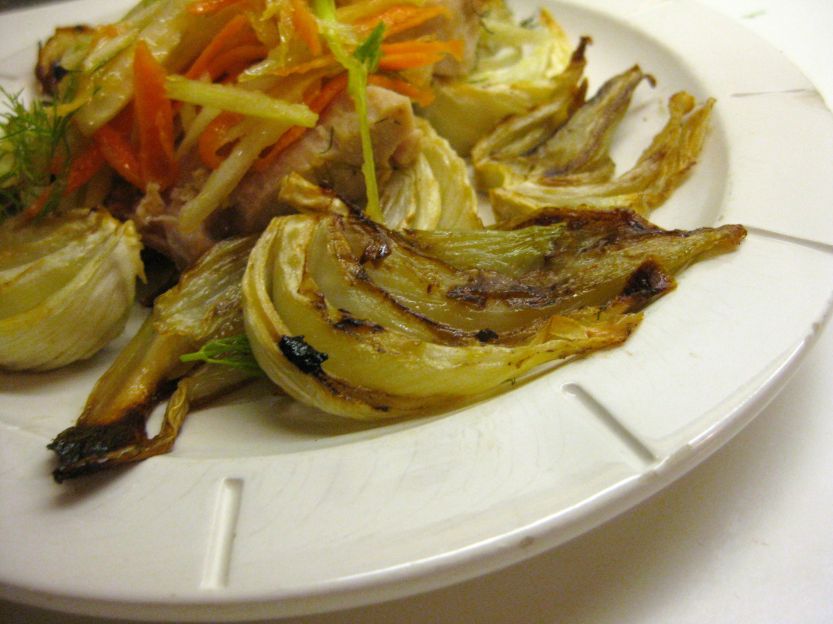 The Dark Days Challenge cleans out the refrigerator and finds fennel. Whoo hoo! I had a slightly shriveled but still really flavorful bulb of organic fennel from our CSA and another, with a few fronds attached, that I picked up at the farmers’ market a few weeks ago. It was from a local farm that doesn’t certify itself as organic but probably uses sustainable principles.  (I would like to do more homework on that topic.)

We like our vegetables and I like to experiment with multiple ways of cooking a single category to make a meal that seems that it has a lot of variety. This is a perfect case in point.  I roasted slices of the bulb as a base for roasted tuna that had been flavored with fennel fronds. I grated the stalks and scraps of the bulbs along with carrots to make a raw slaw to serve on top of the tuna, dressed with local apple cider and maple syrup and my new favorite butternut squash seed oil. The fennel took on different tastes and textures throughout the dish. You’d never have guessed it was a Johnny-one-note meal.

Finally, I gathered all of the scraps of fennel and cooked them with leftover Dark Days turkey stock to make a base for tomato-fennel soup. The tomatoes came from a lovely tomato-shallot sauce that I canned last summer from shallots and heirloom Amish Paste tomatoes from our CSA.  In addition to canning peeled tomatoes and tomato puree, I have been making flavored sauces that are great bases for other dishes or useful on their own. This works well for Dark Days when you might not have access to local organic green peppers, shallots, celery, herbs and other ingredients that are plentiful in season. Obviously, I’m a pantry person.

Preheat the oven to 375 degrees. Slice the fennel blub vertically into ¼-inch slices. Sprinkle with vegetable oil (I used butternut squash seed oil but olive oil would be more typical) and salt.  Roast, turning once, until tender and brown, about 15-20 minutes.

Preheat the oven to 375 degrees. Sprinkle the tuna with vegetable oil (I used butternut squash seed oil but olive oil would be more typical) and salt. Toss with chopped fennel fronds. Roast until barely cooked through (it will continue to cook as it cools). Let it sit for a few minutes to firm up, then slice for serving. This keeps the fish from overcooking. It can be served lukewarm.

Thinly slice or grate raw fennel stalks and any spare sections of the bulbous base. I used the large-holed side of a box grater, which took the green parts of the stalks and left the fibrous portions to be discarded (or used to make broth). Peel and grate a carrot and combine with the fennel.  Make salad dressing of 2 parts apple cider, 1 part maple syrup and 1 part vegetable oil such as butternut squash. (I used teaspoons of each.)

1 pint home-canned tomato sauce with shallots (or add a leek to the mixture and use good quality canned tomatoes, pureed, and cook the soup longer)

Simmer the fennel pieces in the broth until tender. Puree in a food processor, leaving the mixture slightly chunky, and return to the pan. Add the grated carrot and the tomato sauce.  Simmer for about 20 minutes. Garnish with fennel fronds if you have them and roasted carrots.