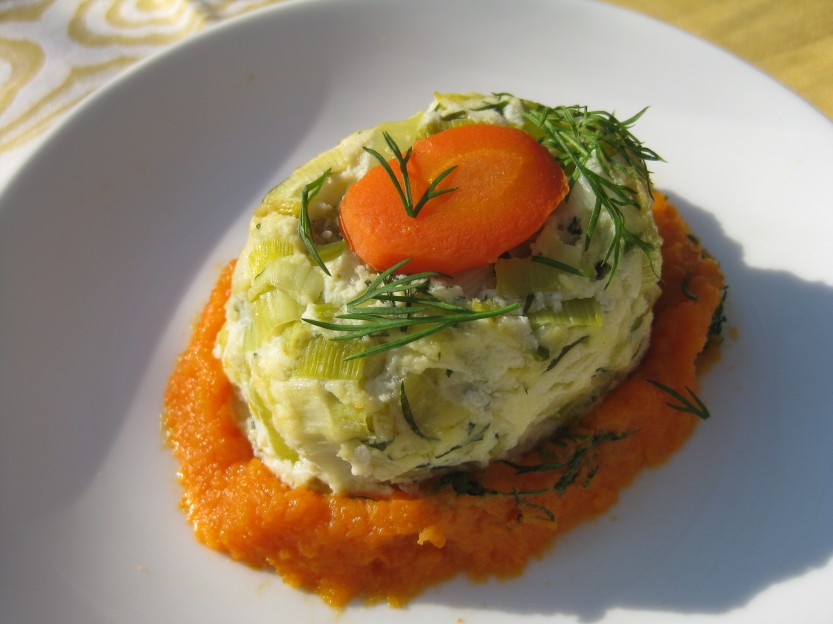 From my winning entry in the February Paper Chef challenge, I was the announcer and judge for the March edition. While I don’t get to compete, I thought I’d play along and make something from the four ingredients: honey, ricotta, dill and eggs. I burst out laughing when dill was chosen, since I had a huge bunch in the fridge, a veritable bush, and it was destined for a dill pesto if I couldn’t figure out what to do with it. 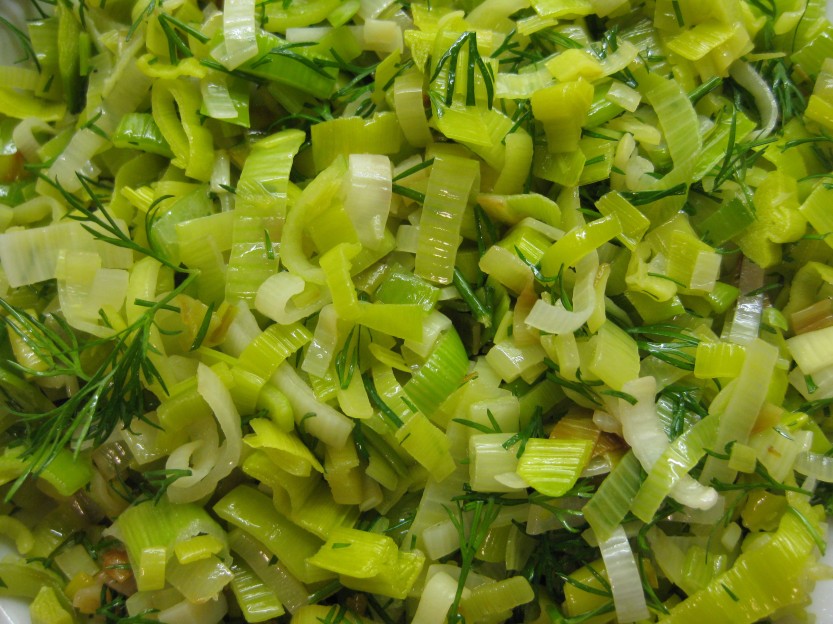 Since the theme is rejuvenation (think spring), I decided to make a ricotta custard with dill and leeks, which I carmelized with honey, and serve it on top of a carrot puree, which also was cooked with a dab of honey. The ingredients had a fresh, clean taste and texture, subtle but tasty. Leaving the heavy roots and robust flavors of winter behind, the leeks and carrots seemed like transition food at this time of year. Of course, it helped that the day was sunny!  This is something I can imagine on the table at Easter time, so I used my little oval timbale molds instead of one big gratin dish. 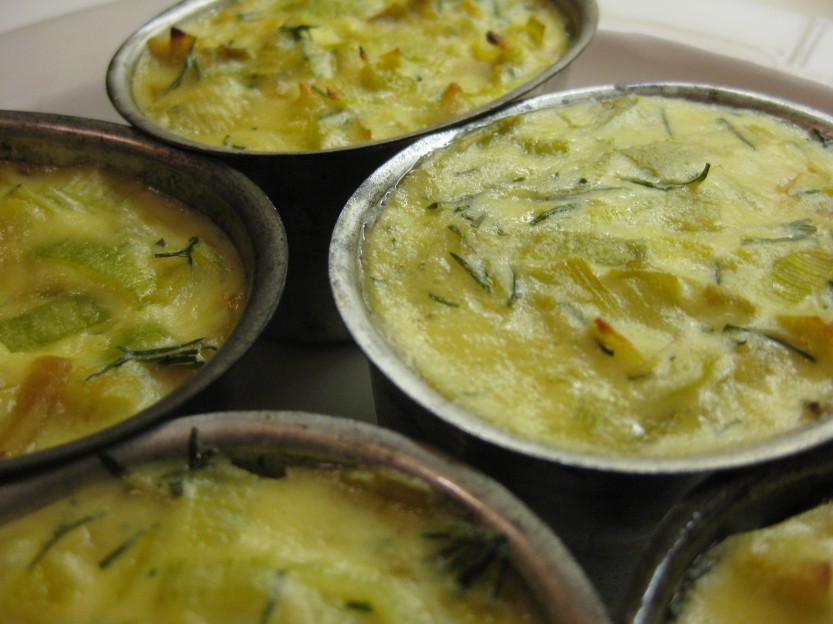 This is adapted from a summer recipe in Deborah Madison’s excellent cookbook, The Savory Way, a beautifully produced volume from an inspirational chef and cookbook author. My copy is well annotated as I’ve almost cooked my way through it!  Her version includes summer squash, spinach and mushrooms, but it’s the ricotta custard base that counts, since you can adapt it to just about any compatible combination of vegetables.

I halved the original recipe to fill five half-cup molds, which I cooked in a bain-marie (pan half filled with water) but I could have stretched it to six. I could also have cooked it in a gratin dish and served it from that instead of unmolding it. I just like to play with my food.

Cook the leeks slowly in butter or oil and when they’re well cooked, add a little honey or sugar and turn up the heat to get them to brown a little. Remove and set aside to cool.

Lightly beat the egg and combine it with the milk and cheese. Add the dill and reserved leeks, and season well with salt and pepper.

Turn into well-oiled timbale molds. Place them in a shallow pan half-filled with boiling water and bake in a preheated 350-degree oven for about 30 minutes. Remove and let cool for about 10 minutes before unmolding.

Alternatively, double the recipe, mix the dill and leeks together, place them at the bottom of an oiled gratin dish and pour the custard on top. Bake at 350 degrees for about 40 minutes, or until the custard is set. Cool for about 10 minutes before serving.

Carrot Puree with Honey and Dill

Cook the carrots in a little water, with the butter and salt, until the carrots are soft and the water has evaporated. Raise the heat, add the honey and cook to coat and slightly carmelize. Puree, adjust the seasonings and serve.