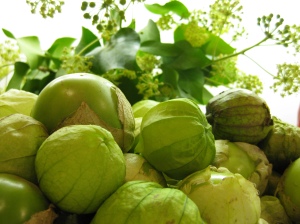 I started experimenting with canning tomato salsa a couple of years ago, trying to find a safe balance of ingredients without turning it into a vinegary pucker. I was just about hitting my stride when this summer the chief ingredient, the tomato, was devastated throughout the Northeast by the fungal disease called late blight.

(The real story should be an expose on big box stores and a commentary on our food supply since the culprit that started this epidemic – the same blight that caused the Irish potato famine in the 19th century – was a supplier of plants to big box stores. Not just one. Several, with their massive distribution… Of course, it was aggravated by our weather, as the disease became wind-borne. Thus even the most astute organic farm was eventually hit, though my personal garden survived. But this rant is not the point of this post… back to the tomatillo.) 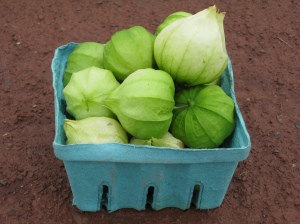 So, with a bumper crop of tomatillos and not a tomato in sight, we opted for green sauce. It turns out that the tomatillo has a pH that makes it a good candidate for canning. I followed the method in Eugenia Bone’s excellent book entitled Well-Preserved.  Canning books and manuals are uninspiring, generally speaking, and even some of the best feel like the 1950s with an uncomfortable new hat. The Farmer’s Almanac is a rip in comparison.

Her method of canning tomatillos is also interesting. It’s similar to my favorite way of canning tomatoes, which allows them to reduce before being poured in a jar. She briefly blanches whole tomatillos, chars the skin off poblano and (watch it!) jalapeno peppers, chops up onion and garlic, processes everything in a food processor and – here’s the best part – simmers the whole mix in the requisite lemon juice with a little salt. That reduces the mix that’s poured into the canning jars and water-bath processed. It also allows you to skim the extra liquid off, so what’s in the jars has a good and not too watery consistency.

The uncanned leftovers have been great, so I have high hopes for the winter. I have a bunch of frozen roasted corn from the office picnic, which promises to make a good soup when combined with tomatillo sauce and chicken or vegetable broth, and maybe chunks of chicken. Lunch tomorrow?