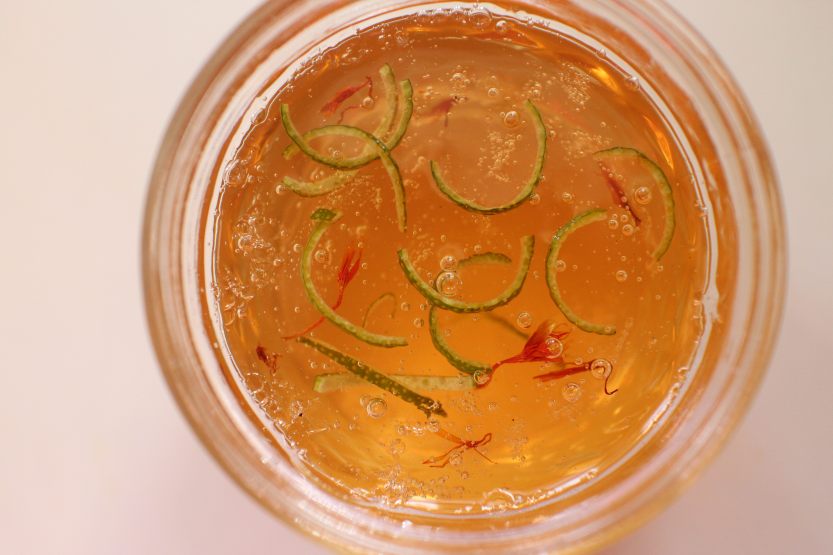 Citrus jellies are especially refreshing in winter. Served with rich cheese, spread on buttered toast, spooned on grilled fish or poultry, or used as a glaze for root vegetables, they add a welcome sparkle during the dark days of the year. I was so impressed with the bittersweet grapefruit and pomegranate jelly that I recently made out of scraps that I had to re-purpose the method.

Most of the small organic limes I had were like little rocks, not particularly juicy. I quartered them and sliced a couple large juicy specimens. After simmering the fruit in water to cover by an inch, I let it sit for a couple hours before transferring the mixture to a jelly bag to drain for several hours. This allows natural pectin to develop so you don’t have to use the boxed variety. (I think that I would have gotten a less bitter result if I’d used the juice and box of Pomona’s or a classic type like Ball’s or Sure-Jell. However, I liked the slight bitterness that comes from the albedo and the peel.)

I read of a version of lime jelly with threads of saffron floating in it in the recently published American version of Kylee Newton’s fine book, the modern preserver. Kylee is a New Zealander living in London, where she inspires (and runs) a preserving business called Newton & Potts that sells its wares at farmers markets, pantries, cafes and pubs. She’s a pantry person like me, and an advocate of “waste not, want not” cooking. Frankly, I did not see that in her lime jelly, but no matter. It’s a good idea. Since she decided to use only the juice from the limes fortified with powdered pectin, all I took from her recipe was the use of saffron. And that too is a good idea. 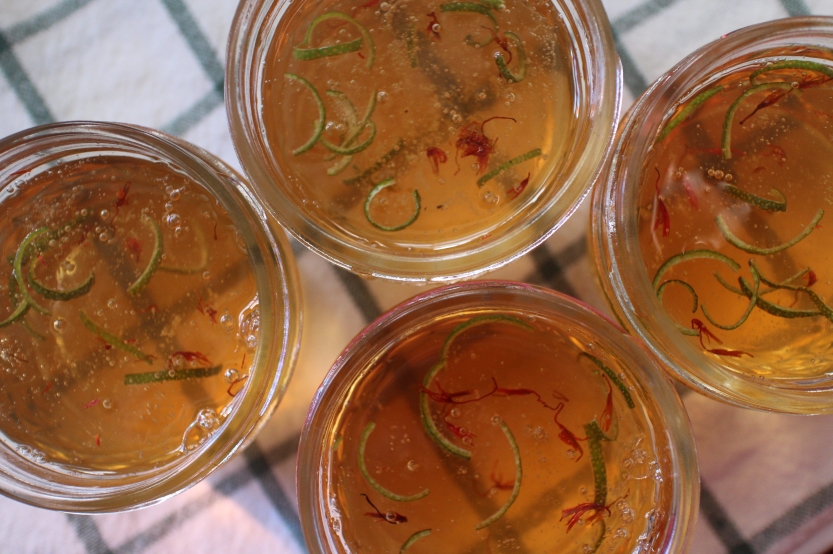 Even though traditional jelly is clear and unadulterated, I decided that it would be pretty to float not only strands of saffron in it but also tiny thin strips of lime peel. The trick to making things float in jelly is to let it sit for a minute to cool slightly. The gel will start to set and keep the additives suspended.

Wash the limes well to remove any dirt or wax. If you want to add a few slivers of lime to the finished jelly, use a vegetable peeler to remove a long strip of zest, being careful to avoid the albedo or pith. If juicy, cut the limes in half and remove the juice, setting it aside. Then cut the shells into quarters and place in a large saucepan. If not juicy, cut into small pieces and place in the pan.

Cover the limes with 1 inch of water and bring to a simmer on the stove. Simmer for about 40 minutes, or until the shells are softened. Turn off the heat and let the mixture sit for an hour or so to cool. The wait also helps develop pectin.

Set up a jelly bag over a bowl. (Mine is a metal ring with three long legs and a muslin sack.) Carefully spoon the lime pieces into the bag and pour the liquid over the top. Let drain for a couple hours.

When ready to make the jelly, place a saucer in the freezer to chill and prepare four- or eight-ounce jars for water bath canning. Measure the lime liquid and any reserved lime juice and add three-quarters of the volume in sugar. (My yield was 4 cups of liquid, and I added 3 cups of sugar).

Place the mixture in a large wide pan and bring to a boil, stirring to dissolve the sugar. Boil, skimming any excess foam, until the mixture gels. You know it’s gelled when a small drop placed on the frozen saucer wrinkles to the touch. (My batch took about 15 minutes.)

Meanwhile, place a pinch of saffron in a tiny bowl with a teaspoon of warm water and pour a little boiling water over the lime peel, if using.

Transfer the jelly to the jars and let sit for a few minutes (but don’t let it cool if you’re processing it in the water bath canner). Using a chopstick, add the saffron threads and lime peel to each jar and gently stir them down into the jelly.

Cover the jars with two-piece lids and process in the water bath canner for 10 minutes after the water boils. Turn off the heat, remove the canner lid, and let sit for 5 minutes before removing the jars to the counter to sit undisturbed until cool.