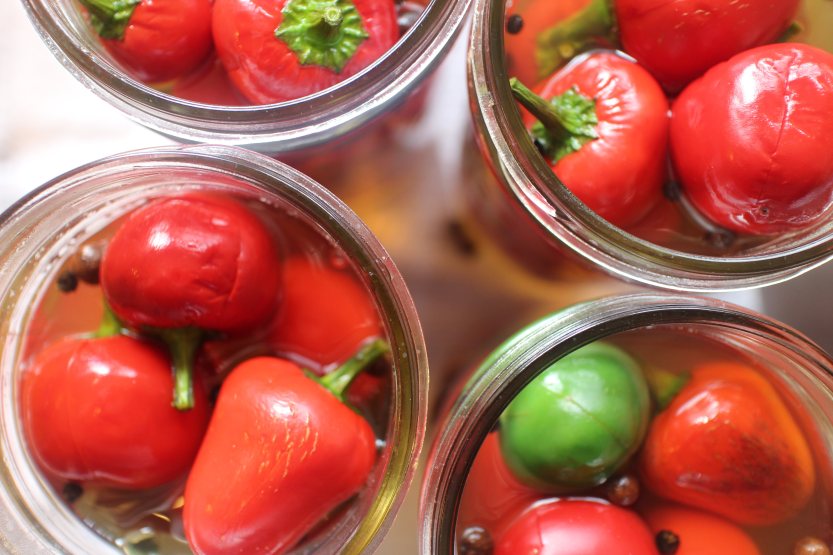 Preserving pecks of peppers takes imagination. The farmers at the market had the same idea I did. Harvest all the peppers you can before the killing frosts arrive. The result is mounds and mounds of peppers of all colors and shapes. What to do with all of them after you’ve consumed as many stuffed peppers and dishes with the French sauté called piperade?

The Aleppo peppers and Chimayos and red Poblanos and Hungarian paprika types from my garden are being dried and pulverized to stock the pantry with aromatic and hot chili powder to spice up dishes all winter. Jalapenos transform into various types of hot sauce, “cherry bombs” into pickles.

With a refrigerator full of jars of brined and fermented vegetables, I decided that I had to can the latest batch of preserved peppers and turned to Linda Ziedrich’s Joy of Pickling for help. The trick to pickling whole peppers is to make a few slits in them so that the pickling liquid penetrates the air pocket. I used 1½-pint jars since so few peppers fit comfortably in pints. To gauge how much liquid I would need, I placed the peppers in the jars and filled them with water before starting the process. I got four 1½ pint jars with the same 2 lbs (1 dry quart) of peppers that Ziedrich used, so I increased the amount of vinegar, water and salt but used the same amount of herbs and spices.

2 c water (or more if needed to cover peppers, but keep 1:1 proportion to vinegar)

To determine how much liquid you will need, place peppers loosely in jars: pint, 1½ pint or quart and fill with water to cover. Drain and measure the water and plan on using about a quarter more liquid for pickling to account for the air space in the peppers.

Create two vertical slits in the peppers or cut two slots around the stem end, and trim the stems to ¼ inch.

Arrange the garlic cloves, allspice berries, peppercorns and bay leaves in the jars withi the peppers.

Bring the water, vinegar and salt to a boil, stirring to dissolve the salt, and pour over the peppers. Push down on the peppers lightly to release air bubbles and top with more liquid as needed, leaving ½-inch headroom. Top each jar with 1 tbsp olive oil. Clean the jar rims well and seal with sterilized two-piece lids.

Process the jars for 10 minutes (pints) or 15 minutes (1½ pints) or 20 minutes (quarts) after the water has come to a boil. Turn off the heat, remove the canner lid and let the jars cool for 5 minutes before removing to a counter to sit undisturbed until cool.

Store in a cool dark place for 3 weeks before eating. Store in the refrigerator after opening the jars.