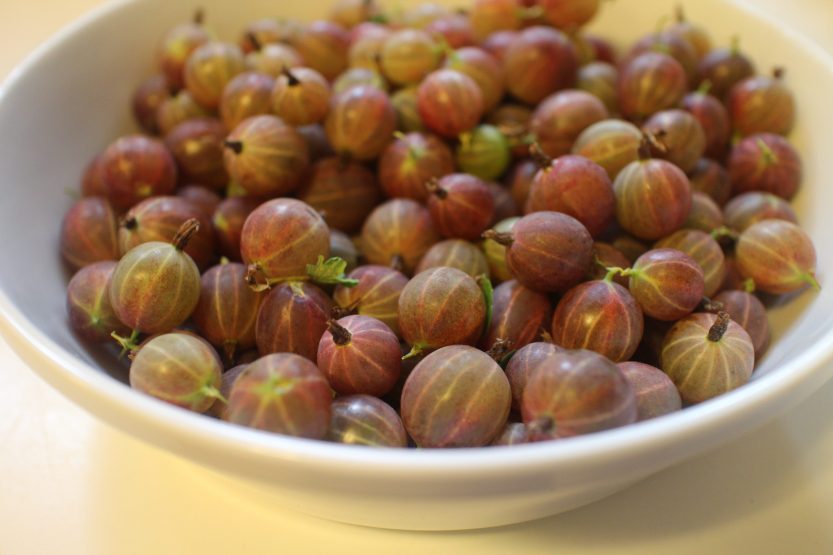 It’s rare to find gooseberries around here. I’m not sure that they’re native. Growing them is actually banned in much of the state of New Jersey since they can carry a fungus called white pine blister rust, which would threaten the Pine Barrens, a vast stretch of land that harbors one of the region’s most important aquifers. We don’t live in one of the forbidden counties but I rarely see them grown locally. The same is true of currants, which are relatives of the gooseberry in the species Ribes. Both are pretty delicate so we don’t even find them imported to specialty shops. I am grateful that a local farm grows them, albeit in small quantities. 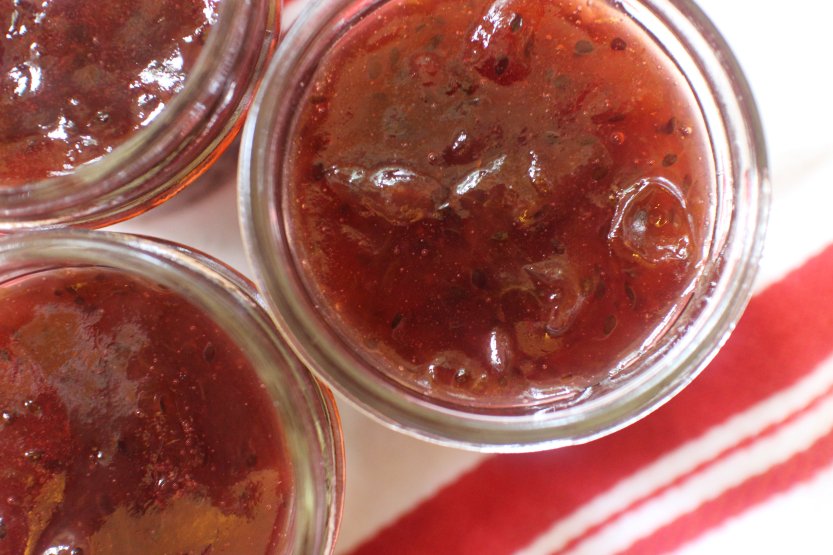 Like currants, uses for gooseberries abound in locales that favor hedgerows. England for example. And continental Europe. The first gooseberry jam that I made this year is robust, flavorful and tart, not for the faint of heart. The second one was inspired by the elderflowers that line the edges of our fields along the Millstone River, another child of the traditional hedgerow. I had just made my yearly batch of elderflower cordial and had a second batch of distilled blossom water, so I used it to make the gooseberry jam, sweetening it a little more than the first batch and smoothing it with an immersion blender. The gooseberry jam with elderflowers was more refined and slightly floral in comparison to the first batch. I was considering floating some blossoms in the mix to distinguish the two, as I’ve seen others do, but they looked like mosquitoes and I thought that was too literal a reference to the glen where the elderberries grow wild. At least that’s how I would remember the day.

Gooseberry Jam and a Version with Elderflowers
1 pt gooseberries, rinsed
1 c water or elderflower water (use slightly more water to create a thinner jam)
Sugar (amount is proportional to the liquid)
Juice of ½ lemon

Prepare jars for water bath canning and place a saucer in the freezer for testing the gel.

Lightly mash the gooseberries and measure the liquid. (I got 1½ c.) Add half the amount of sugar (in my case, ¾ c) and the lemon juice. Bring to a boil and cook until the jam tests for gel (when a drop paced on the frozen saucer is wrinkly to the touch), about 5 minutes.

Ladle into warm jars, clean the rims and top with a two-part lid. Process the jars in the water bath for ten minutes after the water boils. Turn off the heat, remove the canner lid and let the jars sit for five minutes before removing them to a counter to sit, undisturbed, until cool.