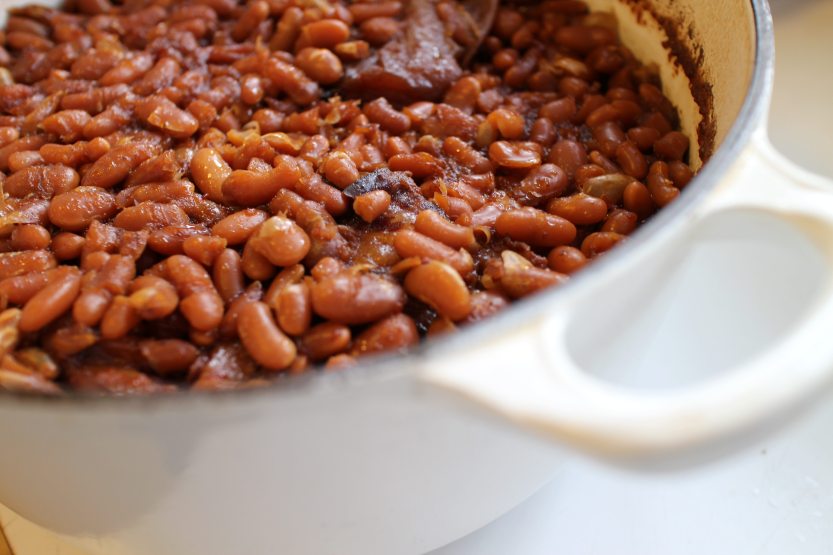 Cooking locally during winter’s dark days makes me think of cuisines from similar climates. With this year’s snow cover, I could imagine that we’re living in northern Vermont, not central New Jersey. New England’s stalwart cooking style seems just right, especially beans slowly baked with onion, salt pork, maple syrup, and molasses. Those are all available locally, which makes me happy in the winter, even if I am being a wimp about the weather.

My bean-crazy husband fantasizes about a cast iron pot of beans simmering on the wood-burning Jotul in his garden shed. I bet he envisions himself in a red hunter plaid flannel shirt, running outside in a blizzard to grab a few more split logs to stoke the fire. I, on the other hand, who actually lived in New England for years, was happy to putter around the house in a hand-knit sweater while the pot of beans simmered away most of the day in the oven of our 1948 Chambers stove. So quaint. As for the time, baked beans are slow-cooked: 250 degrees and 6 hours, after soaking all night (there’s a fast-track method, in the recipe below). You need to make the commitment or go modern and use a slow cooker. I could do either.

All of the above is a plausible and generally accurate story, but there was a subplot. In August, I cook for a big crowd and take requests beforehand. This is an artfully prepared feast of local, seasonal and healthy food, but there’s a contingent that craves hot dogs, because they eat them weekly or just use this occasion as a once-a-year excuse. One of the associated requests is a side of baked beans to go with dogs and slaw.  So far I haven’t honored the request, not from resistance, but only from not having a tried and true recipe that I am sure will fit in the schedule.

I still have in my freezer some of those (thankfully high quality beef) hot dogs from last year, foisted upon me by MK since she knows I’m a waste-not-want-not type. I assume they’re still okay, since I think of hot dogs as the meat equivalent of Twinkies. My big idea for this weekend of bean cooking was to make something to accompany those dogs and then ban them until August, when I’ll be ready to make baked beans for a picnic, upon request of course.

We did eat hot dogs with these porky beans, but my favorite accompaniments were sautéed cabbage and a little green salad, an antidote to the richness and sweetness of the dish that makes New England proud. I’m thankfully ready for the summer version.

Soak the beans in water overnight. Alternatively, bring the beans and 10 cups of water in a large saucepan to a boil over high heat and cook for 2 minutes. Remove the pan from the heat, cover with a lid, and let the beans sit for 1½ hours before proceeding. Drain the beans and discard the water.

Heat the oven to 250 degrees. Stud the onion with the cloves and place in a 4-quart Dutch oven, along with the beans, bacon, maple syrup, molasses, dry mustard, and 3 cups of boiling water. Stir to combine. Cover the pot with the lid and place in the oven. Bake for 3 hours, stirring every hour or so.

Stir in the ketchup and vinegar. Cover with the lid and continue to bake until the liquid has reduced to a thick glaze, about 3 more hours, stirring occasionally.

Add the rum and season with salt and pepper.