It’s hard to beat a simple, scrumptious pie made of just-picked sour cherries. There are only a few sweet dishes I ever crave, and this is one. I look forward to it every June in cherry season. The season, it turns out, is just one day, so I plan to be in town. It starts in the morning with a picking adventure at a local farm that grows exquisite Montmorency sour cherries (and many other amazing varieties) on small trees. The trees are lined up in rows under a gauzy overhead cover that keeps the birds out while diffusing the light and creating an acoustic environment in which snippets of conversation are overheard and meld together. Somebody could make a concert (or parody) of that alone.

Sour cherries are fragile fellows, so they’re rushed home for our annual sour cherry jam. A few are pickled in sweet-sour liquid and seasoned with tarragon or bay leaf. The rest are hoarded for a big old pie. 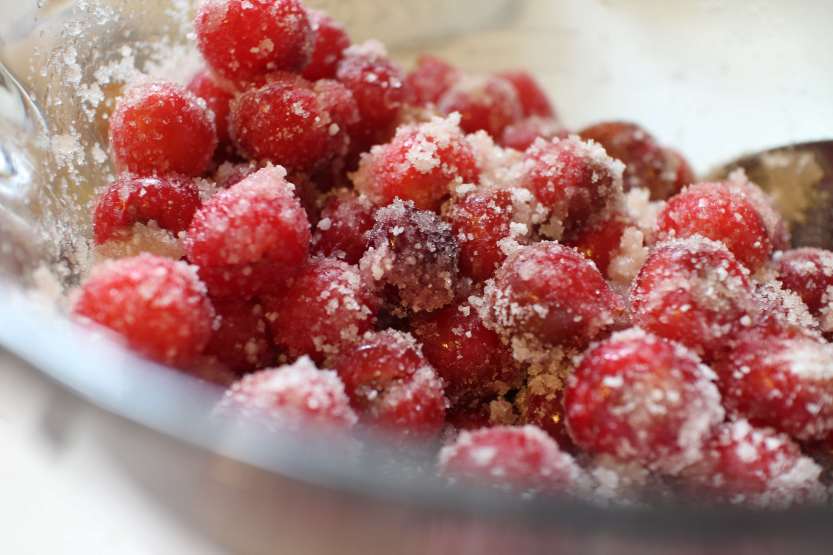 This is a really simple pie to make. The filling includes only cherries, sugar, and a thickener like tapioca. (Some people use cornstarch but that renders the cherries gluey, as if they came from a can.)  A couple years ago, I learned a trick from Melissa Clark of the Dining Section of the New York Times. She, like I, had a textural issue with the tapioca. The little slimy beads were a distraction. She recommended grinding them with sugar before adding them to the cherries. Perfect. 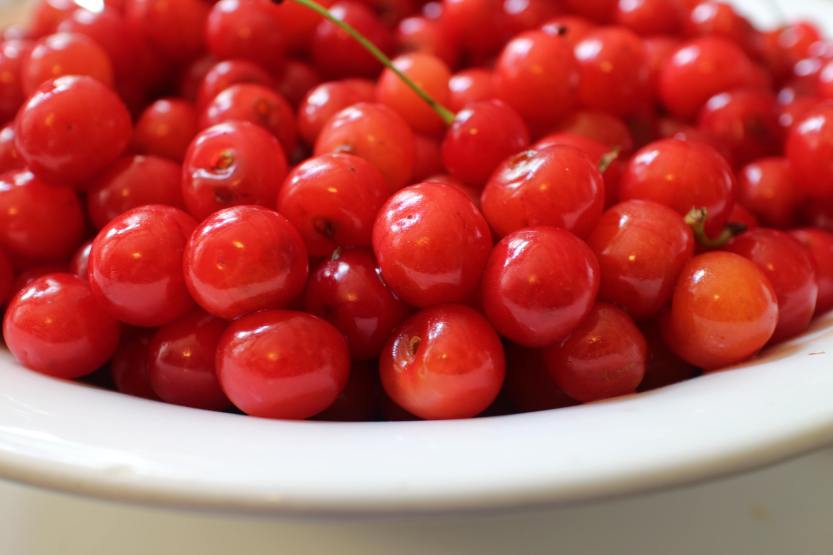 For fruit pies, like this one or blueberry pie, I pre-bake the bottom crust and decorate the top with fresh dough before the second baking. I typically make an all-butter crust but adding a little vegetable shortening (or lard if you want), produces a more tender result. A lattice top crust is traditional, but I like to play with my food so I cut out stars in honor of the holiday. Since they turned into starfish when draped over the cherry orbs – a kind of Salvador Dali melt — I would overlap them structurally the next time. The top crust is brushed with either beaten egg white or cream and sprinkled with coarse sugar, creating a textural and taste contrast to the tangy red cherries.

Sour Cherry Pie with thanks to Melissa Clark, NYT

Make your favorite piecrust, scaling up the recipe from one crust to one a half crust to allow for the pie topping. Divide it into two parts: one-third (for the topping) and two-thirds (for the base) and refrigerate the dough for at least an hour.

Heat the oven to 400 degrees. Roll out two-third of the dough and fit it into a 9-inch pie pan. Cover the bottom and sides with aluminum foil and add pie weights to fill. (I use the same dried beans over and over.)  Bake for about 30 minutes and remove to a rack to cool. Remove the foil and weights after a minute or so. Reduce the oven temperature to 350 degrees.

Prepare the cherry filling. Place the pitted cherries in a large bowl. Whiz the sugar, tapioca and cinnamon in a food processor and stir into the cherries, adding the optional liquor.

Roll out the remaining dough and cut into long ribbons for a lattice-top pie or into shapes using a cookie cutter.

Bake the pie for about 50 minutes until it is bubbly and the upper crust is golden. Cool thoroughly (about 2 hours) before serving as is or topped with whipped cream.