Who wouldn’t like crispy crunchy little “pancakes” that are good for you? Shaped like mini-burgers, they are based on nutritious cooked grains like quinoa or semolina or millet or …. All the ones I’ve made have “special” ingredients that make them sing: tangy feta cheese is at the top of the list, but currants and chopped herbs are right up there.  The couscous cakes are infused with saffron, which gives them a golden color. These cakes are great topped with smoked fish as an appetizer, served with a vegetable stew for supper, pocketed for breakfast, or packed for lunch on a trip.  They’re more substantial than the mini vegetable frittatas that bake in muffin tins so they’re good for the road. And you can make them any size: mine were under 2 inches in diameter so they were basically finger food.

The quinoa version, the way I made it, is gluten-free. The semolina version is obviously wheat-based. Since I’m working on my own recipes, I might not have posted these two – one from Becky Selengut’s Good Fish, and the other from Yotam Ottolenghi’s column in the Guardian – but I had so many requests that I couldn’t resist sharing this discovery. I made Selengut’s quinoa cakes the way the recipe was written. Ottolenghi used barberries, which we don’t have here, so I substituted lemon-soaked currants as he suggested. I also halved the Ottolenghi recipe and converted it to American measurements. Because of the characteristics of semolina couscous, those cakes were drier and denser than the quinoa version. 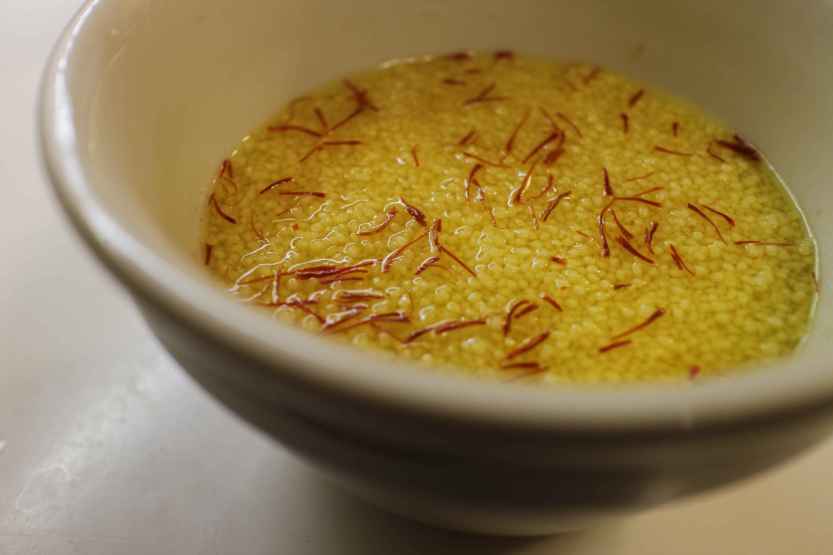 ¼ c finely chopped Italian parsley, or a combination of parsley and chives

Cook the quinoa and set it aside to cool. (To cook quinoa, place the rinsed grains, water and a little salt in a saucepan, bring it to a boil, reduce the heat, cover the pot and let cook for 10-15 minutes.)

Cook the shallots in the olive oil until translucent and set them aside to cool.

Combine the quinoa, shallots, flour, feta and egg and add a little additional salt and the pepper. Form into small cakes (wet your hands if the grains stick) and fry them lightly in the vegetable oil over medium-high heat, until crisp and golden, about 5 minutes, turning them once.

Butter and vegetable oil for frying

Place the saffron in a heatproof bowl and pour the boiling water over it. Let is infuse for a few minutes and stir in the couscous. Cover the bowl and let it stand for about 15-20 minutes.

Meanwhile, soak the currants in lemon juice for 20 minutes.

Fluff up the couscous with a fork and combine with the other ingredients.

Form into small cakes (wet your hands if the grains stick) and fry them lightly in the butter and vegetable oil over medium-high heat, until crisp and golden, about 5 minutes, turning them once.