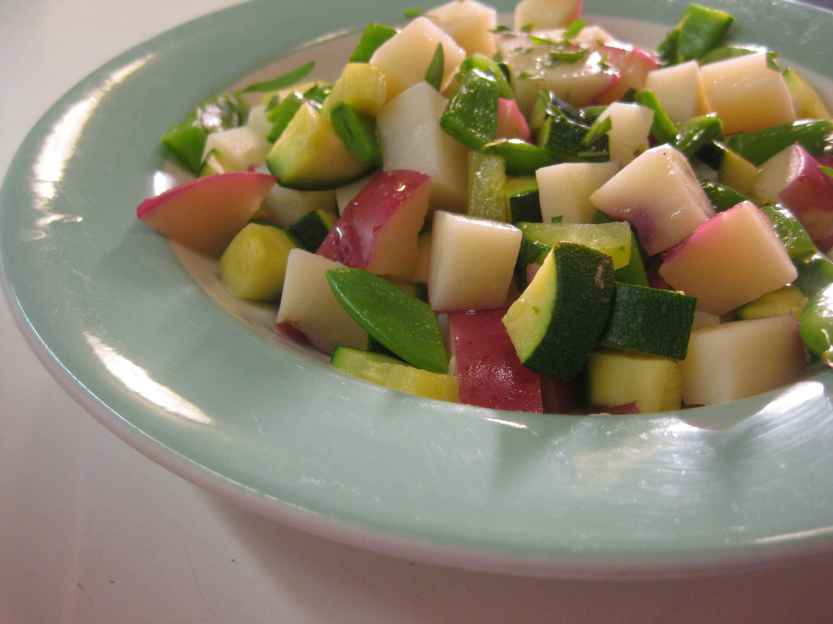 Happy Fourth of July!   Here’s a fine, seasonal potato salad that combines fresh-dug potatoes, fresh baby zucchini, snow peas, and herbs. This is a beautiful and tasty salad that transports well to any summer picnic or barbecue. It can withstand the heat, unlike traditional potato salads made with mayonnaise. And it can incorporate other ingredients like green beans and tomatoes later in the season, or beets and cucumbers now.  I would use only three ingredients plus the herbs unless you’re making a giant chopped salad.

Since I prepare each vegetable separately, I cook them in succession in the same pot, a steamer insert into a deep saucepan of boiling water. This saves on cleanup, and water.  I normally would boil potatoes whole and chill them before making potato salad. However, the new red potatoes were so fresh that I cubed and steamed them. When tender but not mushy, the potatoes were placed in a serving bowl and sprinkled with salt and white wine vinegar while warm (I used my flavorful homemade chive vinegar). By the way those little red potatoes that are sometimes called new potatoes are not necessarily new, but rather small, just like those awful bagged mini carrots that aren’t baby carrots but older carrots cut and tumbled to look new because of their size.

The cubes of zucchini were also steamed, then salted and sprinkled with olive oil. The peas were simply plunged into boiling water.  Finally, the vegetables were tossed together with a little more vinegar and olive oil and sprinkled with fresh herbs.