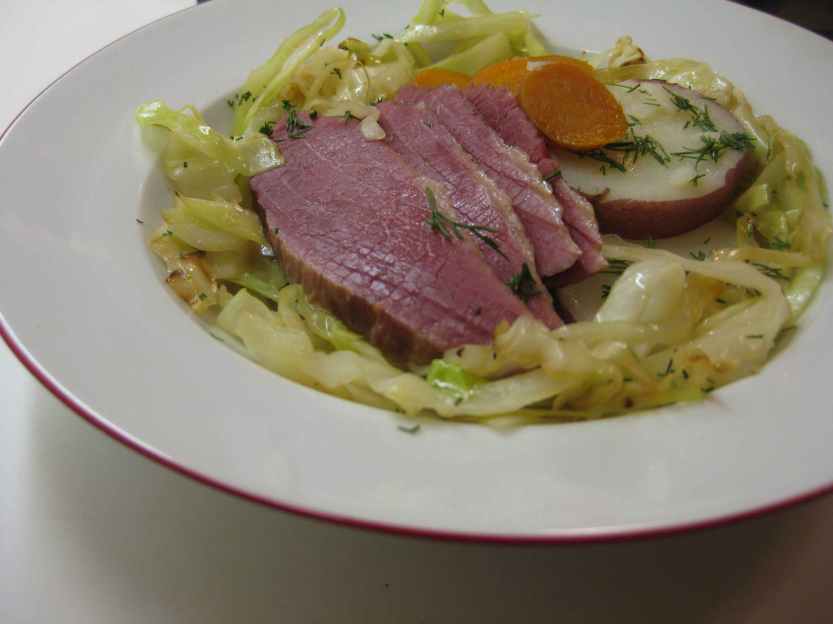 I love invented traditions, like eating corned beef and cabbage on Saint Patrick’s Day, which I understand was conceived by Irish immigrants in America.  Rather than make a New England boiled dinner (like we used to get when in college in Massachusetts) where the beef, cabbage, potato, carrot and onion were all cooked in the same liquid, I served my corned beef and boiled potatoes on a bed of sautéed shredded cabbage.

It is remarkably easy to cure a brisket to make corned beef. I like the fact that I can inspect the quality of the meat before it is cured and being able control the amount of salt and the spice mix. I followed the method from Michael Ruhlman’s Charcuterie, the same source that I used for home-cured bacon. While his recipe calls for a 10% brine (meaning 12 ounces or 1½ cup of Kosher salt per 1 gallon of water), he says that you can go as low as 5%, using 6.4 ounces of salt per gallon of water. I used 7½% or 9 ounces of salt. I recommend weighing rather than measuring the salt since the size of the crystals and thus the salt content varies by brand. The two most prevalent brands here are Diamond Crystal and Morton’s, and I find them quite different. In fact, I would have nearly doubled the amount of salt if I had used measured it versus weighing it.  Ruhlman states that the salt dissipates into the water and recommends using a 5% brine if you intend to roast the corned beef instead of braising it.

Another important point has to do with the use of sodium nitrite, in the form of so-called curing salt or “pink salt.” (It’s dyed pink so no one confuses it with regular salt or sugar.) This preservative prevents the growth of bacteria, especially those that cause botulism. It is also what gives the meat its characteristically pink color. Nitrites have been a source of great health concern, especially in mass-produced bacon. It can turn into a carcinogenic substance when the meat in charred or when there is a lot of it present. Sodium nitrite is a naturally occurring substance in many vegetables, like cabbage for instance, and it wouldn’t bother me when used correctly. Supposedly, in mass-produced cured meats, the addition of ascorbic acid (Vitamin C) counteracts the negative effects of sodium nitrite.  I will have to check out the packaging of good quality bacon the next time I’m in the grocery store.  For my corned beef, I added the pink salt to cooled brine, and later cooked the meat at a very low temperature. Michael Ruhlman says that you can leave it out, but I didn’t. 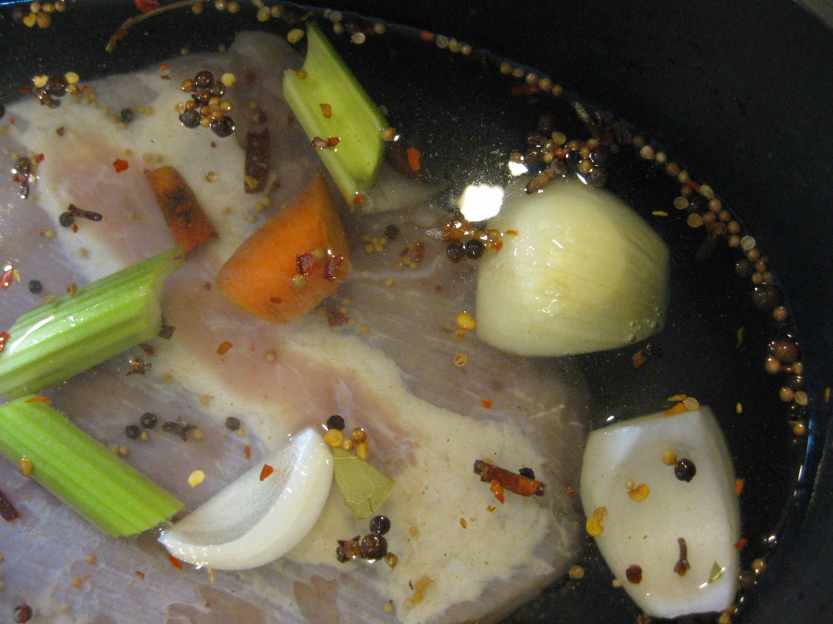 To make corned beef, you first make brine (water and salt) with a little sugar added, warming it to dissolve the crystals. (The salt crystals were once referred to as kernels or “corn,” hence “corned beef.”) Cool the liquid and add the pink salt a bunch of spices. Submerge the beef brisket in the pot, weighting it down to keep it under water, and refrigerate for 5-7 days.  Discard the brine, rinse the meat and cook it submerged in water with new pickling spices, over very low heat for 3 hours. I like to cook mine in a 225-degree oven so that the liquid barely simmers and the meat doesn’t dry out as much.

Up to 5 lbs beef brisket, trimmed of fat (mine was 2¾ lbs, trimmed)

Trim the beef if necessary. Bring the water, salt and sugar to a simmer, stirring to dissolve the crystals. Cool, add the pink salt and spices and refrigerate it. Submerge the beef in the liquid, putting a plate on top to keep it submerged and refrigerate it for 5 days (or a couple days more).

Place the peppercorns, mustard seed and coriander seed in a pan over low heat and cook, until just aromatic. Do not burn or cook so long as to pop the mustard seeds. Remove to a shallow bowl to cool. Crush lightly. Combine with the remaining ingredients and store in an airtight jar.

Rinse the corned beef well and place it in a Dutch oven that can hold it flat. Cover with water. Add I medium onion, quartered, 2 carrots and a stalk of celery, cut in 1½-inch length, and 2 tbsp pickling spices. Cover tightly and place in a cold oven.  Turn the heat to 300 degrees. In about 30 minutes, the liquid should be simmering. Turn the heat to 225 and cooks for another 2½ hours. Remove from the liquid and let rest for 10 minutes, cut into thin slices on the diagonal and against the grain of the meat.