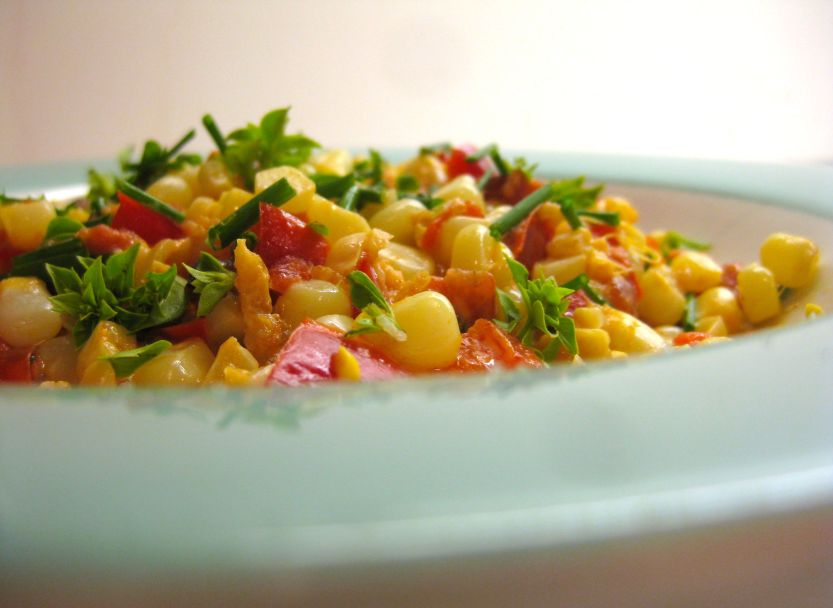 What? Still serving fresh corn on the cob in New Jersey in October? You bet. No killer frost yet. Our local farm stand has a crop of corn in peak condition and another waiting, though we don’t have high hopes for the last one because the nights are getting too cold for the corn to ripen. This corn sauté, similar to a Louisiana “maquechoix” served for Thanksgiving, usually finds its way onto our table late in the summer or early fall when the corn becomes ripe and dense. The farmers who run our local corn stand plant successive crops so we rarely get any corn that’s over-ripe. So if you have access to fresh corn at any time of year, this recipe’s a winner. It was inspired by Bert Greene, whose Greene on Greens cookbook is an oldie but goodie. This year, the corn sauté was a convenient way of dispensing with the last of the cherry tomatoes, stray bits of peppers and basil, but not the corn, which continues to grow. At least for now. We’re so lucky.

4 scallions, reserving the greens (or ½ of a small onion plus chives)

2 plum tomatoes, seeded and chopped, or a handful of cherry tomatoes, halved

Cut the kernels from the corn. Cut most of them close to the core and a few halfway, scraping into a bowl he remaining corn flesh and juice with the back of a knife.

Cook the bacon slowly in a large pan until crisp. Remove the bacon to drain.

Add the scallions or onion and the red pepper pieces to the bacon fat and cook slowly until tender. Add the tomatoes and herbs and cook until well combined, 5 minutes or so. Add the corn and cream and cook for another 5 minutes or until the corn is tender. Season with salt and pepper to taste. Sprinkle with scallion tops or chives and tiny basil leaves.