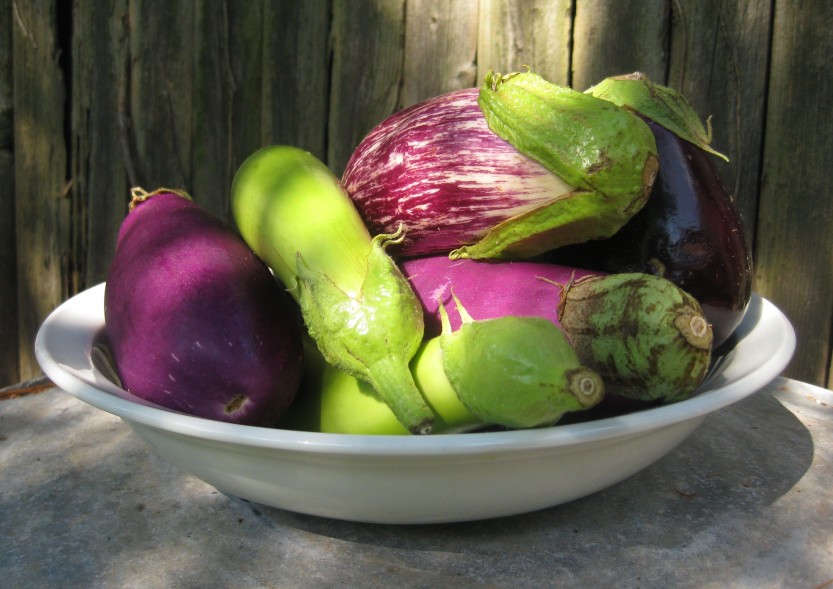 Among the many things I love about our CSA farmers at Honey Brook Organic Farm is the variety of crops they grow and distribute to the members.  In the last few weeks – and for the next few – the eggplant crop is yielding so many picturesque choices that it’s hard not to use them as still life compositions – in the same way that we think of flowers — before we turn them into delicious fare.

There are big pleated dark violet ones, skinny little green ones, smooth bright violet ovals, striated versions in many shapes. So far, I’ve counted over a dozen types. Gorgeous. They’ll be grilled, roasted, steamed and fried, stuffed many ways, preserved in oil, and turned into ratatouille, moussaka, and lasagna, at the least. They’ll cut across Mediterranean, Middle East and Asian cuisines. 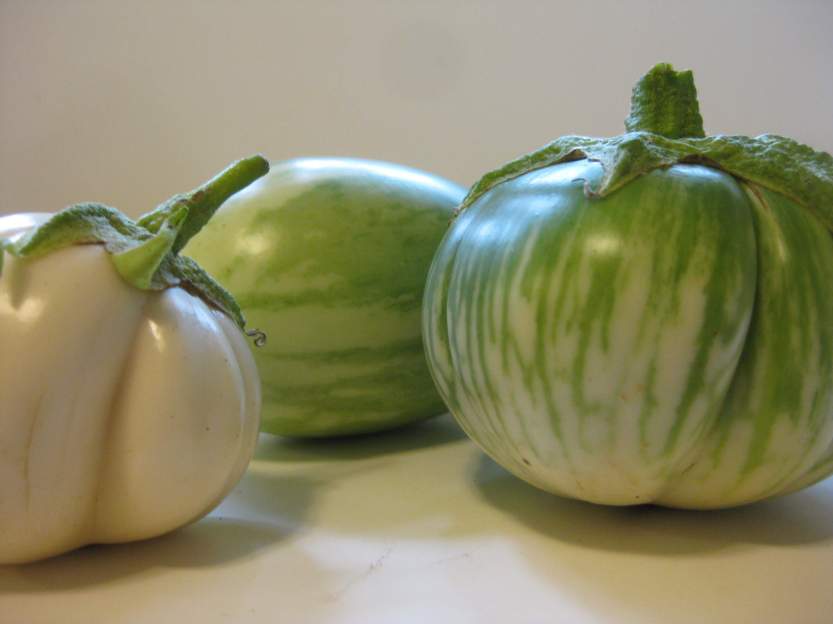 Eggplant figures large in my quest to make appetizers (otherwise known as snack food), which are healthy and fresh. In my husband’s view, this means anything he can put on chips, crackers or bread. I really, really don’t like salt-laden canned salsa at $2.50-5.00 per jar in the grocery store when I can make something better and healthier, with little effort, for less than a dollar if I buy the ingredients at top retail prices, or even less than 25-50 cents in more creative scenarios.

In the Middle East, there is a tradition of meze, small dishes that precede a meal or, like the Spanish tapas, constitute a meal. One of the most prevalent dishes is an eggplant puree called moutabel, sometimes referred to as baba ghanoush, although I understand they’re not exactly the same. I frequently roast a whole eggplant in the oven alongside something else or place it on a grill to use the heat from the dying coals, and let it char and collapse in a heap. I do this in the summer and fall when I am overloaded with eggplant from our CSA and also in winter and spring with slightly damaged eggplant sold for pennies a pound at our local organic market.

You can serve this as is or mix it with pomegranate molasses or top it with olive oil and reduced pomegranate juice to be more authentic. Or with spices like Aleppo pepper or herbs like cilantro. All of which prove the versatility of eggplant.

Moutabel (or a local version of it)

Salt to taste (start with 1 tsp)

Either grill the eggplant over the flame of a gas burner or bake it in the oven at 400 degrees or on a covered outdoor grill after you’ve cooked something else. When baking the eggplant, prick it with a fork in a couple of places so that it doesn’t explode. In all cases, cook the eggplant until it is charred and starting to collapse. Cool the eggplant and remove the flesh from the skin. (You can retain some of the skin in the oven-baked version since it’s tender.)

Place the eggplant and the rest of the ingredients in a food processor and puree, adjusting the seasonings as necessary. Serve at room temperature.