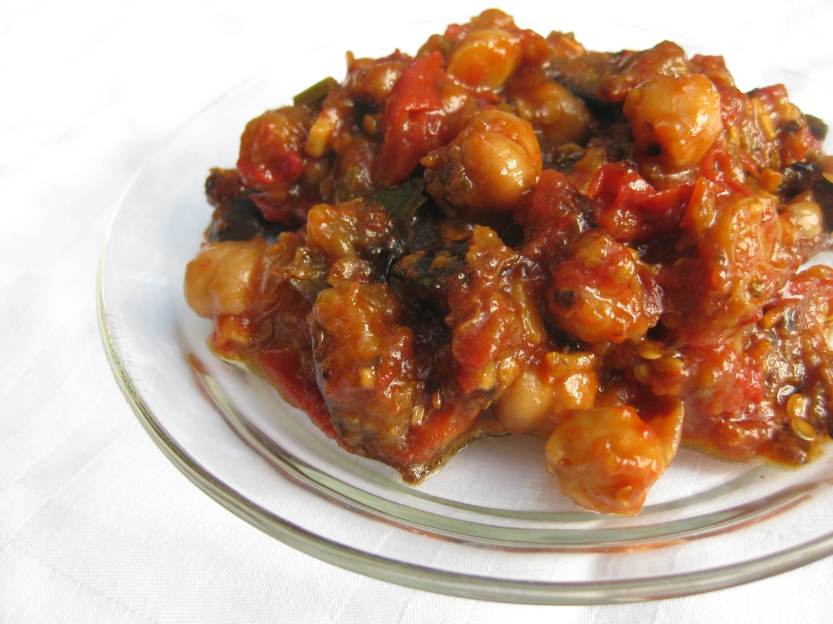 August brings not only tomatoes but also a bumper crop of eggplant, not to mention a hankering for tangy food that offsets the heat of the so-called “dog days” of summer. This characterization of our weather is not a pejorative statement about one of our favorite animals, but rather a reflection of the ascendance of the Dog Star Sirius. Because of its brightness, it was associated since ancient times with the heat of the sun and bringing that hot weather to earth.  I think it’s ironic that two of the vegetables/fruits most associated with this sunny and sultry season are part of the nightshade family, which characteristically grows in the dark. (Thus never put your tomatoes in a sunny window to ripen; they’re better off in a shaded spot.)

This is a recipe that’s been repeated in a couple of versions in Martha Rose Shulman’s “Recipes for Health” column.  The combination is pretty common in Eastern Mediterranean cuisine (such as Lebanese food) and I changed Shulman’s methodology a bit. However, I was glad to reacquaint myself with sweet and sour pomegranate molasses and to further my pledge to clean out my pantry of miscellaneous ingredients before the fall, when I can restock afresh.

Slice the eggplant into ½-inch thick pieces and quarter them. Sprinkle with salt and let drain in a colander for 10 minutes.

Dry the eggplant pieces, brush them lightly with olive oil and bake them in the oven, turning part way through, until lightly browned and tender, about 10-12 minutes. Set aside to cool, covered so that they stay moist.

Meanwhile, sauté the onion and garlic in olive oil to soften, add the tomatoes and bring to a boil. Boil for a minute or two to let the tomatoes release their juice, reduce to a simmer and cook for 10 minutes. Add the eggplant, the chickpeas and the pomegranate molasses. Cook for 20 minutes until thick.  The eggplant will have nearly dissolved. Adjust the seasonings, adding a little freshly ground black pepper. Fold in parsley and mint and let them absorb into the mixture. Serve hot or warm as a side dish or an appetizer.  I served this as a main dish with quinoa.