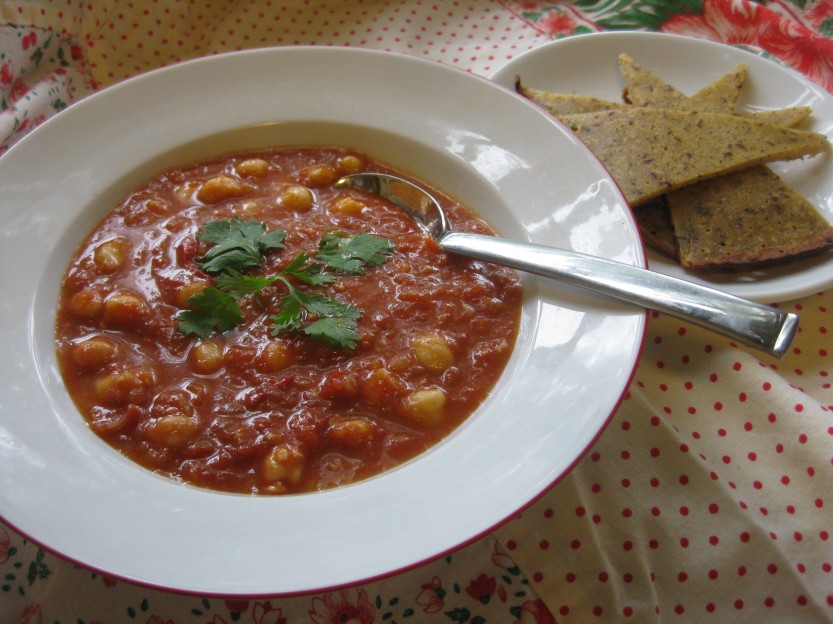 Arabic cooking around the Mediterranean as well as in the Middle East is characterized by combinations of spices, such as the C-lettered group: Cumin, Coriander, Cinnamon and Cardamom. I use them in various combinations to flavor stews and soups, from this tomato version to a really good winter squash soup that I’ll make next season. Cumin and cinnamon find their way into a Moroccan spice mix called “Ras el Hannout,” which I use to flavor oven-roasted chicken or cooked chickpeas. Cumin and coriander are the prime flavors in the Egyptian seed and nut combination called “dukkah,” which I serve with carrot puree thanks to chef Ana Sortun. You can sample it at one of my all-time favorite restaurants, Oleana, in Cambridge, Massachusetts or read about it in her cookbook, Spice, Flavors of the Eastern Mediterranean. 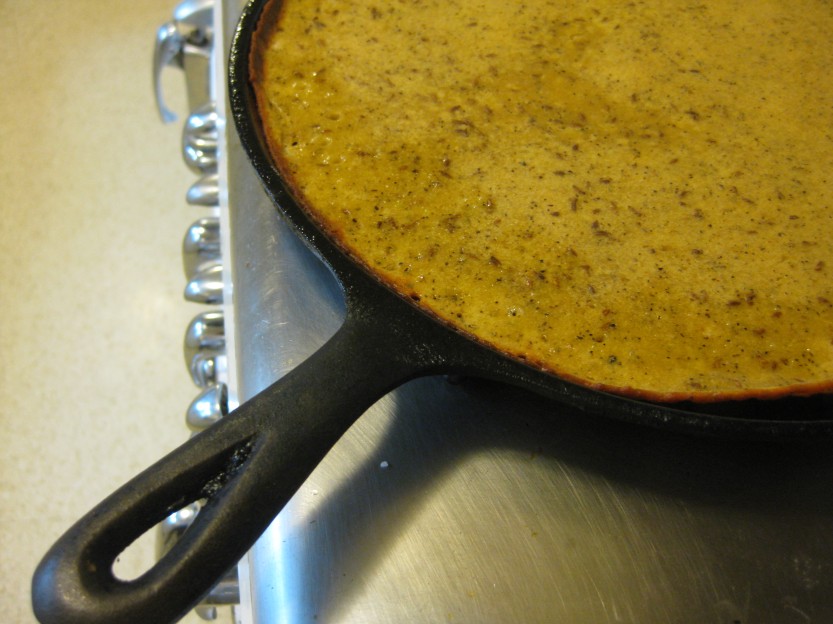 This week, with 20 pounds of tomatoes from our CSA ripening in the dining room, a big batch of just-cooked chickpeas and a Spice Rack challenge featuring cumin, I couldn’t resist making a soup inspired by a recent article by Mark Bittman in the New York Times Magazine.  Onions, ginger and garlic and cooked in a little oil and cumin, coriander and cinnamon are added to make a paste, much like a curry.  Vegetable stock and tomatoes are tossed in to cook slowly, and chickpeas are added at the end. I prefer cooking my own chickpeas rather than using canned ones because of the high salt content, but honestly, good-quality canned chickpeas and beans are acceptable.

Since I was on a roll with the chickpeas, I decided to make socca, crepes made from chickpea flour and seasoned with black pepper and cumin. Hunks of the thick crepes from southern France (they’re hardier than standard French crepes) hot from the oven were terrific with the soup since their hit-you-in-the-face spiciness counterbalanced the sweetness of the soup.  They’re often served on their own as an appetizer.

Saute the onion, garlic and ginger in the oil until softened. Add the cumin, cinnamon and ground coriander and cook, stirring until it forms a paste. Add the tomatoes to the pot and bring the mixture to a boil. Boil the tomatoes for about five minutes to release their juice and add the broth and a little salt.  Cook for about 20 minutes, add the chickpeas and cook for another 20 minutes.  Adjust the seasonings (salt and pepper). Serve with fresh cilantro.

Socca with Cumin and Pepper

Mix all ingredients (except the 1 tbsp olive oil reserved for the pan) and set aside for at least an hour, or even overnight.

Turn the oven to 450 degrees and place a cast iron skillet or griddle in it to heat for about 10 minutes. Swirl the reserved olive oil in the pan to coat and add the batter, evening it out across the surface. Bake for 7-10 minutes or until set.

If you would like the top browner and crisper, run the crepe under a broiler for a few minutes. Serve hot or warm.