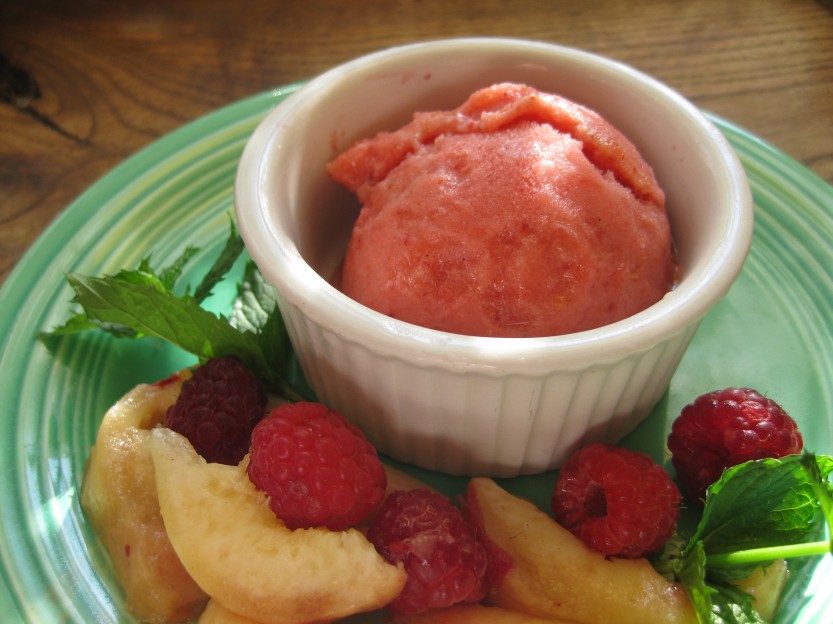 This is like the famous dessert Peach Melba but without the ice cream. “Peach Melba” was invented by Auguste Escoffier in Paris and named after a singer named Nellie Melba. It typically consists of a peach and raspberry sauce served over vanilla ice cream. The first white peaches of the summer and the first red raspberries made a delicious, aromatic sorbet, which was stunningly gorgeous in color from the white peaches tinged with rosy hues and the addition of just a few raspberries.

Peel the peaches by plunging them one at a time into a pot of boiling water for a second or two, then running them under cold water. The skin will slip right off. Cut them into chunks and sprinkle them with lemon juice to prevent discoloration.

Bring the water and sugar to a boil, stirring to dissolve the sugar. Add the vanilla bean and the peaches and poach at a simmer until the peaches are cooked. Do not overcook. Let the peach mixture cool and remove the vanilla bean. Process the cooled peach mixture, raspberries and corn syrup in a food processor until smooth and refrigerate for at least 2 hours until well chilled. Process in an ice cream maker according to the manufacturer’s directions.