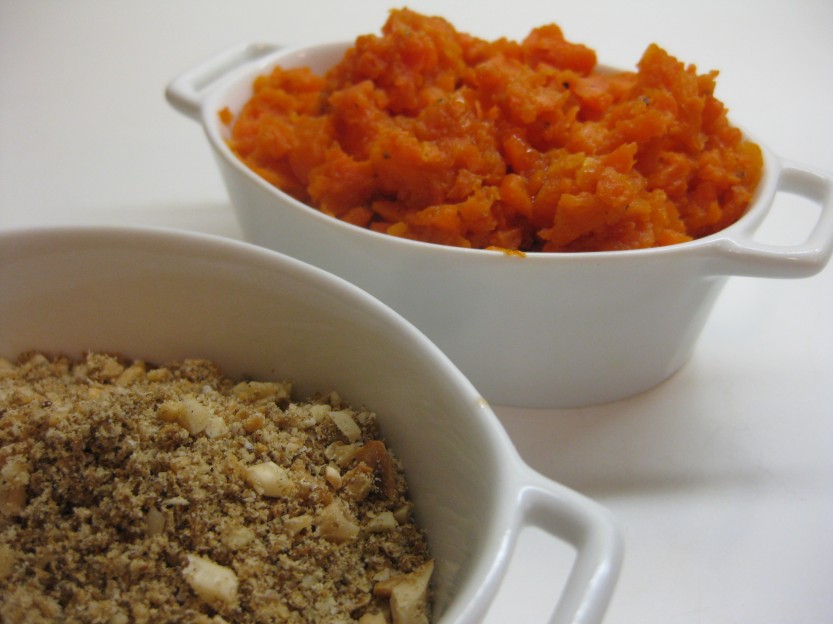 This is a magical combination from Ana Sortun, the chef of Oleana in Cambridge, Massachusetts and author of Spice, Flavors of the Eastern Mediterranean. It’s been high on my list of things to make at home for a while and now I don’t why I was waiting. 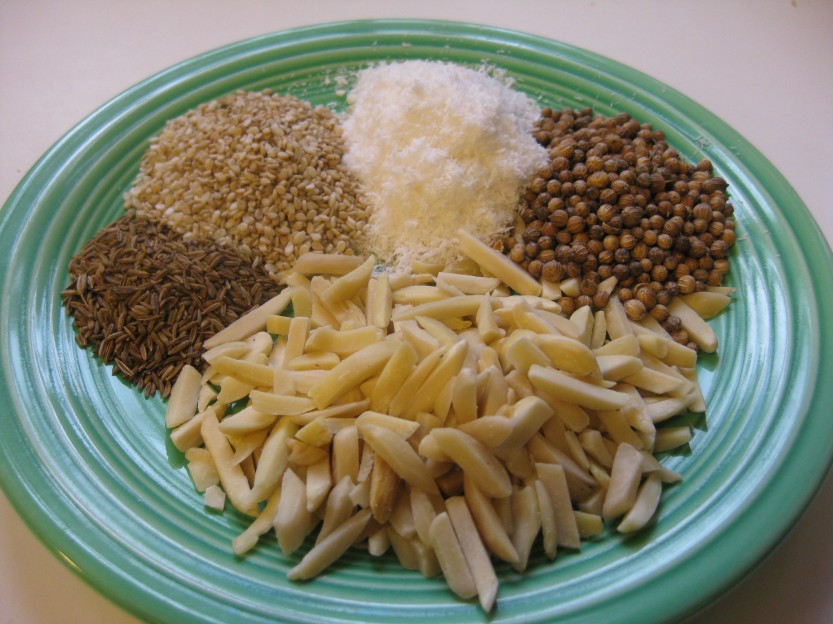 Dukkah is an Egyptian spice mix that, in this version, mixes toasted almonds and toasted cumin, coriander and sesame seeds. Sortun also adds toasted coconut flakes. Other versions add dried mint. While dukkah is a versatile addition to all kinds of food, Sortun serves it as a bread condiment along with carrot puree and olive oil. The carrot puree is a coarse mash with oil, vinegar, harissa, cumin and ginger added, making it smooth and bringing out the sweetness of the carrots, with a counterpoint of spice. 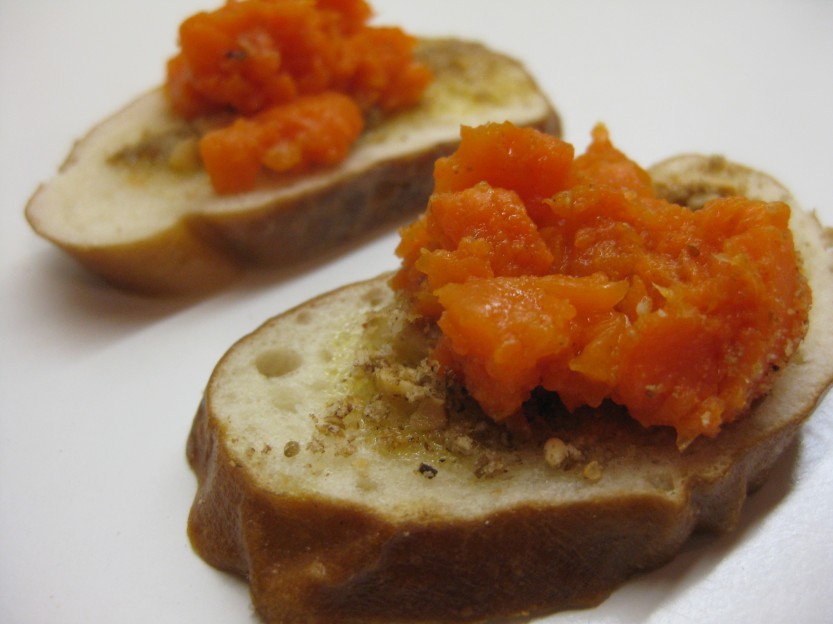 At the restaurant, you dip the bread in olive oil and then in the dukkah (or add the dukkah to the oil) and spoon on the carrot puree. Honestly, the carrot puree is fabulous on its own and I could imagine skipping the bread and oil and simply adding the spice and nut mixture straight into the carrots. Or skipping the carrots and piling the dukkah on bread dipped in olive oil. Other than halving the recipe, I made this straight from the cookbook, though I paraphrased the method and left out the unnecessary salt. To make dukkah, you should have a way of grinding the spices. I use a small former coffee grinder that I reserve for spices. I suppose a mortar and pestle would work too but the sesame seeds should be ground to a paste.

In a sauté pan over medium heat, brown the almonds, stirring (about 4 minutes). Remove to a board to cool and finely chop them.  Place in a small bowl.

Wipe out the sauté pan and add the coriander and cumin seeds, toasting them over medium heat until fragrant (about 2 minutes).  Remove to a spice grinder, let cool and then grind them, adding them to the almond mixture.

Wipe out the pan and add the sesame seeds, toasting them until lightly brown (about 2 minutes). Remove to the spice grinder.

Wipe out the pan and add coconut, toasting it until lightly brown (about 2 minutes). Add to the sesame seeds in the grinder. When cool, process to a paste and add to the spice and nut mixture. Season with salt and pepper.

Salt and pepper to taste (I omitted this)

In a large saucepan cover the carrots with water and bring to a boil over high heat. Lower the heat to simmer the carrots until tender but not mushy (about 20 minutes). Drain the carrots and return them to the pan for 30 seconds to a minute over high heat to dry out. (Don’t let them burn. The point is to eliminate the surface water.) Mash the carrots with a fork, leaving them a little chunky. Sprinkle the carrots with white wine vinegar and add the olive oil and spices. Season with salt and pepper if desired. (This doesn’t need salt.)