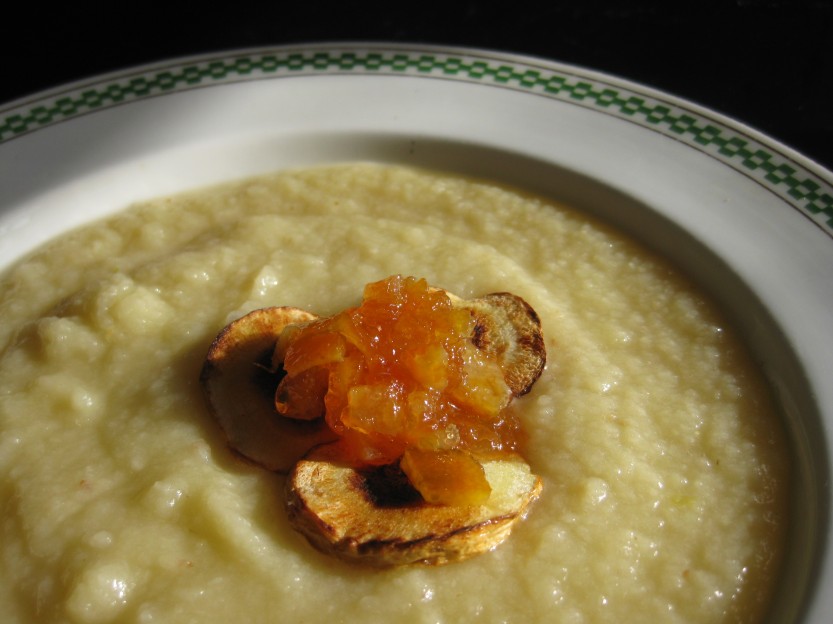 With the Spice Rack Challenge featuring citrus this month, I had to stop and think how I preserve and use citrus peel in my cooking. I was tempted to dip into the jar of preserved lemons that I keep as a sparky standby to make a Moroccan chicken dish or simply to add some tang to roasted cauliflower or broccoli.

Since I have a fridge full of root vegetables and the remains of a crate of citrus that we received for Christmas, I decided to make an orange and parsnip soup, garnished with roasted parsnip chips and marmalade that I just made from beautiful organic red Cara Cara oranges. It’s simple, quick, subtle and delicious. Last winter, I made a root vegetable soup that badly needed some kind of contrasting garnish. Complete serendipity led me to the jar of marmalade sitting in front of me. This turned out to be such a good idea that I’ve repeated it many times since with marmalade and other fruit jams.

When I have really good oranges or lemons without waxed skins and am using them only for juice, I first peel the skin in one long piece, like peeling apples, and hang it over a string, or tack it to the wall. In a matter of days, it curls up into a twisted ribbon. I store the dried peels in an airtight bag and pull them out to add to something liquid, that I’m cooking, like a stew or a Provencal tomato sauce or soup, as I did here. The peels rehydrate and exude their citrus flavor into the liquid. (If your citrus fruit is waxed, you should scrub it lemon under hot water to get rid of some of the wax before peeling, grating or cooking.)

Alternatively, you can take the dried orange ribbons and grind them. Just before I made the soup, I roasted parsnips and carrots in ground dried orange peel, which gave depth. When done, they were sprinkled with fresh zest and a little juice.

Saute the onion in butter until translucent, add the parsnips, orange peel and broth and bring to a simmer. Cook until tender, about 20 minutes. Meanwhile, roast thinly sliced parsnip rounds, sprinkled with a little olive oil and salt, in a 400-degree oven until crisp. Place them on the hot soup, spoon on a little marmalade and serve. Makes 4 servings.