This is one of  the most decadent and satisfying desserts that I know how to make. With my new pear and chestnut jam as a base, I think it is even better than the classic version with ground almonds. The new jam perfectly complements the riff on a traditional tart. 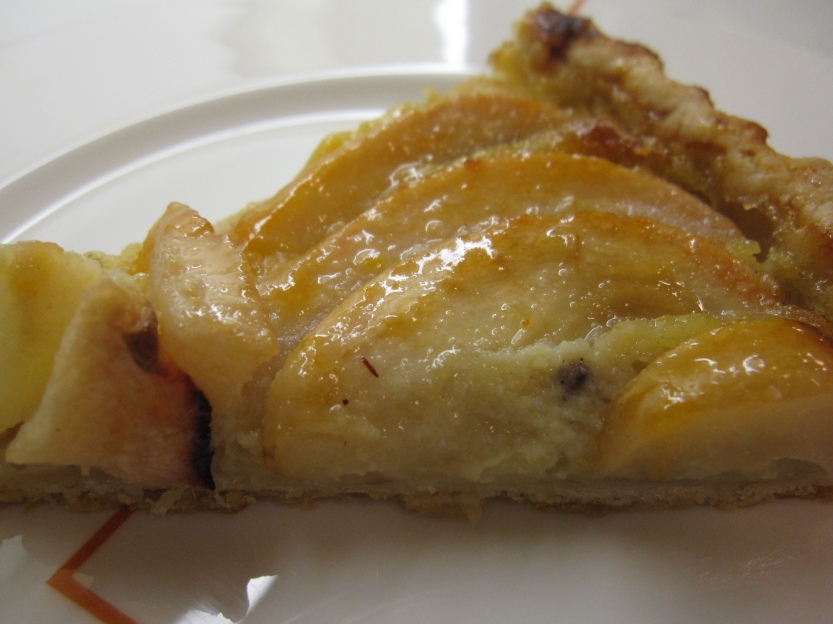 For this month’s Tigress Can Jam, I made a delectable pear and chestnut jam flavored with vanilla and lemon. The aroma and taste were amazing. I have been collecting pears for a couple of weeks as the season winds down for the local Bartletts, though the Asian pears will continue to be available since they are nearly as sturdy as apples. With extra pears and jam on my hands, I decided to make a pear tart that’s based on oh-so-many apple tarts.

Instead of the traditional “frangipane,” a mixture of ground almonds, sugar, butter and egg,  which acts as a base for the fruit, I substituted my newly made jam for the sugar and nuts, assuming that the sparkling flavor would also complement the pears. I was right. This was delicious. I glazed the tart with apricot and nectarine jam from the summer, tinged with a little local white Port.

Pulse the dry ingredients in a food processor to blend. Add the cold butter and pulse to create medium-coarse pieces. With the motor running, quickly add the ice water and stop, Transfer the mixture to a bowl and combine the ingredients quickly with your hands, adding a little more ice water.  Do not over-mix or the crust will be gluey and tough. Gather the dough into a flat patty, wrap it in plastic wrap and chill in the refrigerator for at least an hour.

When ready to bake, roll the dough out to the desired thickness (thin is best) and transfer it to a 9-inch removable-bottom tart pan. Refrigerate until ready to bake.

For this particular tart, the filling acts as a cushion between  fruit and  crust.  A typical mixture, again per Jacques Pepin, would include about ¾ c almonds and 1/2 c sugar ground together and mixed with an egg and 1 tbsp melted butter. Here, I used about 1/3 c of my pear and chestnut jam ( 1 4 0x jar), mixed with 1 tbsp melted butter and 1 egg, lightly beaten. Pour this into the cold tart crust and return to the refrigerator while preparing the pears.

Squeeze the juice of one lemon into a shallow bowl. Peel 4-5 pears, depending on the size. (I used five 3-inch Forelle pears, which were ripe but still firm.) Slice the pears vertically and core them. Cut the pear halves vertically into ¼-inch slices, or a little thinner, dunking them in the lemon juice to prevent browning.

Remove the half-filled tart shell from the refrigerator and place the sliced pears on top. Overlap the pears slightly starting at the outside. If they are uneven (mine were), create a center rosette with pears slices forming the edges and chopped up pears in the center. Sprinkle with 2 tbsp sugar and dot with a teaspoon or two of cold butter.

Bake the tart in a preheated 400-degree oven for about an hour, or until the crust and fruit

are brown and fully cooked. Remove to a rack to cool completely. Remove the tart from the pan as soon as it is cool enough to handle.

Mix 3 tbsp apricot jam with 2 tbsp water and 1 tbsp sugar in a small saucepan. Bring the mixture to a boil, reduce the heat and simmer for 5 minutes. Remove to a bowl to cool, covering with parchment paper to prevent a skin from forming. When ready to apply, add a tsp of kirsch if desired (or in this case a tsp of local port, nothing strong enough to divert from the pears).

When the tart is completely cooled, lightly brush on the glaze, taking care not to disturb the placement of the fruit.

Categories: Pears, Pie, Preserving, Tigress Can JamTags: how to make a pear or apple tart, Pear and chestnut tart