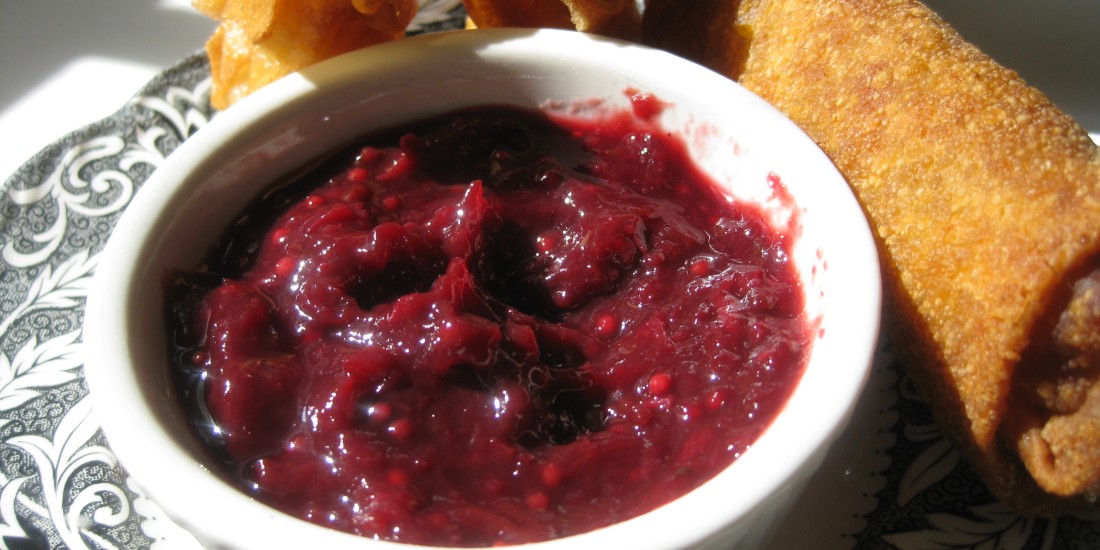 I’m really happy with my first pass at a plum sauce: slightly sweet and sour, with a tang from the ginger and mustard seeds, heat from the jalapeno, and a rich spice flavor from star anise. I made a small trial batch so I canned only one 8-oz jar and had one 4-oz jar for sampling. It was great with vegetarian egg rolls, since it had a good mouth feel in contrast to the crunch of the egg roll wrapper. I can easily imagine it with crispy potatoes, vegetable fritters or with meat, for those who aren’t vegetarian.

Now I’ll be on the lookout for more red plums, with red skin and red flesh, though I admit that I used up a couple of stray pluots in this batch.  Since I had a hard time getting the skin off the plums that I used in my jam to become soft enough, this time I pureed the fruit before cooking it. The origin of the recipe is the Ball Complete Book of Home Preserving but I adapted it pretty considerably. Note that when I double the recipe I’ll be careful not to increase the cinnamon or star anise, since it will pervade whatever amount of sauce is in the pot.

Place all ingredients in a saucepan and bring to a boil.  Lower the heat and simmer until thick, about an hour or so. Ladle into hot jars prepared for water bath canning and process for ten minutes after the water returns to a boil. Remove the lid, turn off the heat and let sit for 5 minutes before removing to cool undisturbed.