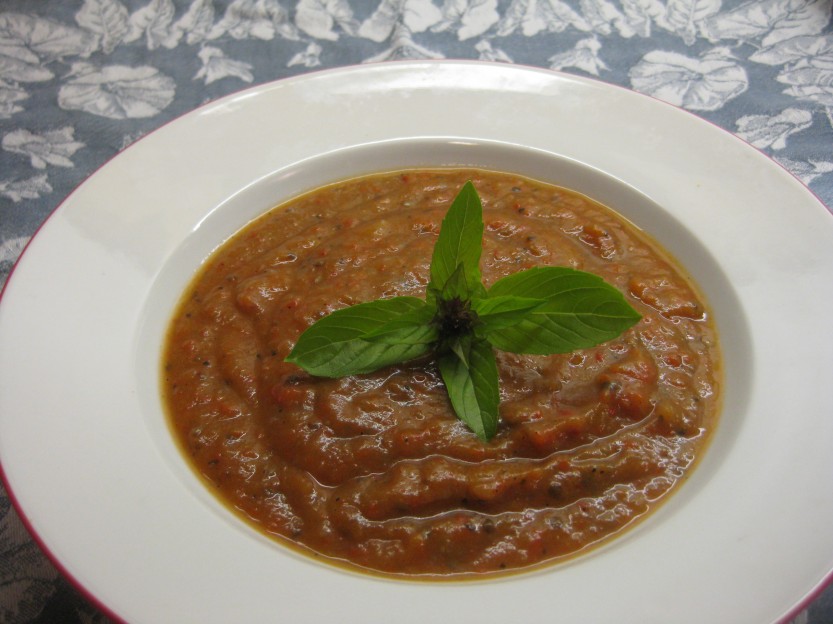 We have had beautiful red hard-necked garlic in our farmers markets this year, and I am contemplating trying once again to grow my own. The last experiment wasn’t successful so I hope that for Fall Fest, we will get some great gardening advice from Margaret Roach, since she chose garlic as this week’s theme. 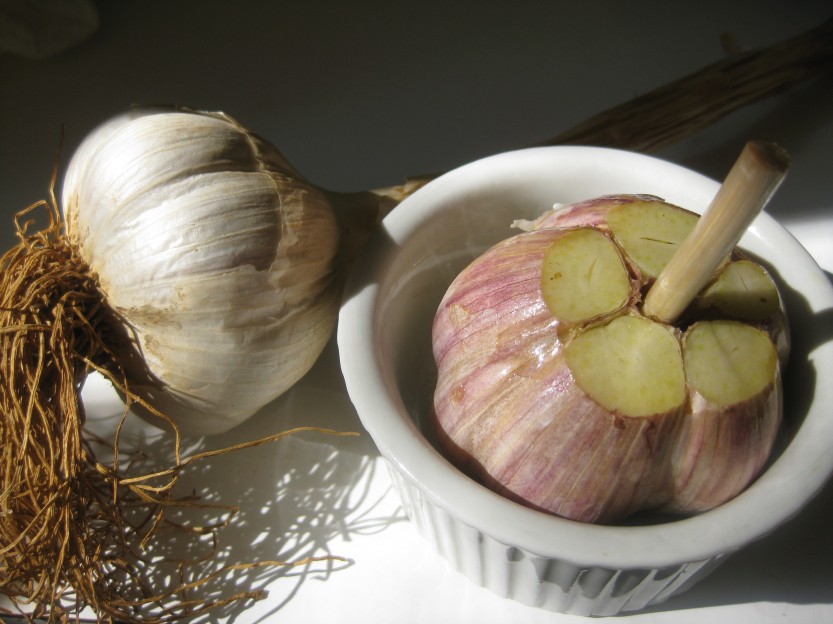 I have an abundance of beautiful eggplant and red peppers so I decided to roast the eggplant and garlic in the oven and the red pepper on top of the stove over a gas flame, giving all three main ingredients a slightly smoky flavor. (Some blacken the eggplant on the stovetop before placing in the oven but I don’t see the point. The better way to do this is to place whole eggplant on the grill after cooking another meal. Let it be, turning a couple of times and the eggplant is well roasted.) When roasting eggplant, be sure to prick it with a knife in a few places or it will explode and make a mess of your oven. 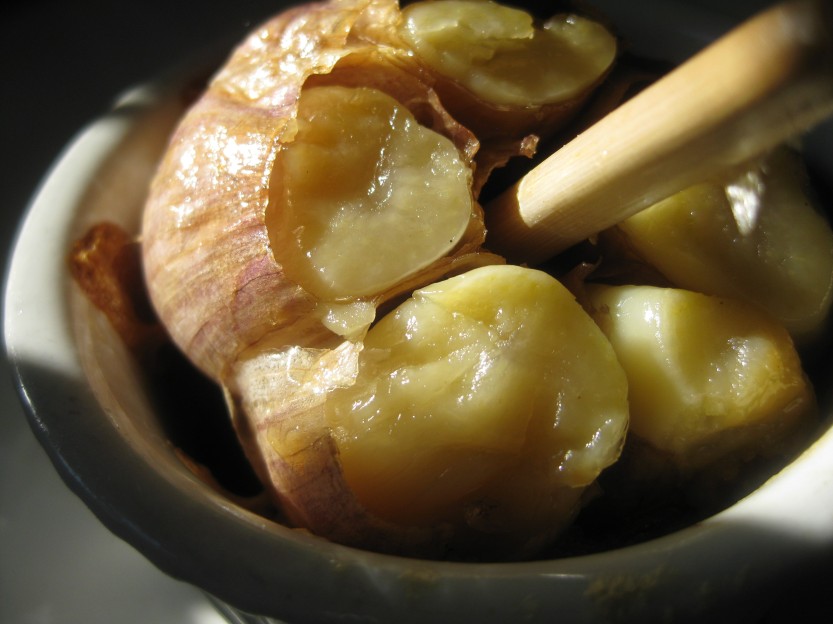 To roast a head of garlic, first trim off the root end so that it sits as flat as possible (but don’t cut into the cloves). Also remove much of the outer skins, to the point of seeing the individual cloves, but leave their skins on as they become wrappers for the meltingly soft garlic that you’ll have left. Cut about 3/8 inch of the top off the entire head of garlic, exposing the ends of the cloves. Stand the garlic head in a small ramekin, sprinkle on a little olive oil, and cover tightly with aluminum foil. (Mine was a little challenge because the stem of the hardneck garlic was so hard that I would have needed tin snips to cut it shorter, which would have been more typical. However, the stem turned out to be a useful handle while I scooped out the cooked garlic pulp.)

Pimenton or another smoked paprika to taste

Garnish: herbs, garlic croutons or a spoonful of an eggplant condiment like agrodolce

Preheat the oven to 375 degrees. Prick the eggplants in a few places with a knife and place them on a baking sheet.  Prepare the garlic by trimming off the root end so it sits flat, removing much of the outer skin, being careful not to break the skin of the cloves, and trimming off about 3/8 inch across the top. Pour a little olive oil on top of the cloves and either stand the garlic in a ramekin and cover tightly with foil or wrap the head in foil, placing it on the baking sheet. Bake the garlic and eggplant for about 40 minutes, check for doneness, and continue roasting until very soft. Set aside to cool.

Meanwhile, roast the red pepper over a gas flame (or under a broiler) until blackened. Place it in a paper bag, close the bag and let the pepper steam.  Remove the blackened skin with a towel. Do not rinse in water.

When the eggplant and garlic are cool, scoop out the flesh and discard the skins. Roughly chop them. De-seed the pepper and chop it roughly.

In a large saucepan, saute the onion in a little olive oil, then add the eggplant and red pepper, stirring to combine well. Add 1 c broth to start. Bring to a boil, reduce heat and simmer for about 30 minutes. Add the roasted garlic and simmer for another 15 minutes. Puree in a food processor (or use an immersion blender). Season with salt and pimenton. Serve garnished with herbs and/or croutons.

Makes about a quart, serving 4.