With a beautiful giant eggplant on hand, I was thinking about how the large slabs could become eggplant lasagna without the noodles, moussaka without the meat, and landed on a custard-topped eggplant that I have made before in a couple of ways. I am not one who’s afraid of the cholesterol in eggs but do temper them with nonfat milk and in this case nonfat or low fat ricotta. I also do not sauté the eggplant in a pool of oil, but rather lightly brush olive oil on the eggplant slices and roast them in the oven at high temperature. This can be done in advance. Making this easy to assemble and bake on a weeknight. 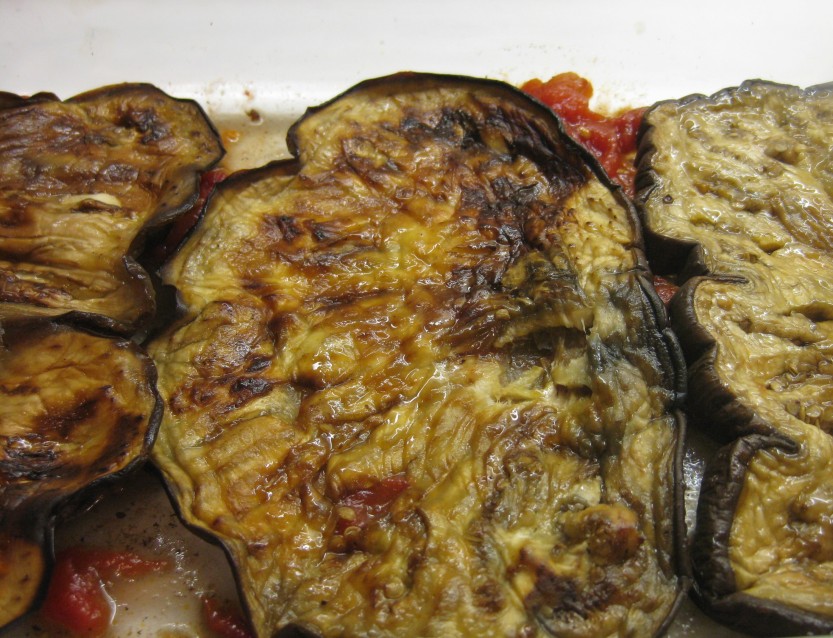 I originally made versions of this recipe from Richard Olney’s Simple French Food and then from an adaptation in Deborah Madison’s Greens Cookbook, both classics in my opinion.  Both recipes use saffron in the custard. Madison adds cheese to make a gratin.

I inserted sautéed mushrooms, roasted tomatoes with a little parsley and thyme between two layers of eggplant and poured the custard mixture  (eggs, milk and cheese and seasonings)  on top. Not so photogenic but delicious with fresh tomatoes and cucumbers on the side. The filling can be varied to suit your taste and the custard can be made without the ricotta if you increase the milk by 1/4 cup.

Custard-topped Eggplant with homage to Olney and Madison

Prepare the eggplant. Preheat the oven to 400 degrees. Slice the eggplant in cross sections about 3/8 to ½ inch thick. Sprinkle the slices lightly with salt and let them stand for 10-15 minutes. Pat them dry, brush lightly with olive oil on both sides and roast in the oven, turning once after the bottom browns, for 10 -15 minutes in total. Remove to a platter to cool.

Prepare the tomatoes and the mushrooms if using. The recipe can be made in advance to this point and set aside in the refrigerator.

When ready to assemble and bake, preheat the oven to 350 degrees. Put a little juice from the tomatoes on the bottom of a baking dish and arrange one layer of eggplant on top. Spread with a thin layer of roasted tomatoes or tomato sauce, mushrooms and herbs. Top with another layer of eggplant.

Lightly beat the eggs, add the ricotta, milk and seasoning to combine well and pour over the eggplant to cover. Bake for about 30 minutes or until the custard is set and slightly browned. Remove and let stand for about 10 minutes before serving.