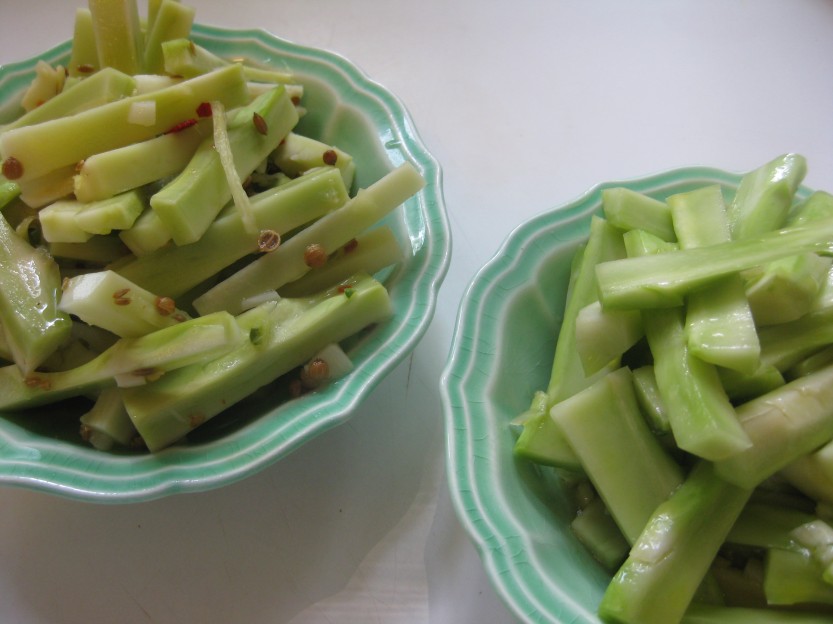 The stems of broccoli are as great as the florets but because of their different consistencies, some people don’t see how to use them together unless the head is cut lengthwise into slim slices so that the tops and bottoms cook at the same rate. I often cook the tops and stems separately and then combine them, as in broccoli salad, or broccoli pesto on pasta. Having come back from our CSA farm last week with 12 heads of broccoli – yikes – but having a bunch of family folk here over the weekend, we had a kind of broccoli-fest. Not overtly a fest but a large batch of soup (separate post) and pickles and a large “salad.”

Pickled broccoli stems have been all over the net for a year, in my world seen mostly in The New York Times. I experimented with two ways of making these fresh pickles, which are ready to eat in a matter of hours.  In both batches, I trimmed the thick outer skin, and cut the stalks into matchsticks of about ¼ inch or less square by 1½ inches long.

I salted one batch (Martha Rose Schulman, NYT) and let it sit for a couple of hours to draw out the excess moisture, then dressed it with a vinaigrette of sherry wine vinegar, olive oil and minced garlic, letting it sit for another half hour or more before serving. It would definitely last longer but not in our house.

For the other batch (Molly O’Neill, NYT), I blanched the broccoli matchsticks in salted boiling water for a minute. Then I combined them with rice vinegar, crushed coriander seed, cumin seed, and pink peppercorns (newly re-discovered) or red pepper flakes, (she used a red chili), minced garlic and salt.

They were different but both great.