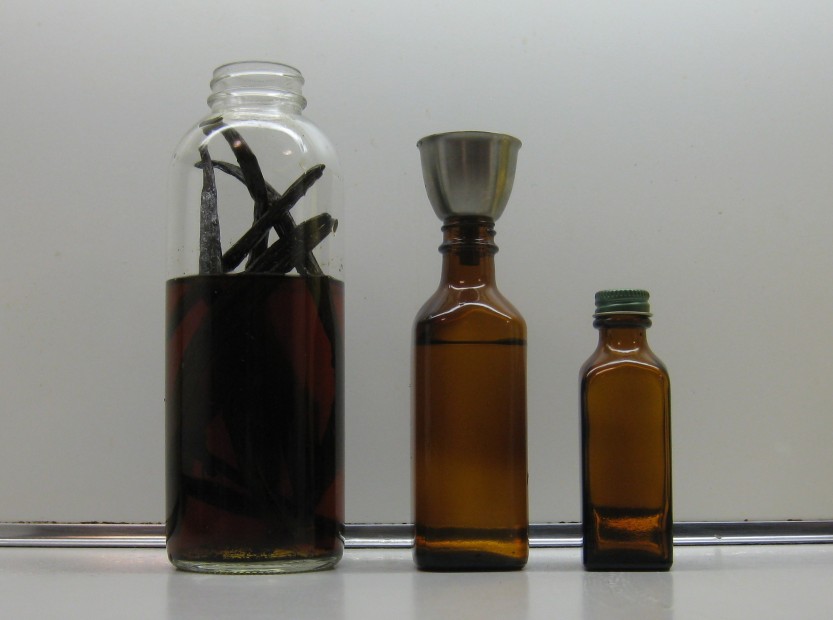 Because I like to make things from scratch and re-use anything I can, I’ve recently been labeled “hard-core.” I take that as a compliment even though it was a remark from a pair of co-workers trying to figure out just what was in those jars that I left as gifts.  Maybe I better add instructions in the future. One of my great discoveries of 2009, a year that I wasn’t otherwise fond of, was how to make vanilla extract. It’s not that it’s a mystery, but I never took the time to concoct it well in advance of when I would use it. I had the same problem with preserved lemons until I got in the groove. Vanilla extract steeps for two months, preserved lemons for weeks, depending on the kind. See what I mean about thinking ahead?

The other issue with the vanilla was the cost and the quality of fresh beans. I found the answer in an eBay store called Vanilla Products USA. They offer a variety of assortments in bulk, including sampler packs, bonuses etc. I kept it simple and bought good quality 6” Madagascar Bourbon Vanilla Beans and Gourmet Tahitian Vanilla Beans. Bourbon doesn’t refer to the liquor, but to an island once called by that name. Tahitian vanilla, which supposedly originated in Mexico like Bourbon, is quite different in flavor. In the future, I will steep them in the same solution to check out the difference, but this time, I processed the two totally differently.

Unlike some of the fancy stuff from Williams Sonoma, which contains sugar, I made the extract with only beans and booze. Using a ratio of three beans to one cup of liquor, I steeped Madagascar Bourbon beans in bourbon (seemed only fair) and Tahitian beans in vodka. The proportions came from Joy the Baker’s web post in July. The beans were split vertically but not cut through, added to a jar with a tight lid (I used a Kombucha bottle for one and a canning jar for the other), stored in a dark cupboard, and shaken up every week or so. 60 days later, we had lovely, aromatic extract. Now I’m amazed at how much vanilla extract I am capable of using. And I even had some to put in tiny dark bottles for gifts.

The homemade stuff is strong, so go lightly when adding to your favorite recipes. My next experiment is to see if I can top off the bottles and add more beans, rotating between the Bourbon and Tahitian beans. The former were more mellow but I’m not sure if it was because of the beans. The vodka could have made the other one a little harsh.