I splurged on my last trip to the health food store before the big Covid-19 lockdown 7 weeks ago.  While busy stocking my pantry with essentials, I came across a bin of organically grown large kumquats called Centennials. Unlike the thumb-sized pale orange ones that arrive around the winter holidays, these were about 1 1/2 inch long and brighter orange.  While I usually pickle the little ones to add a spark to winter salads, these called for marmalade. (So did the similar yellow orbs called limequats that I experimented with last year.) 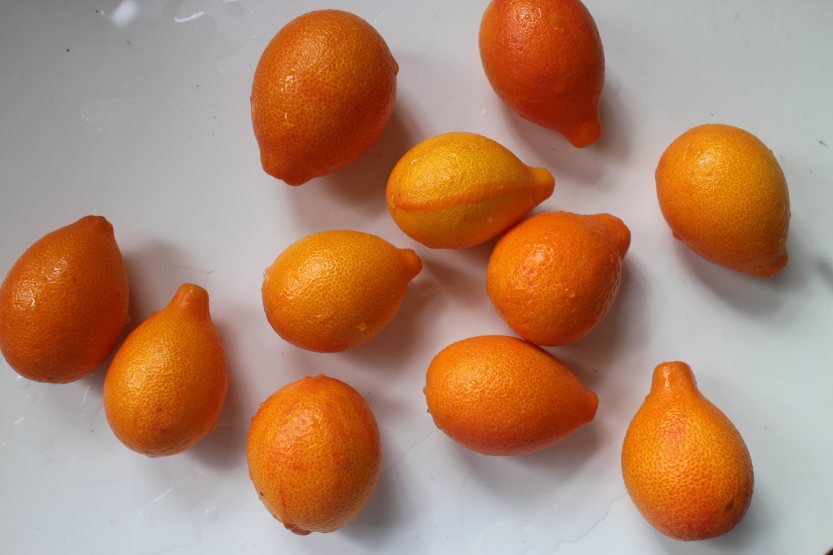 As with all marmalades, the upfront preparation is important. After washing and thoroughly drying the fruits, I cut them into thin rings, reserving the pits and diced the rind with little flesh attached. I added the juice of a lemon since kumquats are relatively dry.  The seeds and lemon rind went into a muslin sack since they’ll make plentiful pectin. While I made the marmalade in my normal way,  the large ratio of rind, pith and seeds to flesh meant that it gels strongly. It’s not obvious while cooking, the slightest wrinkle when testing the gel means that it’s probably done. It will continue to set.

The marmalade was very fruity, almost floral and quite delicious. Although they seem similar, kumquats are not citrus and you won’t get the slightly bitter, puckering effect that distinguishes an orange marmalade.

When ready to make the marmalade,  set a saucer in the freezer to cool and, if you intend to can it, prepare jars for water bath canning. Measure the kumquat mixture and add half of that amount of granulated sugar. In a large wide pot, bring the mixture to a boil and cook until a small drop placed on the frozen sauce is wrinkly to the touch.  This took 8-10 minutes.  Remove the muslin sack and jar the marmalade.

(If canning,  place in hot jars, seal with scalded two-piece lids, and cook for 10 minutes in the covered canning kettle after the water returns to a  boil.  Turn off the heat, remove the lid and let sit for 5 minutes before removing the jars to a counter to sit undisturbed until cool.)