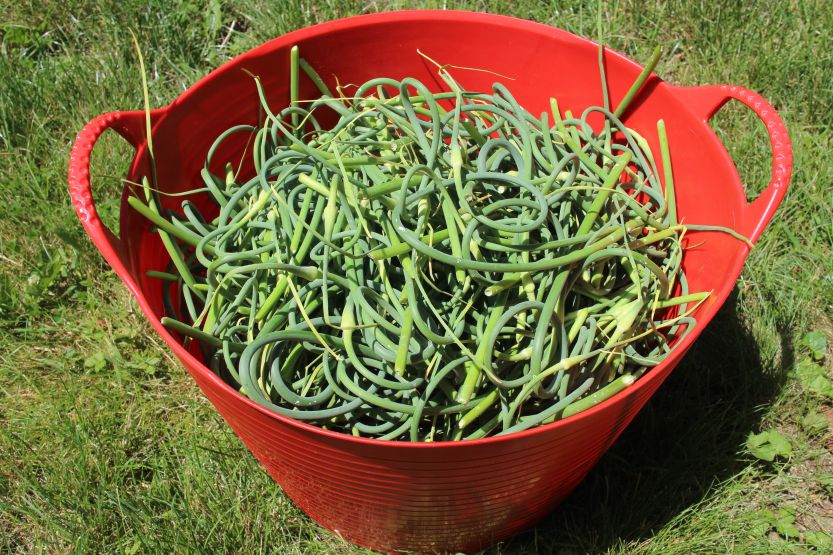 I could write a book entitled “365 Ways to Use Garlic Scapes.” We grow multiple types of hard neck garlic at our little New Jersey farm. These include Porcelains like Music, Turkish Giant, Georgian Fire and German Extra Hardy; Purple Stripes like Deerfield, Duganski, Belarus and Chesnok Red, and even a few Rocamboles, mostly German Red. There’s one we call Soup since it originated from our local health food store, and we don’t know its name.

The crop of garlic scapes that used to fill a big bucket now yields a few bushels since we’ve been replanting most of the harvest over a few years’ time. There are only so many garlic scapes that you can sell or even give away, and we have gotten inventive about how to use them in this season and store them for the future.

For those who don’t know, garlic scapes are the stems and flowers of hard neck garlic. They shoot up as the garlic bulbs (the part you see in the grocery store) start to form. Once the stalks curl and before the flowers start to plump, we cut them off to allow the plant to put its energy into the bulbs.

Actually, I may not be completely correct about the garlic you see in the store. Our local organic produce shop sells hard neck garlic but traditionally, it’s soft neck garlic that you see in braids or heaped in piles. Garlic grows naturally in Central Asia, notably in the Caucasus Mountains between the Black Sea and the Caspian Sea, an area that was part of the former Soviet Union. While immigrants brought garlic to North America from the “old country,” places like Germany, Poland and Italy, the multiple hard neck varieties we have today are recent arrivals. According to Bob Anderson of Boundary Farm, a Canadian garlic grower, the USDA had been asking the Soviets for years to gain access to the garlic growing area in the Caucasuses, but had been consistently denied because that’s where missiles were located (Spies ‘R’ Us?) In 1989 as the Soviet Union was coming apart, the Americans finally were able to go there and bring back numerous varieties, which were propagated into what we have today. Cool story. Someone should validate it. 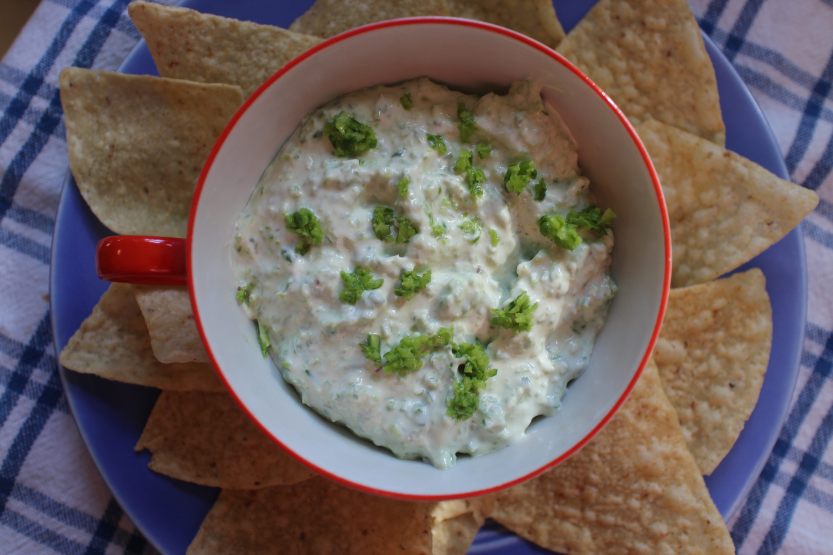 The easiest and most versatile way to preserve garlic scapes is to grind them into “pesto” (meaning a paste). I chop scapes into manageable lengths and place in a food processor with a few glugs of olive oil and Kosher or sea salt. Ingredients don’t have to be precise. I tend to leave the texture coarse and not too oily since it will be a base for other dishes later on. I am always amazed at how well the scapes keep their bright green color. Besides, they freeze well. I pack the pesto into small plastic containers (4 oz or ½ c) and keep them for months in the freezer.

Trim the woody end and the blossom bud from the garlic scapes and cut them into 2-3 pieces. Place them in a food processor with a large pinch of salt and a glug of olive oil. Whir until well chopped (how well is a matter of taste). Combine the scapes with honey and sour cream, check the seasoning (I sometime add a little Korean red pepper) and serve as a dip.