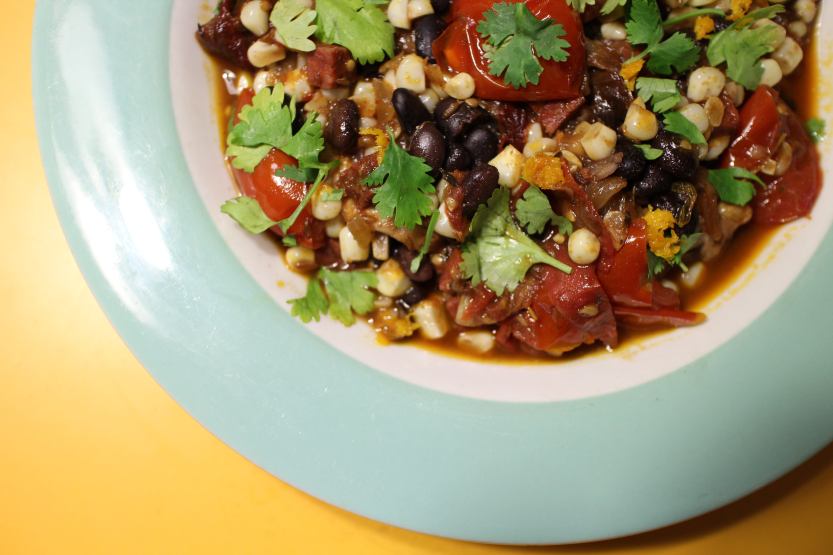 I’m on a roll with corn and beans. As the corn stalks become sere and the air becomes September-crisp, we feel the urge to savor the last corn of the year while ramping up for our winter fare of dried beans. We transform the corn into salad, chowder, fritters, and now — chili. Instead of adding store-bought chili powder to a chili base, I have found it more fulfilling to use good quality Spanish chorizo sausage as an ingredient, along with freshly toasted and ground cumin seeds, and smoked and regular paprika. Fresh hot peppers grow seasonally with corn and provide a genuine spunk that the ground stuff can’t muster. Also, this is a great way to use excess cherry tomatoes, which retain their presence in the sauce. While this could be a year-round affair (with or without the corn), there’s something gratifying about making it from this week’s harvest.

I normally would wing a recipe like this, but I happened upon a version of chicken chili by Yotam Ottolenghi, one of my favorite chefs on the planet. I regularly read his column in The Guardian and have literally cooked my way through Jerusalem, a Cookbook, which he co-authored with his business partner Sami Tamimi. I added the corn to his stew. He was teaching a lesson on corn tamales and chicken stew was the base. I went for the stew but I think I should try the tamales while fresh cornhusks are still around.

This is a good make-ahead dish since it keeps well and improves in flavor after a day of rest.

1 – 1¼ lb boneless chicken thighs, trimmed of all fat and cut in half

Sprinkle salt on the chicken and set aside. Meanwhile assemble all the other ingredients

Sauté the onion in olive oil over medium heat until soft and just starting to brown, about 5 minutes. Add the garlic, thyme, both types of paprika, ancho chili, chorizo and fresh pepper and sauté for 2 minutes, pressing the ancho chili into the bottom of the pan to soften.

Add the chicken and cook for about 5 minutes, turning once, until both sides color.

Add the chicken stock, cover the pan and simmer for 10 minutes.

Remove the lid, add the tomatoes, vinegar and beans and simmer, uncovered for about 15 minutes until the tomatoes have broken down and the sauce has thickened.

Season to taste with salt, and stir in the orange zest and cilantro before serving. Serve with sour cream if desired.