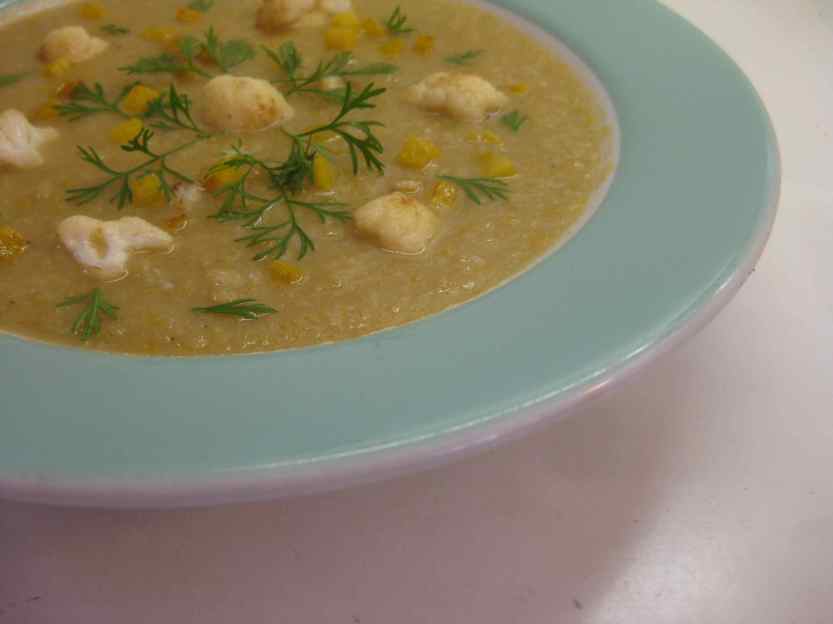 Super-Storm-Sandy soup. A combination of melting vegetable broth from the freezer and seasonal vegetables saved from flooding or freezing fields.  Between our CSA and our own garden, crops are being harvested with today and tomorrow in mind. The same goes for the refrigerator and freezer section of my pantry.  Premature harvests.  Long-term storage cut short.  Given the devastation of places in New York and New Jersey closer to the shore than we, this is only a minor inconvenience. Turned to advantage, it gave me the opportunity to assess the usefulness of what I’ve been storing and why.  It’s resulted in soup after soup, at least. 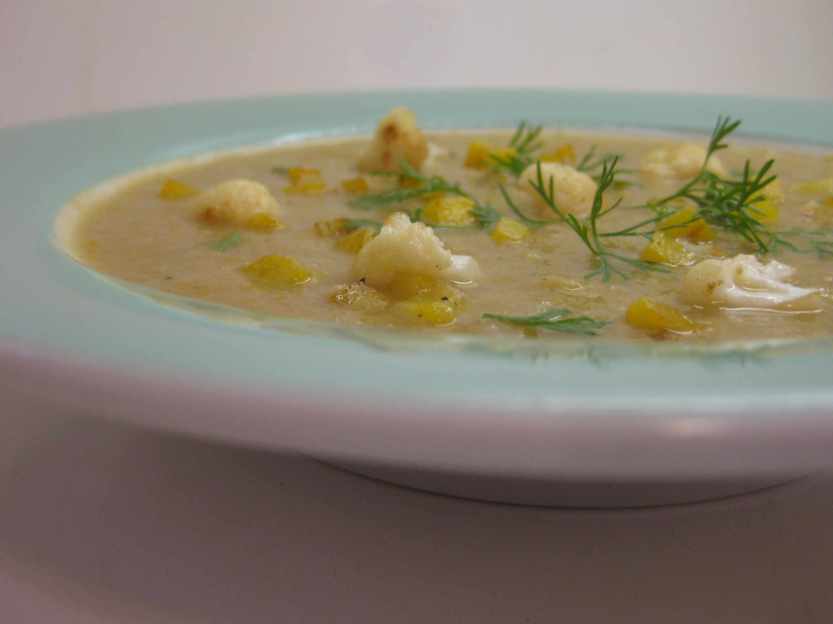 While we’ve been harvesting beautiful Nantes yellow carrots from our little kitchen garden one by one, the whole row was yanked last week.  Then there were the two heads of cauliflower from our CSA. And the need for soup on an uncharacteristically balmy day as we cleaned out the garden and planted cover crops for the winter. I started out considering a curried cauliflower soup but the defrosted broth – corn broth with a hint of smoky ham hock – beckoned the sweetness and lingering spice of garam masala. Any broth or stock would work so long as it is light enough not to overwhelm the delicate cauliflower.

Note that you can use the core of the cauliflower, not just the florets, much like you should use broccoli stems. Discard the woody parts and slice the centers thin, adding them to the aromatics – onion and carrots – to tenderize them before adding the florets. As with other light pureed vegetable soups, I added a small potato for texture and creaminess.  While I wouldn’t freeze this because of the potato (which would transform in texture), the soup improved in flavor after a day or so.

1 tbsp butter or vegetable oil or a combination

1 large carrot, chopped into ½-inch pieces, dicing some for garnish

Cut the florets from the cauliflower, reserving a few tiny ones for garnish. Remove the woody portions of the stem and core, and dice the remainder.

Lightly cook the onion in the oil or butter in a large saucepan until translucent. Add the garam masala and stir to combine well. Add the carrot, potato and diced cauliflower stems and cores, stir the mixture to coat the vegetables with oil and cook very slowly, taking care not to brown the vegetables, for about 4 minutes to soften them slightly. Add half the liquid, cover the pan, and simmer until the vegetables are nearly tender, about 15 minutes. Add the cauliflower florets and addition liquid just to cover the mixture and continue to simmer until the cauliflower is very soft, about 10-15 minutes.

Puree the soup with an immersion blender or in a food processor. Return to the pan and adjust the seasonings.  Serve hot.