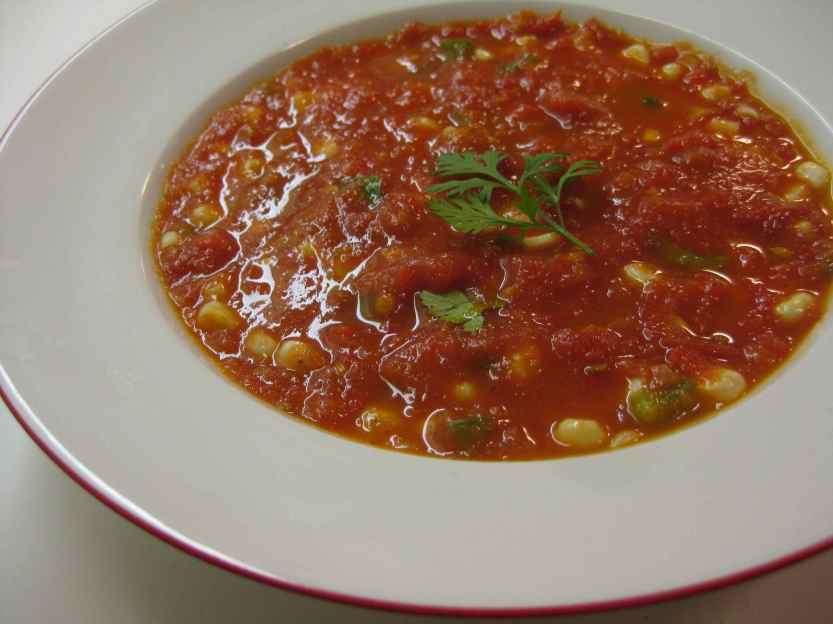 Pure August. The abundance of tomatoes, corn and peppers is upon us, despite the terrible tomato-growing season. This simple soup has a tomato and red pepper base seasoned with chili powder and cumin. The red pepper gives the tomatoes an instant density and mellowness that would be achieved only after hours of cooking the tomatoes alone. Green bell and jalapeno peppers are sautéed until tender and stewed with freshly cut corn, and then added to the base. This is reminiscent of cold season vegetable chili, perfect as our nights turn cool, but it has the lightness that we appreciate in summer fare. If you wanted to serve this as a vegetable chili, simply boost the spices and increase the proportion of corn and peppers to tomato.

1 tsp chili powder of your liking

Kernels from 1 ear of corn

As you prefer, either peel, seed and chop the tomatoes, or just chop them. (You’ll puree the soup later so leaving tender skins on will not affect it much.)

Heat the oil in a large saucepan over medium heat. Add the red pepper and onion and sauté until soft. Add the  cumin and chili powder and cook for a few minutes.

Meanwhile, sauté the green pepper, jalapeño and corn in a little olive oil until they are crisp-tender.

When the tomatoes are thoroughly cooked, puree the mixture in a food processor and return to the saucepan. Adjust the seasonings. Add the peppers and corn and a little cilantro, and cook until the corn is completely tender