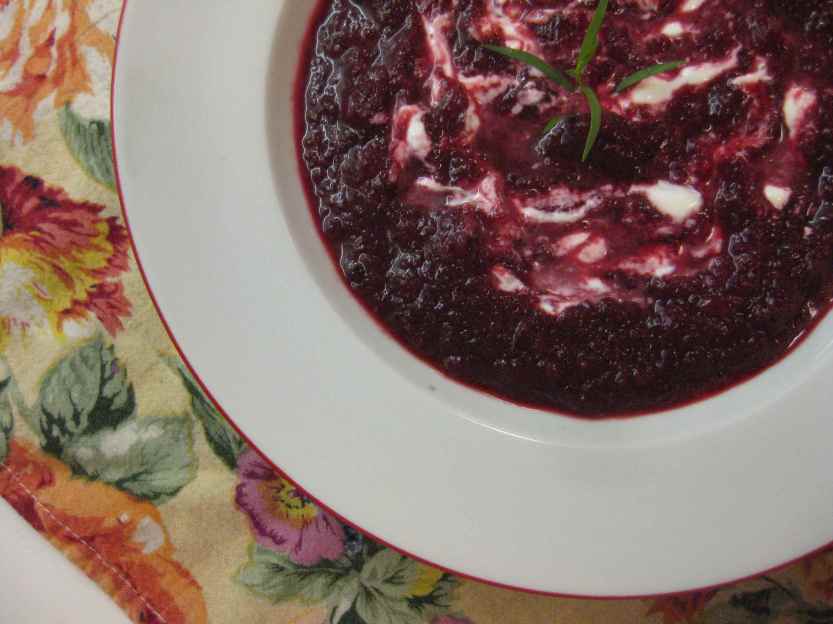 I discovered a new vegetable broth, my latest “favorite.” Made with the red stems of beets and the greens of leeks or spring onions, it has all the flavor and color of a light beef stock but it’s entirely vegetarian. Lightly salted, it could pass for consommé. In fact, I tried it out on a few family members who agreed with me. Making vegetable broth is a cinch. I tend to use complementary ingredients, things that might work together in a stew, and then not too many. Here I washed and chopped the stems from a couple of bunches of fresh organic red beets and cut the dark green tops off of two small leeks, washing them well and chopping them coarsely. Covered with salted water two times the depth of the vegetables, the mixture cooked for about 30-40 minutes.  It keeps, refrigerated, for a week or so, which allowed me to make two soups with it. 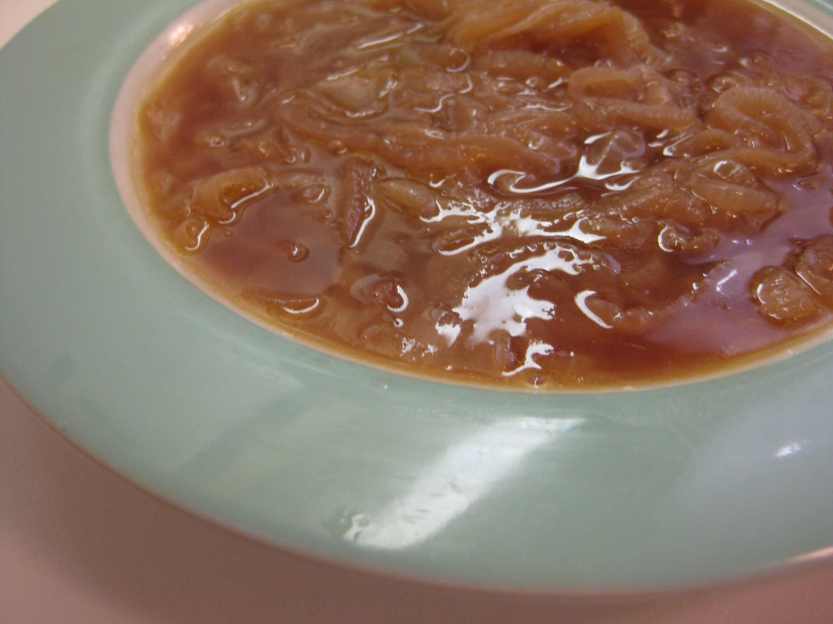 Our CSA distributed four pounds of large torpedo onions that were light red, juicy and not too pungent They were not suitable for storage and should be refrigerated and used in a couple of weeks. They were perfect, light companions for the beet stem broth and made a terrific light and flavorful summer onion soup. I used two large onions and about two cups of broth. To prepare the onions for soup, cut them in half vertically and then slice them thinly crosswise. Place a combination of butter and oil in a saucepan and slowly cook the onions until they collapse and start to brown, about 20-30 minutes. Stir them occasionally. Be careful to keep the heat low enough so that the onions do not burn. (If you were using yellow storage onions, add a pinch or two of sugar to caramelize them at the end. These onions were sweet so they didn’t need sugar.) Add the broth and cook for another 20 minutes. Serve with cheese toasts. By the way, you could make the vegetable broth in the length of time it takes to cook the onions.

The second soup used two large beets from the weekly CSA haul, combined with a large reddish torpedo onion and the beet stem broth. I served the soup both hot and cold, like a summer-time borscht, marbled with a delicious tarragon cream. To make the soup, cook 1 large diced onion in a little butter and olive oil until translucent and add 2 large diced cooked beets (or grated fresh beets) and broth. If using cooked beets, you will need about 2 cups of broth; for raw beets, the cooking time will be longer so use more broth, about 2½ cups.  Cook until very tender, 30 minutes or so, and puree with an immersion blender or food processor.

For the tarragon cream, fold snipped fresh tarragon into sour cream and let it sit for 15 minutes. Add a little tarragon vinegar (or white wine or cider vinegar) to thin it. Stir it into the soup or add a dollop on top.