Now that the local growing season is winding down, I am harvesting the remaining herbs that won’t survive the winter and preserving them. Preserving herbs is an ongoing process all summer and fall, especially since the tender ones like basil are gone, and other like mint are past their most aromatic stages. In the 6 preceding posts in this series, I’ve preserved herbs in vinegar and salt (whole sage leaves), dried them, frozen them as pesto, and turned them into jellies and syrup. There are more ideas to come.

Every year, I think that I am going to overwinter my potted rosemary and sage, and every year, they don’t survive. I would bring them inside but the pots are too big and the rosemary tends to develop spider mites. This year, I decided to harvest the leaves and either use them or preserve them. The uses were easy: I canned tomato-orange sauce with rosemary and a second batch of husk cherry jam with rosemary, both amazing additions to the pantry.

To preserve rosemary and sage, I followed an excellent recipe from David Lebovitz, who learned it from a friend. (He called it Italian herb rub.) Rosemary and sage leaves are finely chopped and combined with garlic finely chopped with sea salt (my own twist on his technique). The whole mix is dried on pans for a few days in a non-drafty room or in an unlit gas oven (another twist of mine since it was too humid in my house). The heat from the pilot light creates a great environment for slow drying.  This turned out to be a great combination. 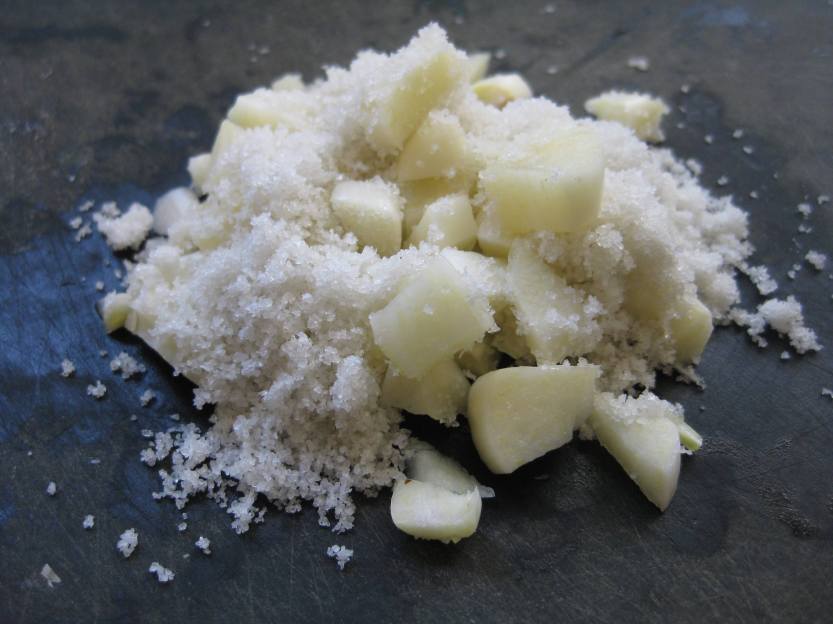 Inspired by Heidi Swanson, I also made celery salt, experimenting with several variations: organic Pascal celery (supermarket variety), organic celeriac leaves (from our CSA) and Chinese celery (grown by organic methods in my in-town garden).  The Pascal celery included the darker outer leaves and the pale yellow inner leaves, yielding a fine, colorful combination. I combined the robust celeriac and Chinese celery in one batch.  For the celeries, I used a flaky Maldon salt, cutting down Heidi’s proportions. She calls for roasting in a 350-degree oven. I was skeptical, but it worked.

I bet these need to be stored airtight and in the dark. All versions are great. I will enjoy them all fall and winter (if they last that long) combined with olive oil as marinades for meat or roasted vegetables. At the end of our season now, I used the celery salt to embellish corn on the cob. Yum.

Finely chop the sage and rosemary (by hand or pulsed in a food processor). Chop the garlic with the salt, until fine but do not turn into a paste. Combine all ingredients and spread them out on baking sheets. Either air dry them indoors away from sunlight and drafts for 2-3 days, or in a gas oven (with only the heat of the pilot light) for a day or so, until the mixture is completely dry. Store in a dark place in an airtight container.

Preheat the oven to 350 degrees. Spread the celery leaves on a baking sheet and toast for about 5 minutes, or until dry but not browned. Remove from the sheet and cool. You can slightly crumble the leaves or keep them whole. Add flaky salt, about half the amount of salt as leaves. Store in a dark place in an airtight container.