After a few seasons of trying, I am gradually improving my pickled asparagus and this one looks like it will be the best yet. Last year I made curried pickled asparagus using ground spices and while the taste was good, the powdery substance created a slurry that I thought was unattractive. So this year, I decided to use whole spices. The top three spices in curry are typically coriander, cumin and fenugreek, plus turmeric, which is a root vegetable. We can get fresh turmeric here, but I used powdered since I had it on hand. I added a few fennel seed for sweetness.

Usually I pickle the tops of asparagus, but this time I tried the bottoms. I had made five pounds of asparagus to serve with an orange and dark sesame  mayonnaise for a large cocktail party in New York Saturday evening. The asparagus had been picked that morning and was so fresh that it blanched in an instant. Since I was arranging the stalks like bouquets in glass vases and since they were finger food and couldn’t be too long, I cut them all to about 6-inch length, leaving 3 or so inches behind. The entire stalk was fresh and green and there was no woody base. Not wanting anything to go to waste (the trimmings went into soup), I decided these would make swell pickles, just the height for 4-ounce canning jars. My first task in this canning exercise was to sort the asparagus stalks into groups with similar diameters and then to cut them in identical lengths.

(Off the subject… the asparagus was picked by a farmer and sold by the bunch at the farmers’ market. I wonder whether the excessively long woody part you find in grocery stores is there because it’s keeping the stalks from drying out because of the long “shelf” time or because it’s okay to have waste since they’re being sold by the pound.) 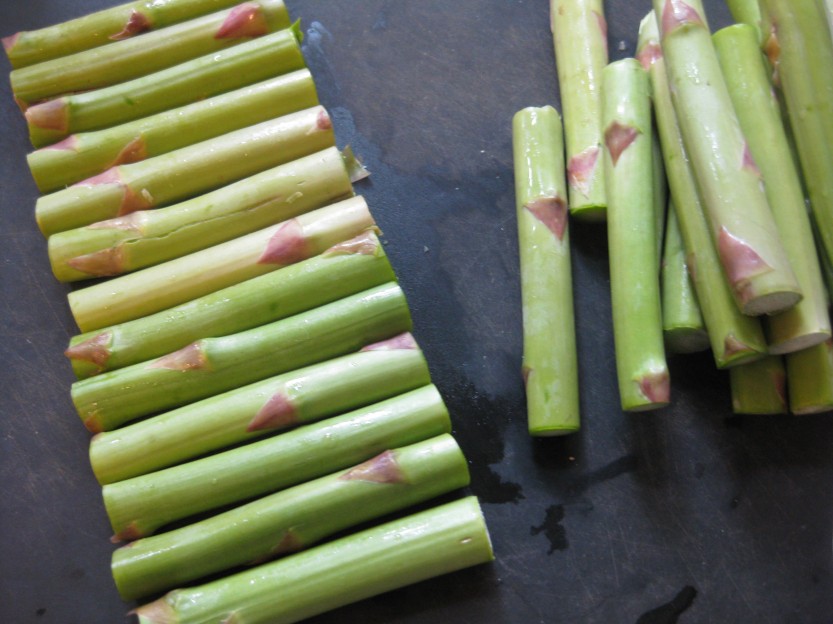 One of the difficulties with pickling asparagus is that it expands when it’s canned. It also tends to float. While it’s preferable to cram the stalks in the jars tightly, if they’re too tight and/or there’s not enough headspace (the space between the contents and the lid), there could be several problematic developments. One is siphoning, when the liquid leaves the jar during the water bath canning process (remember, the lid is not fully sealed to a vacuum until the end.) This situation leaves the stalks exposed to the air in the jar since they are not being covered by liquid. That isn’t a danger in a completely sealed jar, but the contents can spoil so it’s best to refrigerate the jar. Also, if the stalks are packed too tight, there could be air space trapped inside. The stalks might therefore float above the liquid into the headspace after canning. Also not a great preserving result, so refrigeration is the solution again. 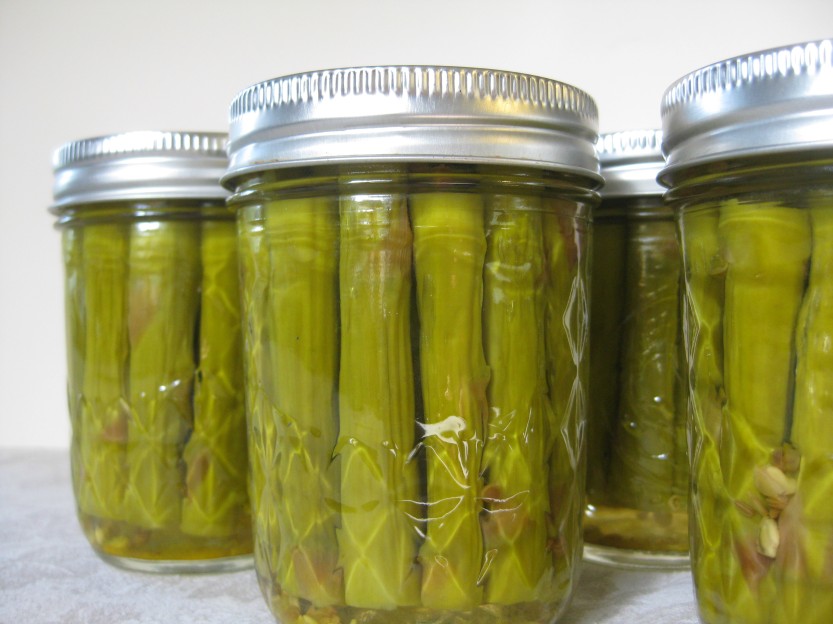 This time, my stubby little stalks floated slightly, but not above the liquid line, since I did not pack them too tightly, poked the jar (careful not to get the asparagus) to get rid of air bubbles, and left ½-inch headspace. So far so good. After four weeks, I can crack them open to sample the spice level. Since the local season is so short, I may end up making notes for next year, which is why it has taken a few seasons to get through this process.

Asparagus stalk bottoms, trimmed to fit slightly more than 1/2 inch from the top of jar, in enough quantity to fit the number of jars x 1.25 (they shrink when cooked)

Prepare the jars and the water bath canner.

Fill a large shallow pan with water and bring to a boil.  Separate the asparagus into batches according to thickness. Plunge each batch of asparagus into the boiling water for about a minute. Do not overcook. Plunge the cooked asparagus into ice water and drain immediately.

Pack the asparagus and spices into the warm jars, relatively tightly.

Stir the turmeric and salt into the 1 c water and cook at medium heat until dissolved. Add the vinegar, bringing the liquid just to a boil. Immediately pour over the jarred asparagus. To cover, but leave ½-inch headspace.  Insert a chopstick gently between the asparagus stalks to release any air bubbles.

Clean the rims, cap the jars and place in a water bath canner. Process for 10 minutes after the water comes to a boil. Remove the lid, turn off the heat and let sit for five minutes before removing the jars to to rest undisturbed until cool.

Cure for 3-4 months before testing for taste. If the jars don’t seal or if the liquid siphons and/or asparagus floats in the head space, refrigerate them. Otherwise, the pickles will keep for about a year.