When I think of the year-end holiday season, I don’t think of a large ceremonial Christmas dinner but rather of the smaller meals: breakfast, brunch, lunch, a little supper, and most of all, milling-around food, grazing. I think of a medley of small bites, related but diverse, balanced in color, texture and taste, artfully arranged, casually eaten, often on little plates or bowls, while people are simply hanging out and chatting. Friends drop in, kids make spur-of-the-moment plans, and the bustle of the season calls for little meals, quickly assembled. Maybe it’s just snacking legitimized on a grand scale.

So when I saw the ingredients for Paper Chef 47 (a monthly blog event that I follow but never entered since this one is only a month or so old), I thought, great! — mustard, thyme, saffron and ham — a really good start on a holiday snack-fest. The first idea that came to my mind was a certain chard tart that I make, seasoned with saffron. I would have to add bits of ham to the filling and thyme and mustard to the crust. Easy, predictable. The second thought was a version of pissaladiere, a French onion tart often made with saffron and thyme. Substitute the traditional anchovy lattice with ham strips glazed with mustard, and that’s it.

But no, that wouldn’t be a challenge, just a variation. So instead I made a group of little just-concocted but familiar items that are related and progressive in the way that they are cooked, meaning that I used and re-used saffron- and thyme-infused chicken stock (could have been vegetable stock) until it was all absorbed. I didn’t want to waste any of the saffron liquid. Saffron’s costly but a little does go a long way, and luckily for me, I had some on hand that needed to be used before its power pooped out. The little pinch that I had left went into the olive oil used to roast some of the vegetables. I used two kinds: threads from the spice drawer and a packet of good-quality PINA saffron powder, which is basically pulverized threads.

What I prepared: saffron- and thyme-infused leeks and potato slices wrapped in Serrano ham, cauliflower and potatoes roasted in saffron oil, plus simple slices of ham and raw and roasted pepper, all of which are served with a spicy mustard aioli and aioli spiked with the smoked Spanish paprika called pimenton. I also made ham- and cheese-stuffed rice balls, using the balance of the flavorful vegetable cooking liquid. Plate it beautifully, pour the wine, and you have a mini feast of appetizers, vaguely like a Spanish tapas. So who needs a big holiday meal after that? 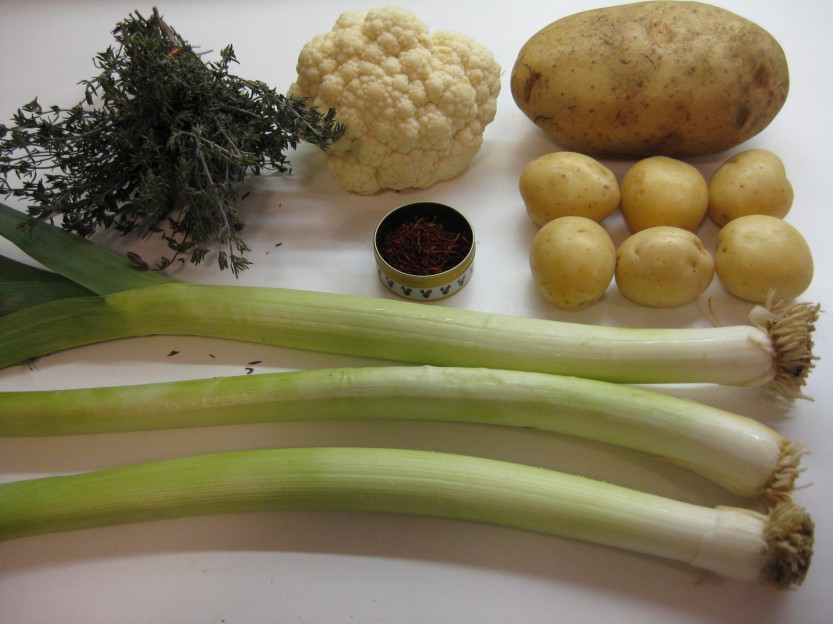 In terms of process, I made the basic ingredients in the morning, and simply did the last minute roasting/frying on a couple of items that are best served hot. Omit the rice balls and it can all be ready an hour or two in advance of serving. Also, I could have left the rice balls for another day, or simply made risotto from the rice and flavorful broth. That’s really the only thing that would need to be made at the last minute. The amounts I made should serve 6-8, except for the aioli, which is a lot more.

In a food processor with motor running, beat the eggs, garlic and mustard until light and starting to thicken, 1-2 minutes. Add lemon juice and a little salt, and then, with motor continuing to run, dribble the oil through the chute slowly until the mixture is thick. Adjust garlic, salt and lemon juice to taste.

To serve with my appetizers, I stirred pimenton into one portion and more mustard into the other. This makes much more than needed for this event, but it keeps for about a week or so.

3 leeks, ½ to 3/4-inch in diameter, cleaned (if using larger ones, half lengthwise)

4 cups light homemade chicken stock (i.e., made from a raw not roasted chicken)

Prepare the vegetables. Meanwhile, pour the stock into a shallow pan, bring to a boil, add saffron, thyme and a little salt and cook to combine 1 minute. Add leeks and potato slices and simmer, partially covered, until tender (potatoes will cook faster than leeks). Remove vegetables from the liquid and set them aside to cool, reserving the cooking liquid. Cut leeks into 1½ pieces. Slice the ham vertically into strips that wrap around the pieces of cooled potato and leeks.  This can be made in advance. Serve at room temperature with either mustard or pimenton-spiked aioli.

1 russet potato, peeled and sliced lengthwise into strips or wedges

Chicken stock with thyme and saffron, from the previous recipe

½ head of cauliflower, florets cut lengthwise into ¼ to 3/8-inch slices

Olive oil with a pinch of saffron powder, well stirred

Prepare all ingredients in advance for last minute roasting in the oven. Boil the creamer potatoes in salted water for 5-7 minutes or until tender but barely cooked (poke with a turkey trusser or cake tester). Drain and set aside to cool. Simmer the potato wedges in the chicken stock until tender but not soft. Remove and set aside to cool, reserving the cooking liquid. Slice the cauliflower.

Twenty minutes or so before you want to plate the food, preheat the oven to 450 degrees. (I set this time because of the rice balls, but otherwise, these could be made an hour in advance.) Place each type of vegetable in its own area on baking sheets. Brush each piece lightly with the saffron oil. Sprinkle salt on all and add thyme to the creamer potatoes. Place in the oven and roast until golden. Each will roast for a different length of time, so pay attention.  The cauliflower will go fast and you do not want it soggy on the plate so it should be removed before being completely cooked (being stingy with the olive oil helps too). Since the potatoes are pre-cooked, you’re just trying to get a crust on them. If you are including roasted peppers on your platter, like I did, this is the time to roast them.

Serve warm or at room temperature with either mustard or pimenton-spiked aioli. 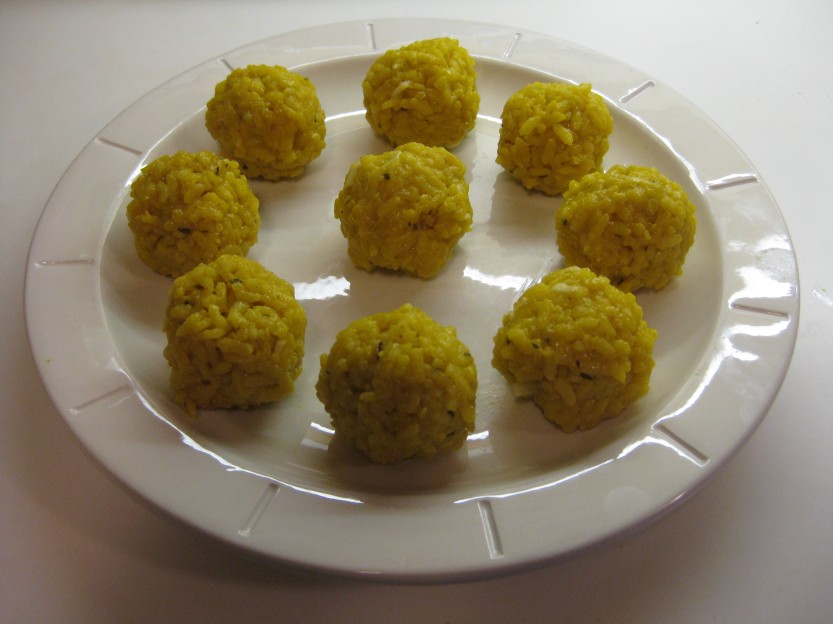 These are similar to what Italians call arancini, “oranges” made with rice. I never made them before, so I improvised from a couple of sources and followed no one’s in particular. This dish is like breaded and fried risotto with a surprise (ham and cheese) in the middle. You could make them as mini-cakes without the filling. These were good, filling, but a little different from the other items. So I could have left them for another day, or simply made risotto from the rice and flavorful broth.

Remaining egg while from the aioli, lightly beaten (or 1 egg if making from scratch)

Cook the rice in the stock and set aside to cool. When cook, beat in the eggs. Form into balls, each about the size of a golf ball, placing a small piece of ham and a little cheese in the middle. Refrigerate to firm. If left in the refrigerator for several hours, take them out about 30 minutes before you want to cook them or they won’t warm all the way through. Dip them in flour, then in the egg, and finally in the panko or bread crumbs. Heat enough vegetable oil in a deep pot to about halfway up the sides of the balls, cooking until well-browned, about 5 minutes, turning partway through to cook all sides. Serve as soon as possible after cooking.

I liked the blend of colors, all within a single range, and didn’t feel the need to add more green or any red ingredients to the platter. However, I did think that, with the aioli, I needed something raw, so I added cut-up mini peppers. I also used some oven roasted mini peppers, along with slices of Black Forest ham. I made enough for 6-8 people grazing and while everything fit on one 10×15-inch platter, it was too crowded. I ended dividing the food among several smaller dishes, but I could have served it antipasto-style on a large round platter. It all depends on where you’re serving this.